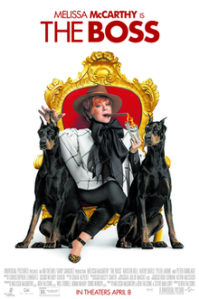 Scott, hide what you’re doing The Boss is coming.

Melissa McCarthy is a boss no one wants to mess with. Let’s recap.

We’re introduced to Michelle Darnell (Melissa McCarthy), a self-made millionaire who lives the high life giving motivational speeches on a stage with dancers and a flame-throwing dragon. She thinks little of those around her, especially her assistant Claire (Kristen Bell) who is (we’re told again and again) a single mother. Darnell doesn’t ride high forever as her nemesis Renault (Peter Dinklage) discovers she has committed insider trading and turns her in. Her world is turned upside-down when she lands in federal prison and loses everything, including anyone who might care about her.

When Darnell is released from prison, she has nowhere to go, so she ends up living with Claire and her daughter Rachel (Ella Anderson). Darnell’s plan is to recapture her former glory as a successful businesswoman. She discovers that Rachel’s girl-scout-like group, the Dandelions, sells cookies as a fundraiser, and she also discovers that Claire makes incredible tasting brownies. Darnell’s scheme is to make a fortune by creating a rival group that aggressively sells these brownies at a huge profit.

Scott, Melissa McCarthy has had a stream of movie successes over the last few years. There’s a common theme running through these films: female empowerment. Back in 2013 she starred in buddy-cop movie The Heat with Sandra Bullock. The following year she followed up with Tammy. And last year she burst out with Spy. While not all of these films were critical successes, they all display the lead character as a woman who takes control of her environment and succeeds on her own terms.

The Boss is no exception. In Darnell we are witness to a woman who grew up in an orphanage and was rejected so much that she concludes that “family is for suckers.” She strikes out on her own and creates a multi-million dollar empire. However, her lost lover exposes her for insider trading and she is thrown in federal prison for 6 months. The Martha Stewart jokes abound – there is no subtlety to the parallels. When Darnell has paid her dues, she has nothing left and none of the men she supported on their way up will help her. It’s a boy’s club and she’s missing the Y-chromosome.

You’re right about McCarthy’s repeated portrayals of strong, take-no-prisoners women who dare to succeed in domains usually reserved for males. Her persona is huge here, and I mean huge in all the wrong, Donald Trump kind of ways. We’re talking narcissism, exploitation, aggression, and cruelty. Yet McCarthy uses these character defects as a set-up for her character’s hero’s journey. Darnell must soften up and cultivate her humanity to truly transform as a person. Amidst all the silliness in this movie, we are witness to exactly this heroic transformation from Trump (or Stewart) to a compassionate human being who finds her connection to humanity.

So it sounds like I enjoyed this movie. At the level of hero transformation, yes, I was satisfied. But the movie itself is not particularly fun to watch. Many of the visual and verbal gags fall flat, and I think part of the problem is that The Boss tries too hard to be constantly funny rather than telling a story that doesn’t need to be constantly funny. There’s no denying McCarthy’s comedic talent, but she tries too hard here when her messages about women’s empowerment and de-Trumpification can stand on their own without the barrage of mediocre gags.

We disagree again, but not completely. On the Trumpisms – yes. But McCarthy is a master of slapstick comedy. There’s a scene early on where she wears lip-expanders that is hilarious. Just when I thought she had played the gag out, she pushed it further and I was howling. There’s another scene (also in the trailers) where Darnell is helping Claire dress for a date and they start bouncing each other’s boobs. I mean, it’s sophomoric, grade-school humor. But McCarthy is a master and I bust a gut. I want more.

This is a classic hero’s journey. Darnell goes from being a hard-core greed-addicted capitalist with no need for friend or family, to a caring individual who uses her talent for goodness and niceness rather than evil. There is no subtlety to this transformation, but it is sweet and done quite well for a slapstick comedy.

I was struck by the fact that Darnell is acting as the mentor in this story. She mentors Claire in standing up for herself, and she mentors the girls of Darnell’s Darlings in the ways of business. It’s pretty rare for us to see the Hero-as-Mentor. Usually the mentor is a secondary role. But in Darnell’s case, we see her not only mentor others but undergo a radical transformation as well.

Greg, I was struck by the appearance of a grand-mentor, whom we define as the mentor to the mentor. Kathy Bates plays the role of Ida Marquette, a woman who mentored Darnell many years earlier. We first saw a grand-mentor in Eddie the Eagle, where Christopher Walken played a classy, highly revered old grand master. In The Boss, nothing is classy and everything is brassy, thus we’re not surprised to see Ida Marquette show the same ball-busting qualities as her protege Darnell.

I agree that Darnell mentors Claire, but let’s not discount the possibility that Darnell and Claire are also buddy heroes who help each other transform. Darnell convinces Claire to dream big and leave her humdrum job, and then she also shows Claire how to build a business empire. In return, Claire teaches Darnell the lessons of humanity and interpersonal decency. Rachel also shows Darnell the importance of family and connection to loved ones. So the mentorship goes both ways between Darnell and Claire, as we see in many buddy hero stories — which is topic we dive into in our Reel Heroes & Villains book.

The Boss is a fun slapstick comedy by a master comedian. As an R-rated comedy you’ll want to leave the kids at home. But this isn’t for the kids. It’s a smart movie with heart made for adults by adults. Melissa McCarthy shines in a role that takes advantage of her big talent. I enjoyed her over-the-top humor and transformation into a Darnell who welcomed family. I give The Boss 4 out of 5 Reels.

Darnell is the lead character in this story, in my humble opinion. While you, Scott, saw this as a buddy story, I have to disagree as Claire played second banana the whole movie. Darnell’s young life as an unwanted orphan hardened her to emotional attachments. But her incorporation with Claire and her daughter Rachel melted her frozen heart. I enjoyed watching Darnell, but the hero’s journey suffered in favor of the comedic shenanigans. I can only award Darnell 3 out of 5 Heroes.

And Darnell as Mentor was an interesting case. On the one hand she shows all the girls in her brownie business how to stand up for themselves and how to run a successful company. But on the other she is a dark mentor showing them that anger and violence resolves all confrontations. It’s an interesting mix, but one that I can only award 3 Mentors out of 5.

The Boss is a wonderful movie only if you are a Melissa McCarthy fanatic with a high tolerance for 90 minutes of one ridiculous (and often mediocre) gag after another. Yes, McCarthy is a force to be reckoned with in Hollywood, and she does dare to portray women in powerful roles. I suspect that her films will improve if and when she evolves into a more dramatic actor. Doing so will enhance the effectiveness of her message of empowerment for women. For now, her movies veer close to resembling the forgettable canon of Adam Sandler, and that’s no compliment. I can only award this movie 2 Reels out of 5.

The hero story is actually the one strength of The Boss. Who doesn’t like seeing Scrooge soften up or the Grinch develop a heart? Such stories are always immensely satisfying, although this movie’s mediocre comedic elements put a huge dent in the immenseness. Having said that, I’m a sucker for people finding their compassion, and I also like the empowering effect that Darnell has on Claire. I’m willing to give these two heroic transformations a rating of 4 Heroes out of 5.

The mentorship is also rock solid, with each of our two main heroes offering important guidance and life lessons for the other. I also loved the appearance of the grand mentor who years earlier trained Darnell to become a successful business tycoon. I was alarmed, however, by all the dark mentoring directed at the numerous children in the movie. These kids were shown how to cheat and fight physically with others, and it was all presented as humorous. Not good. We’re left not knowing if these kids were ever un-mentored from this nastiness. Still, there is enough good mentoring to award this film a rating of 3 Mentors out of 5.