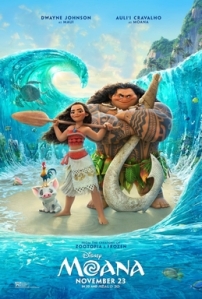 Well it looks like we’re going to review the latest Disney princess movie.

No reason to piss and moana about it. Let’s just get to it.

We’re introduced to young Moana (Auli’i Cravalho). She’s an eight-year-old girl living in the Peloponnesian islands. Her father is the chief and she’s the heir to the throne. Daddy wants her and her people to stay on the island where it’s safe. But Moana wants to journey out past the reef. Her father keeps her at bay until one day the islanders find that their island is dying.

Moana’s grandmother Tala (Rachel House) encourages Moana to follow her heart and shows the young girl a secret cave containing large seafaring vessels that their ancestors used to explore the vastness of the ocean. Tala gives Moana the heart of Te Fiti to which was stolen by Maui (Dwayne Johnson), and Moana’s calling is to replace the heart to restore life to the dying islands.

Moana was a surprise. I expected a pretty typical Disney princess damsel in distress movie. But Moana is a strong female hero with a mission to save her people. She’s not someone to be saved, but someone to save everyone else. The movie knows it is an atypical story because Moana repeats at least twice “I’m no princess.”

This film surprised me, too, Gregger. What a delight it is. I felt like I visited a set of Polynesian islands and mingled with the indigenous people. The craftsmanship of this movie is unparalleled, with ocean waves and vegetation springing to life in vivid detail. Most importantly, Moana raises several timeless themes of human existence, most notably the theme of the importance of maintaining a connection with nature and the theme of discovering one’s true identity. The film’s treatment of these themes is creative, original, and inspiring.

As you point out, our hero Moana is a wonderful character with whom both girls and boys can identify. She is drawn to the sea and becomes obsessed with the idea of venturing beyond the safe confines of the island lagoon. This movie challenges us all to look within our hearts to discern our true calling in life — a theme of heroism that is explored at length in the recently released Handbook of Heroism and Heroic Leadership. What impresses me is how Moana encourages us not only to discover our true individual calling, but to also discover the calling of an entire community of people. Who are we and what are we meant to do with our lives? This film dares to ask such big questions.

Moana is aided in her quest by the demigod Maui. Maui also has a goal – to find his magic fish hook. He believes it is what gives him his power. But in fact, he already has his power within him. Maui shows Moana how to pilot a canoe, how to navigate the waters, and how to be a voyager. It’s his guidance that ultimately allows Moana to save the islands and restore the goddess to her rightful place.

Yes, Moana’s two main mentors are her grandmother Tala and then, later, Maui. Tala helps her discover her mission, whereas Maui helps her execute it. Interestingly, Maui himself is mentored in a unique way by one of his tattoo images, which reveals to Maui what the “right” choice is in any given situation. Moana’s dad plays an interesting role in discouraging his young daughter from following her heart. I wouldn’t call her dad a dark mentor, but his tendencies toward “playing it safe” suggest an anti-mentoring role for him.

The father plays the role of the oppositional force, or antagonist. Not quite the villain, but he’s the voice in Moana’s head who keeps her back. He’s not a bad guy. He wants to protect her and his people. But his energies are misdirected. So, I wouldn’t call him the dark mentor, but he does offer the initial resistance that the hero needs.

I enjoyed Moana much more than I expected. After a string of successes that include The Little Mermaid and Aladdin, directors Clements & Musker have created a new kind of hero that boys and girls both can admire and aspire to. I give Moana 4 out of 5 Reels.

Moana has everything going for her. She’s smart, brave, adventurous, virtuous, and beautiful. She starts out uncertain in herself and grows to find the voyager within her. I do have a problem with Moana – she’s too perfect. A little darkness in a hero is a good thing. It’s a force to overcome and control. I give Moana 4 out of 5 Heroes.

Finally, the mentoring in this film was just wonderful. Her first mentor is her grandmother who helps Moana discover who she can be and sets her on her journey. Then Moana trades up to Maui who is in need of some assistance himself. Maui shows Moana how to be voyager she was born to be and ultimately to be the leader her people need. I give these mentors 5 out of 5 Mentor points.

Moana is one of the best movies of 2016. The film explores grand, sweeping themes of human yearning, and is equally grand and sweeping in its visual effects. We learn from watching this film that playing it safe in life is not an option as it only leads to death and decay. This is an especially important message for young girls in the audience who historically have not had as many worthy role models in the movies as boys have had. This movie will become a classic “must see” film for generations to come and thus earns the full 5 Reels out of 5.

Our hero Moana is an inspiring character and terrific hero in every sense of the word. I don’t see her as being too perfect, Greg. She is naive about the world and thus needs mentoring from her grandmother. She lacks seafaring skills and thus needs help from Maui. Her arduous journey compels her to acquire courage and resilience, and she not only transforms personally, she also transforms her people. Moana’s great heroism merits the full 5 Heroes out of 5.

The mentorship of the hero is exemplary, as we’ve both pointed out. Everything in this film is pretty much textbook, including these helpers and guides who shepherd our hero through life, assisting her in her mission to discover her identity and save her island. These mentors easily earn the full 5 Mentor points out of 5.