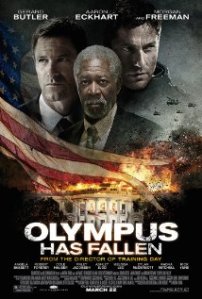 Going into this movie, I was really worried we would be seeing Movie Standards Have Fallen. But I was pleasantly surprised.

Olympus Has Fallen opens with Secret Service agent Mike Banning (Gerard Butler) prepping the First Family and his men to leave Camp David. The President (Aaron Eckhart), his wife (Ashley Judd) are piled into cars and they all head out into a Christmas snow storm toward a fund-raiser. They don’t get far when the President’s car collides with a fallen branch and is precariously balanced on the edge of a bridge.

The Secret Service agents all rush to the President’s aid. The First Lady is trapped in the car and Banning barely extricates the President before the car makes a fatal fall into the icy depths below.

We then fast-forward to 18-months later. Banning hasn’t recovered from the knowledge that he couldn’t save the First Lady and has been demoted to a lesser security position elsewhere in Washington.

One day a North Korean terrorist group storms the White House by air and on the ground. The President and several members of the cabinet are taken hostage in a bunker below ground. Responding to the attack, Banning finds himself alone in the White House, the only person in any position to save the President and prevent nuclear catastrophe.

Scott, this movie really had the potential to tank early and fast. But in a lot of ways it was like watching the original Die Hard movie, but with higher stakes and bigger and bolder special effects. Banning is the only man on the scene and has to save the day while dealing with incompetent and unsympathetic highers-up. And it also reminds me, in some ways, of Kevin Costner’s Secret Agent character from The Bodyguard who had to overcome nearly losing the President (Reagan in this case) to an assailant.

So combining those two older movies we now have Die Guard. It’s a winning formula. Part of its great appeal lies in our strong need to see heroes redeem themselves. The film does a wonderful job portraying Banning as highly competent and also quite caring, as he shares a close personal bond with the President and even befriends the President’s son Connor. And so when the First Lady dies, through no fault of Banning, we find ourselves rooting for Banning to mend his relationship with the President and regain his former stature.

I agree. Banning kicks ass and doesn’t bother to take names. He knows the White House inside and out and quickly determines the terrorist’s intent. Interestingly, the terrorists come from North Korea this time, not the Middle East. Which was a bit of a refreshing change, and quite topical as well.

If you like action, this new action hero won’t disappoint. But there’s not a lot of plot here, and quite a few plot holes. For example, a propeller-driven C-130 takes out two F-15 fighter jets.

But if you can overlook these flaws, you’ll have a nice roller-coaster ride.

Greg, let’s examine the Banning character. I’ve pointed out the redemption theme, which I like. But let’s go deeper. In my view, the Banning character suffers from the flaw of being too strong of a hero. What do I mean by that? For starters, he’s indestructible. No amount of serious injury slows him down. Could we at least see a limp? Second, there is no character who serves as his mentor to help him on his journey. Third, because he’s such a perfect specimen of a hero, even from the start, we don’t see much character transformation.

You’re right, Scott. This is what we in the writing world call a “Mary Sue.” He’s just so perfect that nothing bad happens to him. The writers are afraid to give him a vulnerability that the villain can exploit. All his problems seem to dissolve at the end of each scene so there’s nothing making his job difficult. Compare to John McClane from Die Hard who has to walk around on feet filled with glass. Also, McClane had the character flaw of being a “cowboy,” sort of a loner and wise guy. This weakness almost got him killed a couple of times in that movie.

While we’re talking about weak characterizations, the villain Kang (Rick Yune) really doesn’t have much villainy to do but beat up on the President’s cabinet, forcing secret codes from them. As we’ve said so many times before, a great hero needs a great villain. But we don’t see that here.

Good point. There aren’t many layers to this villain. I was craving for at least one maniacal laugh, or identifying mannerism, other than his North Koreanism. Too bland. The movie also had the usual cast of predictable stock characters. How many more times will Morgan Freeman play either God or the President? Does every army general have to be so stupid and pig-headed? One nice surprise was the character of Ruth McMillan (Melissa Leo), who played the Secretary of Defense. Her courage, and ability to take a good punch, were admirable.

I’m glad you mentioned her. So often women are played as hysterical non-characters. I think you can sum up her core belief by her wish that her epitaph read “she didn’t give up without a fight.”

Olympus Has Fallen is a good action-adventure with a somewhat flat hero character. I was entertained for a couple hours, but I won’t be rushing to see it again. So I’ll give it a solid 3 out of 5 Reels. Banning is a classic action hero, rugged and loyal. But I really can’t say that there was anything that stood out about him that made me want to *be* Mike Banning. So I give him a mere 2 out of 5 Heroes.

I think you’re being a little hard on Mr. Banning. He’s a pretty good hero trapped in an impoverished screenplay. I love the line in the film that best describes him: He’s going to do the right thing and he’s the kind of guy who will “move mountains” to do it. His methods are sometimes over-the-top and he’s a bit too perfect. But the strong theme of redemption shines through, and we’re left feeling very satisfied seeing him and the Prez become best buds again at the end. I give him 3 out of 5 Heroes.

The film itself, as you say, is pretty good and thus earns 3 out of 5 Reels. To get to four Reels, it needed a stronger villain and a less predictable supporting cast. And I’ll be curious if there will be a sequel. At this time I’m not certain it’s quite deserving of one.
Movie: