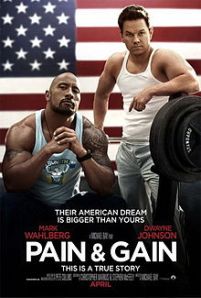 Greg, we just saw Pain & Gain. Remarkably, the film is based on a true story. I’m sure you’ll agree that the characters in this movie are not exactly heroes.

Not at all. We meet Daniel Lugo (Mark Wahlberg) who is a bodybuilder with a past. He gets a job helping the rich get fit. Lugo believes that letting yourself go is just unpatriotic. He determines that the only fair thing to do is to take the belongings of weakling and local Schlotsky’s owner Victor Krenshaw (Tony Shaloub).

Lugo and his two sidekicks, Adrian (Anthony Mackie) and Paul (Dwayne Johnson), kidnap Krenshaw and torture him into signing over all his assets to them. We witness criminal behavior at its dumbest level, as our trio of crooks make several inept, Three-Stooges-like attempts to kill Krenshaw. They fail and Krenshaw escapes, setting in motion a police investigation that soon leads to the trio’s undoing.

Scott, at first I thought director Michael Bay was setting up the three leads as anti-heroes, hitting back at the rich elite. But in fact, Lugo and his friends are just stupid. They have bought into the get-rich schemes of Asian telemarketer Johnny Wu (Ken Jeong) who preaches that most people are “don’t-ers” and only the successful are “doers.” By the time we get to the halfway point we realize that our heroes are in fact villains and the rest of the movie is testament to both their stupidity and ruthlessness.

Yes, this is one of the very few movies that is clearly a villain story, not a hero story. Most movies with villains as lead characters attempt to portray those characters sympathetically, or at least endow those characters with enough heroic traits that we root for them to evade the authorities. I’m thinking of The Sting, Catch Me if You Can, and 3:10 to Yuma. But in Pain & Gain, the lead characters of Lugo, Adrian, and Paul are clearly depicted as ruthless thugs and we definitely want them captured, despite the fact that we’re entertained (somewhat) by their atrocities.

In fact, the further into the film we get the worse their sins. And we are reminded through freeze-frames that this is a true story, which makes it all the more repugnant. I was disgusted at the depths of their villainy and how their ineptitude and naivety drove them deeper and deeper into dark behavior.

I was mesmerized by this film. The only thing that kept me glued to the big screen was the promise that this was a true story. Otherwise I would have thought it was merely an attempt at gross humor. The villains were buffoonish, especially the character of Paul who was a born-again Christian but still has no trouble roasting body parts. I give the movie 3 out of 5 Reels for entertaining me with an otherwise unbelievable story. I can’t give them a Hero rating since these are clearly not Heroes, so I give them 3 out of 5 Villains.

As a villain story, the movie is effective in portraying all the elements of the hero story operating in reverse. If this were a traditional hero story, Victor Krenshaw would serve as a father figure to Lugo, but in this film the father is a jerk and has no influence on Lugo other than to incite him. And in a normal hero story, Johnny Wu’s recipe for success would make him a positive mentor, but here Wu’s advice is used for evil purposes rather than for good. The one man blocking Lugo’s main goal is the investigator, Ed DuBois (Ed Harris), whom we’d normally call a villain for opposing the lead character, but in this topsy-turvy movie DuBois is the hero.

So we have a movie that is a mirror-image of the classic hero’s journey. It’s well done. We even have a transformation, albeit in the wrong direction, as Lugo is transformed from a loser who is simply motivated by greed into a blood-thirsty monster. I give the villain a rating of 4 out of 5. The movie itself is Rock solid (pardon the pun). As viewers we can’t help but be fascinated, and disgusted, by the knowledge that it is a true story. Like you, Greg, I’d dismiss this film if it were fiction, but its factual basis makes it disturbingly unforgettable. I agree that Pain & Gain earns 3 Reels out of 5.