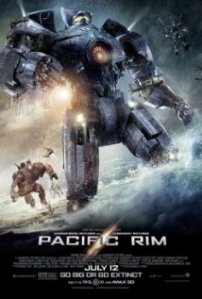 Greg, after watching Pacific Rim, it’s hard to believe that the word ‘pacific’ comes from the Latin word meaning ‘peace-making’.

I was expecting another Transformers knock-off. But this was much, much more.

The movie begins with the city of San Francisco being decimated by a huge dinosaur-like monster that emerges from the depths of the Pacific Ocean. Soon other monsters are attacking other populated coastal cities around the world. Apparently, the beasts, called Kaijus, come from a portal that connects to another universe. To combat these creatures, human beings create equally huge mechanical robots, called Jaegers, which are operated by pairs of humans in mental synchronicity with each other. For a while, the Jaegers hold their own against the Kaijus, but soon the Kaijus adapt and grow bigger and smarter, creating a shortage of both Jaegers and pilots capable of operating them. Our hero, Raleigh Becket (Charlie Hunnam), is asked to come out of retirement to fight the beasts one more time.

He returns to an underground bunker where his old leader, Stacker Pentecost (Idris Elba) commands all that is left of the once numerous Jaeger fleet: just four Jaegers left. Pentecost’s gal Friday is Mako Mori (Rinko Kikuchi) who wants to be a Jaeger pilot. Two bickering scientists (Charlie Day and Burn Gorman) are studying the Kaiju. The other Jaeger pilots are unsure of Becket as he is a known loose canon. The plan is to take a black-market Russian nuclear warhead and detonate it inside the portal, closing it forever.

Greg, Pacific Rim surprised me. I wasn’t expecting to enjoy a movie that features monsters the size of the new World Trade Center fighting robots of equal size. But it was a remarkable visual spectacle. This is one of those movies that viewers must enjoy on the Big Screen. Yes, size matters. The CGI effects are simply astounding and if you wait to see this film on Netflix, you’re cheating yourself out of a unique sensory experience.

But the vast visuals are not the main reason I enjoyed this film. Yes, the staggering size of the Kaijus and Jaegers was breathtaking to behold, but the film’s appeal derives mostly from a solid screenplay and many strong characters. We care about the humans who populate this film, and their story outshines the robots and the monsters. And we have a true hero’s adventure with many entertaining peaks and valleys. I was impressed.

Scott, I grew up in the 70s and 80s on such TV shows as Ultraman, Voltron: Defender of the Universe, and Battle of the Planets (and later series like The Power Rangers). In each of these shows, a giant monster comes from out of nowhere to wreak havoc on planet Earth. Then, a group of humans band together to form a giant robot to destroy the monster – usually in 30 minutes or less. These shows (and movies such as Godzilla) are known in Japan as Tokusatsu or “special filming” shows. They usually portray superheroes and monsters by men wearing rubber suits. Pacific Rim takes Tokusatsu to an entirely new level.

As I mentioned earlier, I thought this would be just another Transformers knock off. But I was schooled. Pacific Rim did indeed do what the Transformers movies set out to do (create a dazzling robot movie) but it also gave us some classic hero elements as well.

That’s true, and how refreshing it is to see a summer popcorn blockbuster give us meatier fare than usual. Pacific Rim is much more than a mindless visual orgy. There is a fascinating psychological element to the film involving the psychic connection between Jaeger pilots that is necessary for those pilots to defeat the Kaijus. This reminded me of Star Trek’s Vulcan mind-meld involving Spock establishing a connection to another person’s mind – it is emotionally (and even physically) dangerous but the two minds become one, allowing for shared information and physical coordination. It’s very cool how this tool in Pacific Rim assists in the defeat of the villains in not one but two different ways.

Pacific Rim, for better or for worse, borrows heavily from other classic movies. The rivalry between Becket and veteran Jaeger pilot Chuck Hansen (Robert Kazinsky) is very reminiscent of scenes from 1986’s Top Gun. And I’ve already mentioned how much the story matches just about any Godzilla film.

This in not necessarily a bad thing. Becket is the classic hero character. Mako plays a strong heroine role (although there is an embarrassing scene where Becket defends her honor. She’s a kick-ass warrior. She could have defended her own honor.) Kazinsky’s Hansen is cut from the same mold as “Ice Man” – a by the book fighter pilot. Pentecost is the leader-mentor. They all work well in this film which is the real gift of Pacific Rim. There is a real story behind all the special effects.

As anyone who knows me will tell you, I’m quite a nerd and a proud one at that, and so I was thrilled to see that the heroes who save the day behind the scenes are the two scientists, played by Charlie Day and Burn Gorman. The performances of Day and Gorman were simply brilliant, especially that of Day, who blends genius with comic relief. His role is reminiscent of Rick Moranis in Honey I Shrunk the Kids, only he has more depth and more interesting quirkiness than Moranis.

And like you, Greg, I am impressed that the hero story here features a slew of supporting characters who augment the hero’s journey — the mentor, father figure, love-interest, best friend, bitter rival, and other assorted helpers. These characters add a richness and depth to a film that decided it wanted to be much more than a lightweight visual feast.

I really enjoyed seeing the old Tokusatsu shows get a royal treatment in Pacific Rim. I wasn’t expecting much but I got a lot for my $10 ticket. For a great story told with amazing special effects I give Pacific Rim 4 out of 5 Reels. And for decent storytelling and hero-building (but still a bit shallow for my tastes) I award 3 out of 5 Heroes.

Pacific Rim is a film that won me over with its eye-popping visuals, memorable characters, and appealing story that maintained my interest from start to finish. It ranks with Star Trek Into Darkness and Iron Man 3 as the best summer blockbuster this year. I also award it 4 Reels out of 5. And as much as it pains me to say this, I agree with you that the hero story was solid but a tad thin, and for that I give the film 3 Heroes out of 5, too.