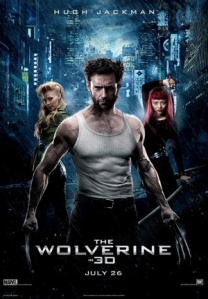 Time to review another movie, Greg. This time it’s The Wolverine, starring Hugh Jackman, who is more ripped than my spoon-sized shredded wheat.

In the trailers, Yashida offers to make Logan “mor-tal” but I think he’s tall enough.

The Wolverine begins with a flashback to Nagasaki during World War II, when the city is about to be hit by the A-bomb.  At that time Logan saves Yashida (Hal Yamanouchi) from being burned by the radiation.  But now Yashida is dying of old age and sends his granddaughter’s friend, Yukio (Rila Fukushima), to bring Logan back to Japan, presumably to say thanks and farewell.  On his deathbed, Yashida tells Logan that he wants Logan’s superpower of immortality, but Logan refuses to hand it over.  Just before Yashida dies, his doctor, Viper (Svetlana Khodchenkova), injects Logan with a parasite that disables his instant-healing powers.

Yashida, a rich technologist, has left his vast fortune to his granddaughter, Mariko (Tao Okamoto) which makes her the target of assassins. Logan comes to her aid and not only saves her from the villains, but befriends her as well. Logan is now on a mission to protect Mariko until the will-reading which bestows all power of the Yashida company upon her.

Greg, I found The Wolverine to be a fairly good film that is only notch below its predecessor, 2009’s X-Men Origins: Wolverine, in quality.  Once again, Hugh Jackman strikes all the right notes in his performance as Wolverine.  No one looks more intimidating with and without those talons that spring from his knuckles.  And let’s face it — those massive creases in his furrowed brow are deeper than the grand canyon.  Jackman’s intensity is palpable.

For me, the movie succeeds in showcasing several of the strongest female characters we’ve seen in a movie this year.  The characters of Yukio, Mariko, and Viper are all outstanding.  Viper, in particular, is a powerful character and a terrifically effective villain.  The Wolverine also features one of the best action scenes I’ve witnessed this year — a fight on top of a high-speed train traveling at 300 miles per hour.  It literally had me on the edge of my seat.

I thought the film started out really well. We were in Nagasaki, Japan during World War II where Logan is found in a “hot box” as a Japanese prisoner of war. When the air raid sirens go off, Yashida lets all the prisoners out of their barracks so they’d have a fighting chance. His peers commit suicide before the bomb falls. Yashida then attempts to let Logan out of his lead-lined pit, but Logan convinces the man to take shelter with him. The nuclear bomb explodes and it is Logan who shields Yashida from the blast. Logan’s powers of regeneration allow him to take the full force of the blast and survive. Yashida is forever in his debt.

This opening is exciting and sets up the rest of the story. It exemplifies Logan’s powers and establishes the two men’s connection. We get another scene of action when Logan saves Mariko from the assassins. The train battle you mentioned is thrilling and even has moments of humor. Watching Logan battle it out on top of a speeding bullet train was exciting. But that was about the end of the thrills for the next hour. And that’s where The Wolverine lost me.

The Wolverine pretty much kept my attention, Greg.  When he loses his powers, it’s akin to Superman being exposed to Kryptonite.  As the audience, we know that the hero must regain his lost powers to defeat the villain.  Not knowing how Logan was going to do this was enough to maintain my interest.  Then, when Wolverine recoups his superpowers, he encounters a force that threatens them again, and in a surprising way, too.

Having said all this, the film is not without its problems.  For one thing, some of the fight scenes, to me, were poorly filmed.  The camera was shaking so much it left me wondering what the camera operators were smoking that day.  Also, the ending of the movie was somewhat anti-climactic and fell a bit flat for me.  And in terms of the hero journey, Logan lacked encounters with a mentor and a father figure, which are two important elements of the path that heroes take.

Scott, the time between the train action and the final scenes where Logan fights a giant Adamantium robot was easily an hour long. Virtually nothing happens in that 60 minutes. There are flashbacks, and love scenes, and walking along the shore. But nothing of interest. All the time Logan spends as a weakling he is in hiding. There is no drama at all. I really felt like the director was padding out half the movie.

The plot made no sense at all. If Mariko didn’t want the company – all she had to do was turn it over to her father. There was an army of ninjas who appear from nowhere. There’s an old flame who is an expert with a bow (there was a lot of archery in this film). The villain Venom seemed to have variable potency with her poison. And the climax of the film (aside from the thrilling battle) made no logical sense at all. I really felt like the movie died after the first act and never recovered.

Sorry you didn’t like The Wolverine more, Greg.  Overall, I found it to be a worthy addition to the X-Men canon.  Logan is an effective hero character because he longs for peace of mind and for a chance to lead a normal life.  Yet he knows that he is a soldier who is called to right the world’s wrongs.   The tension between these two incompatible goals makes for an effective hero story.  The Wolverine isn’t a great film but it left me satisfied and entertained.  I give the movie 3 Reels out of 5, and 3 Heroes out of 5, too.

I felt The Wolverine didn’t measure up to 2009’s X Men Origins: Wolverine. Hugh Jackman gave it his best and is convincing in the role. But the writing was terrible. There wasn’t much of a hero’s journey here. Logan starts out in one place and ends up in the same place. He hasn’t grown or changed a bit. I felt like I didn’t get my money’s worth as this was only half a movie. I give The Wolverine 2 Reels and 2 Heroes.

And I’ll never look at a fork the same way again.