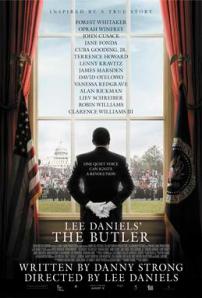 Greg, there’s no mystery here.  The Butler did it.

All kidding aside, this looks like an Oscar contender – and so early in the season, too.

The Butler begins by introducing us to a young African-American boy named Cecil Gaines who, along with his family, is working on a cotton farm in the south in 1926.  The boy witnesses his mother being raped and his father being murdered by the White land-owner.  The murderer’s grandmother adopts Cecil and trains him to be a butler.  Later, as a teenager, Cecil leaves the farm and ventures into the city where he is hungry and homeless.  He is caught breaking into a store to steal food, and the kind servant who caught him decides to hire him.  This is the break Cecil needs to kick-start his adventure.

At home, Cecil is married to a dutiful wife Gloria (Oprah Winfrey) and has two strapping young boys. The elder, Louis (David Oyelowo) studies hard but looks down on his father’s occupation thinking he is an Uncle Tom. This is the beginning of a struggle between the two men as the butler has to work and live within the white structure and the son fights against Jim Crowe laws as he attends college in the South of the 1960s.

Greg, this is an impressive movie.  I thought the filmmakers did a stellar job of chronicling the lifespan of a man who not only lived through radical changes in American society, but also witnessed the U.S. government machinery that either helped or hindered the transformation.  Forest Whitaker deserves great kudos for a highly moving performance.  You can see both pain and his dignity in his every word and facial expression.  I can easily envision Whitaker being nominated for Best Actor here.

This is an epic story spanning 80 years and 11 presidencies. That’s no mean feat. Director Lee Daniels pulls double duty here as he shows not only the life of a black man who grew up in the South and learns to live in the white man’s world, but also parallels that story with Cecil’s son Louis who wants to change the unfair system of “separate but equal” and raise blacks to full equality. The two men clash as we watch Louis go through the phases of the Civil Rights struggle from non-violent sit-ins to the militant Black Panther party. It was not an easy task and Daniels nearly pulled it off.

I was fascinated by the trajectory of the father-son relationship.  There is a close bond to start, but their relations are strained when Louis adopts a more militant strategy in dealing with civil rights than does his father, who prefers to set an example quietly.  It was very rewarding to see how the two men’s positions converge.  Louis softens while his father gets tougher.  This duel transformation was portrayed powerfully and realistically.  Cecil finds his voice and re-connects with his son, and in this way we have a hero journey that thoroughly satisfies its audience.

If I have a criticism of The Butler it is that it was too light on the history. While many of the major events of the Civil Rights movement were depicted, they weren’t clearly explained. A case in point is the Freedom Riders. We’re told that Louis is a Freedom Rider but we aren’t told what that means. For younger viewers (and those of us who aren’t overly schooled in history) a line or two of dialog about the significance of that event would have been valuable.

Still, following two heroes on their separate tracks through the same period in time was a powerful device. First growing up with Cecil from the plantation to his role on the White House staff and then having him collide with the next generation of black men with a completely different way of thinking made for a sharp contrast that kept me entertained while I was also educated.

As long as we’re picking nits, I had a problem with some of the casting choices.  As I said, Forest Whitaker hits a grand slam home run with his performance, and David Oyelowo and David Banner, cast as his two sons, deliver the goods as well.  But they dropped the ball completely in their casting of the Presidents.  Robin Williams did not work at all as Dwight Eisenhower.  And Liev Schreiber, John Cusack, and Alan Rickman were poor choices for Lyndon Johnson, Richard Nixon, and Ronald Reagan, respectively.

Rather than using these Hollywood elite, who were no doubt thrilled to be part of this project, it would have been wiser to cast more obscure actors who better resemble these presidents.  Casting Oprah as Cecil’s wife was also a curious choice.  She did a fine job in that role, but Oprah is so larger-than-life that it’s difficult to see her as anyone but Oprah.

I noticed that too – as well as the irony of liberal left-wing “Hanoi Jane” Fonda cast as Nancy Reagan. That was just funny.

I was very pleased that this film did not fall into the typical plot solution that other similar films have fallen into. In last May’s “42,” last year’s “The Help” and 2010’s “The Blind Side” black heroes are aided by benificent white altruists. But in The Butler we see black men raising themselves up by virtue of their own strength and courage.

For a good bit of epic storytelling that covers a lot of ground, despite missing some important historical detail, I give The Butler 5 out of 5 Reels. And for a surprise dual-hero story with both heroes finding common ground I award The Butler 5 Heroes.

The Butler is a must-see movie that vividly portrays the heroic life of a butler who is both witness to, and a participant in, the Civil Rights movement in America.  There’s no doubt that this film will be nominated for Best Picture, and there’s a high likelihood of nominations for Best Director and Screenplay as well.  For me, The Butler fell just short of reaching the rarified air of 5 Reels, but it does earn a quite impressive 4 Reels out of 5.

The hero journey is compelling in its complexity.  We see a father-son relationship that evolves and results in a satisfying departure from the usual ‘atonement with the father’.  What actually transpires is an ‘atonement with the son’, which becomes a central part of Cecil’s transformation.  Our hero Cecil grows as an individual in ways that fascinate us, and we cannot help but admire his courage, intelligence, resilience, and honor as a man.  I happily award this film a full 5 Heroes out of 5.