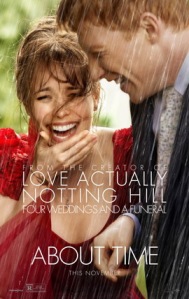 Greg, it’s about time we reviewed About Time.

And there’s no time like the present! Let’s recap.

We meet our hero, an Englishman named Tim (Domhnall Gleeson), who appears to be an ordinary, awkward 21-year-old until one day his father (Bill Nighy) tells him the big family secret: All the men in the family have the ability to go back in time. Tim decides to use this power to acquire the one thing that has always eluded him, namely, a girlfriend. He meets a wonderful American girl named Mary (Rachel McAdams), and after several time-travel trips (needed to erase his mistakes) he is able to win her heart.

Scott, this is a nice, warm love story in the same category as “Notting Hill” or “Love, Actually” (all by the same writer / director Richard Curtis). Tim meets Mary at a dinner party and successfully gets her number.  But then he decides to travel back in time to fix a play by his father’s playwright-friend Harry. When he does, he alters the events that lead up to meeting Mary. He then has to wait for Mary at a Kate Moss exhibit and when he does, he learns that she has a new boyfriend. So, he goes back in time and intercepts Mary before she meets the opposition. He then tries and tries again, working on his approach until he perfects it. She falls for him a second time.

I agree that About Time is the sweetest, most endearing love story of the year. It reminds me of a 2006 Sandra Bullock film called The Lake House in that it is a romantic tale that incorporates elements of time travel. About Time is a stronger movie than The Lake House largely due to the remarkable performance of Domhnall Gleeson, who plays the role of a sweet, humble, love-starved man to perfection.

We have a terrific ensemble performance here, with individually great actors forming a whole that exceeds its parts. Bill Nighy strikes just the right notes as the loveable, playful dad. Tim’s sister Lydia (Lydia Wilson) is wacky, dysfunctional, but equally loveable. We even want to give the demented uncle (Richard Cordery) a big bear hug. And of course Rachel McAdams steals our hearts with her warm portrayal of a woman who is one of the few souls worthy of Tim’s big heart. This movie exudes charm from start to finish.

I thought About Time reminded me of Groundhog Day – one of your favorite movies, Scott. In it Bill Murray trips through time repeating the day over and over again trying to win the heart of the beautiful Andie McDowell.

About Time is a wonderful hero’s journey. Tim starts out as an ordinary young man who wants to win the heart of a young lady. He’s given a special power from his mentor-dad. He then spends the summer trying to make it with a pretty girl, only to learn that even with time travel you cannot force someone to love you. Then he gets a new goal – to win the love of Mary. Things are going pretty well as he builds a relationship with his new love when something happens that turns his life upside down. He must then regroup and come up with a plan for making things right. He learns a life lesson that we can all take home. It’s a complete mythological story in a modern setting.

If I had to pick some nits, the rules of the time-travel superpower seem like rather arbitrary plot devices meant to manipulate our emotions. Also, About Time offers a confused message about how to live one’s life. As we’ve mentioned, there are scenes where Tim keeps repeating a day until he is able to produce just the right events to make a relationship with his future wife possible. The lesson appears to be that we should make strong efforts to impose our will on a situation rather than allow the events in our lives to unfold naturally.

Yet there’s another scene that suggests the opposite lesson. In this scene, natural circumstances lead Tim to encounter a woman named Charlotte whom he is trying to avoid. Even his time travel powers cannot prevent this encounter, although he tries using them anyway. It’s clear that Tim’s character needs to be tested by this encounter, and he passes the test, allowing him to transform as a character. This scene suggests that we should accept things that are either meant to happen or meant not to happen.

I think that time travel is a superpower that everyone wants because we all feel regret. How often have you gone home after a party and wished you had said something slightly more clever to your boss – or some other person you wanted to impress? Time travel gives our hero (and therefore ourselves) the ability to go back and try it again (and again) until we get it right.

And our hero Tim is a true virtuous hero as he doesn’t try to gain fame or fortune for himself. He just wants to win the heart of a pretty girl. And remember, the writer establishes early in the film that try as you might, even time travel cannot make someone love you. They have to have it in them to begin with. And so Tim is really just getting what is rightfully his.

I thoroughly enjoyed About Time from start to finish. The movie offers up a truly moving love story, not just between a man and a woman, but between a man and his father as well. There aren’t many movies that leave me near tears at the end, but About Time left me with a lump in my throat the size of Tim’s enormous heart. This film is the best love story in the movies in the past five years. I happily give About Time 4 Reels out of 5.

As you’ve noted, Greg, we have a wonderful hero transformation here, as Tim learns that you don’t have to repeat a day to improve upon it — you can simply allow it to unfold with all its flawed beauty permanently etched in time and with no need to change a thing. There is great mentoring, a stirring love, more than one great test of the hero’s character, and a gift to be given to future generations of Tim’s family. For this reason I award Tim 5 Heroes out of 5.

I agree with you Scott. Like other movies by the same writer, About Time is a touching love story with a message we can all take home. I had the luck to see it twice and it got better the second time around. I give About Time 4 out of 5 Reels and 5 out of 5 Heroes for Tim.