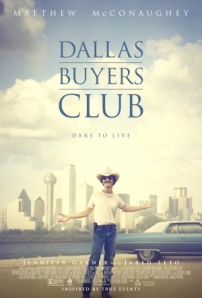 Greg, we just traveled back in time to Texas during the beginning of the AIDS epidemic in the 1980s.

And boy are my arms tired. Let’s recap.

It’s 1985 and Ron Woodroof (Matthew McConaughey) is not in the best of health. He’s shown to be a young cowboy who lives life in the fast lane. We see him immersed in hard-drinking, gambling, and seemingly endless sexual encounters with many different women. One day, after a fairly minor encounter with the law, Woodroof collapses and is sent to the hospital.

He learns that he has full-blown AIDS and has 30 days to live. Flabbergasted, he researches his condition at the library and learns that a new drug – AZT – is in trials at his local hospital. Unable to get into the trials, he bribes an orderly to sell him AZT. When the drug doesn’t work for him, he goes on a bender and wakes up in a Mexico clinic where an American doctor (who had his licence revoked) treats him for his AIDS symptoms and tells him the AZT was killing him as fast as the AIDS.

Woodroof is amazed at his recovery and packs his car with enough supplies to treat 300 people. But he has a hard time selling to the gay community because he’s homophobic. He enlists the aid of a drag queen and his business takes off…

Greg, I hereby declare 2013 the year of the real life biopic in the movies. We’ve seen many films this year that are based on, or inspired by, real life events — Captain Phillips, Philomena, The Book Thief, 12 Years a Slave, Saving Mr. Banks, among others. As with all these other true-to-life biopics, Dallas Buyers Club is a high quality story.

Our hero Woodroof starts out an unlikeable jerk, a sexist, intolerant, drug-abusing, homophobic pig. His character shows slow, gradual growth in this movie. At first he’s just looking to stay alive. Then he’s motivated by greed when he sees a profit to be made in importing unapproved medications into the U.S.  Slowly but surely, as he sees people suffering in droves, his motives shift toward being more altruistic. It’s an interesting transformation to watch.

It’s an engrossing hero’s journey. And as with most hero’s journeys, we need a villain. The villain in this story is the Food and Drug Administration. But the FDA is too nebulous an organization so the local doctor becomes the embodiment of the misdirected search for an HIV cure. They’re focused on AZT which is toxic to the human body in large doses. The trials don’t look good but the doctor keeps on with the program because AZT is the only treatment that is approved by the FDA.

What puts Woodroof in opposition with this doctor and the FDA is his untested and unapproved “supplements.” The FDA wants to protect the public from snake oil salesmen (and boy does Woodroof visibly fit that bill), but turns a blind eye toward research that is going on in other parts of the world. This then creates the tension between Woodroof and his villain.

And to contrast the good with the bad, Woodroof befriends a female doctor who is involved in the AZT trial – Dr. Eve Saks (Jennifer Garner). She is at first opposed to Woodroof’s approach. But as the story builds, she begins to see that the FDA and her boss are moving too slowly and dogmatically to address the needs of their patients.

You’re right, Greg. Woodroof’s courageous journey is only made possible by the resistance he encounters by a healthcare bureaucracy that seems designed to thwart progress in combatting AIDS. It was a wise choice to show that the medical establishment was not entirely against Woodroof. His relationship with Dr. Saks and her growing appreciation for Woodroof’s buyers club is an important part of the story.

It is interesting to see how Woodroof’s homophobia and intolerance wanes. His growing fondness and respect for Rayon (Jared Leto) is fascinating and rewarding to watch. When Ryon dies, he is outraged and no longer tolerates homophobic behavior from others. His transformation for elitism to egalitarianism is exactly the kind of evolution in character that we want to see in any good hero story.

McConaughey’s performance is indeed stellar. His physical transformation as an actor was as dramatic as his character’s transformation as a hero. I enjoyed Dallas Buyers Club but rate it a notch below your rating, Greg. I give it 4 out of 5 Reels. The hero transformation was dramatic and contained many elements of the classic hero journey. Woodroof enters a special world and encounters a mentor and several allies and villains. In the end, in order to triumph, he must overcome his own inner demons along with a resistant medical community. For these reasons, I agree he earns 5 out of 5 Heroes.