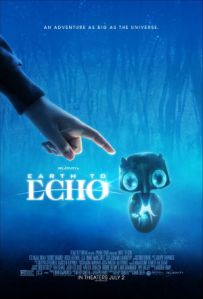 Greg, it’s hard to believe that it’s taken 35 years for Hollywood to attempt to re-capture the magic of E.T. the Extra-Terrestrial.

We meet three 13-year-old kids from in Nevada who live on a street that’s about to be demolished to make room for a new superhighway. The kids are Tuck (Astro), Alex (Teo Halm), and Munch (Reese Hartwig). They have a crush on a girl in school, Emma (Ella Wahlestedt), who seems out of their league. One day their cell phones begin displaying a strange, amoeba-like image. They somehow discover that the image is actually a map of a remote part of the Nevada landscape 20 miles away.

When they arrive (by bicycle) they find an object that contains a living (?) mechanical alien they dub “Echo.” Echo is trying to collect all the pieces to his spacecraft and sends a sequence of maps to the boys’ cell phones. Each map leads to another missing piece. Meanwhile, it turns out that there are some evil government types who are chasing after Echo too. Will the boys find all the pieces in time to save Echo and send him home? Or will the evil adults find him first and do mean nasty experiments on him?

Greg, as your opening line in this review suggests, Earth to Echo in no way approaches the quality or playful spirit of E.T. the Extra-Terrestrial. I don’t mean to imply that Earth to Echo is a failure. If the goal was to create a pleasant diversion for kids that isn’t terribly offensive for adults to sit through, then this movie is a success. Personally, I wasn’t bored but I wasn’t dazzled or entertained to any great degree, either.

The quality of a predictable movie like this one truly depends on the casting of the main actors. Unfortunately, the ensemble of child actors is a rather forgettable lot, despite an obvious attempt to manufacture a Breakfast Club-like grouping. There’s a nerd, a misfit, a bad-boy, and a cute girl, and together they exude little chemistry or flair. A few months from now I’m far more likely to remember their smartphones than their personalities.

Harsher words were never more true, Scott. Echo is a painfully slow quest for missing pieces. The characters just go from place to place and don’t have much of an adventure. There is a nice little lesson – you can be friends despite the distance – but it is mostly just tossed in at the end. It tries a bit too little to be a Stand by Me for millennials with its coming of age theme. I think 2011’s Super 8 is a better film with the same themes. Surely, the shaky-cam first-person effect are reminiscent of such films as The Blair Witch Project and Cloverfield.

As a hero story, it looks like we have a nice ensemble / fraternity cast with the addition of a tomboy thrown in for diversity. The foursome are on a quest and each has their own quirks but nobody seems to overcome any missing inner qualities. As such, the heroes fall flat and leave us wanting more substance.

And speaking of flat substances, our group of heroes encounter an odd, dirty-looking piece of equipment in the desert, and it turns out to be an alien creature in disguise. The kids name him Echo and I suppose we’re supposed to think he’s cute in the same way we fall for E.T. in E.T. the Extra-Terrestrial. But I felt no such emotional connection to Echo. He’s sort of a mechanical Tweety Bird who lacks any of Tweety Bird’s adorable qualities. Echo possesses the power to move inanimate objects when doing so advances the storyline but not when it doesn’t.

The villains in the story are the humans who want to capture Echo, and they are disappointingly unidimensional and uninteresting. The one human who interacts with the kids is a government official posing as a construction worker. The man has all the charm of Atilla the Hun and exists solely as a hateful figure who wants to do harm to Echo. I guess it’s decided that that’s all we need to know about him. Very disappointing.

It’s true. The villain in this story was none other than Jason Gray-Stanford who played Detective Randy Disher on the TV show Monk. He’s a pretty non-threatening-looking guy. His only purpose is to represent all adult people in the universe as being both unfeeling and, well, stupid.

This is pretty much a movie for the younger crowd, Scott and so there aren’t many tense moments. It’s pretty safe for your 5-10 year olds who look up to 13-year olds. However older kids will see through the saccharine and find it silly. I can only give Earth to Echo 2 out of 5 Reels.

The heroes in the story don’t offer us much, but I did like the way they reminded me of the Goonies. They get just 2 out of 5 Heroes.

And the villains were nearly non-existent. Just one adult chasing after Echo and the kids and he was pretty mild fare. I give him just 1 Villain out of 5.

Greg, you’ve aptly summed it up. I considered giving this film a single insulting Reel out of 5 but as we’ve already mentioned, Earth to Echo caters to a young crowd and probably delivers to them exactly what they’re looking for. The movie is flimsy in just about every way that’s important to us, but we’re adults and certainly not the target audience. Two out of 5 Reels is about right.

The heroes are a forgettable collection of kids who are predictable and uninspiring. Even Echo himself does his home planet a disservice by lacking sophistication and charm. These heroes do go on a journey and are not totally lacking in redeeming qualities, and so they manage to eek out a rating of 2 Heroes out of 5.

The villains are about as awful as villains can get in a movie, and by “awful” I don’t mean that they are evil or dastardly or the kind of villain that we love to hate. I mean that they are just poorly constructed and an insult even to the intelligence of a 5-year-old kid. I was so thoroughly disgusted by the villains here that I give them a big fat zero rating. That’s right, zero out of five for me, Greg.