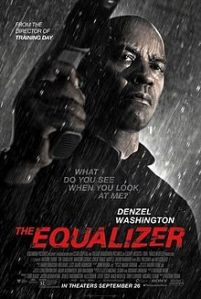 Greg, after seeing The Equalizer, I want to stay on Denzel Washington’s good side.

I thought he was going to balance my stereo system. I was wrong. Let’s recap…

We meet Robert McCall (Denzel Washington), a retired special forces agent who works at a large Home-Mart hardware store in Boston. Robert enjoys helping people, such as his buddy Ralphie (Johnny Skourtis), who aspires to become a security officer at the store, and a young woman named Teri (Chloë Grace Moretz) who sits in the same coffee shop that Robert frequents in the middle of the night. Teri is a prostitute working for the Russian mob, and one night Robert sees Teri’s pimp abuse her.

That’s when Robert decides to equalize the odds. He strides into the office of the head mob bad guy and lays down $9800 to buy Teri’s freedom. The head guy not only refuses Robert’s offer, but tells him he can have Teri only after he’s “used her up.” That’s when Robert locks the door behind him, starts his stopwatch, and begins to lay some serious hurt on the bad guys.

Greg, The Equalizer is one of Denzel Washington’s best movies in recent years. It’s far from being a perfect film, but it does feature a powerful hero archetype. The archetype is that of a gentle older man who appears harmless but turns into an unstoppable killing machine when provoked. Notable examples of this archetype include Mr. Myagi in The Karate Kid and Bruce Willis’ Frank Moses character in Red.

As an audience, we apparently love highly moral heroes who have supremely powerful abilities and who have the wisdom to hide those abilities from just about everyone — except very, very bad men who deserve to get their butts kicked. Denzel plays this role to the hilt. We can’t help but love the man who looks out for others and who only uses his immense talents when someone he cares about is in grave danger.

Denzel does this well. We like McCall because he is altruistic: he gives his time and experience to younger people to help them better themselves. As such, he plays a mentor role as well as the hero. McCall also has a deep inner pain as a man who lost his only true love – his wife. He made a promise to her not to indulge in his super-spy ways. But when evil is done to an innocent, as McCall would say, he makes an exception.

We also like McCall because he has a few social tics that make him relatable. He’s focused on finishing the 100 books his wife started reading but died before she could complete them. Also, he is a bit obsessive compulsive: timing his every activity, laying out his dinnerware just so, and at the mob’s office, aligning a row of glass skull ornaments on the bad guy’s desk. These quirks make our super hero more human, more sympathetic.

And since we’re talking about the villains, the mob guys are typical bad guys. Tattooed, rotten teeth, wife-beater-wearing thugs. But when word of McCall’s dispatching of the thugs reaches the head Russian mobster (Pushkin), he sends a more interesting villain. He sends Teddy – and we don’t mean Teddy Bear.

The Equalizer gives us a villain whose level of evil matches the level of good in our hero. Teddy (Marton Csokas) is a true sociopath who ruthlessly hunts down our hero Robert McCall. Teddy is handsome, smart, charming, and relentless. We can’t help but admire his tenacity and brutal efficiency. Greg, this movie needed a villain we could revile and it delivered.

Once again, we have an evil mastermind (Pushkin) who lurks behind the scenes and sends his henchmen to do his dirty work. This hierarchical structure to villains appears to be common in the movies. I do have a few criticisms of the choices made by director Antoine Fuqua, including the degree of senseless violence shown by Teddy toward his victims. We don’t need to see as many blood-splattering blows to the face as this film shows. Decades ago, Alfred Hitchcock showed us that when it comes to violence, less is more.

Scott, Teddy is the villain we’ve been looking for all year. His demeanor is calm and collected in presentation. But when he wants to send a message, he is savage. And the bigger the message, demeanor he gets. We’re also given a backstory to this villain. McCall has done his research and learns that Teddy was a troubled child taken in by a virtuous man. But the young Teddy couldn’t fathom the generosity he was shown. So, rather than accept his new reality, he killed his benefactor before he could disappoint him. That’s a really cold story.

Overall, I liked this movie but found it pretty uncomplicated. And in places, it was completely impossible to believe (McCall apparently has the faculties to destroy an entire oil tanker). I was entertained from beginning to end, but there were no surprises. I give The Equalizer just 3 out of 5 Reels.

McCall is a great hero and I suspect we’ll be seeing more of him (there is a planned sequel). He embodies all the great elements of the hero including altruism, intelligence, and mastery. And, in an interesting turn, he never fires a weapon. However, he lacks a transformation that would give him a nice story arc. Still, he is a catalyst for change in the people he helps. I give McCall 4 out of 5 Heroes.

The majority of the bad guys in this film are typical stereotypes: Russian mafia hit men and cops gone bad. But Teddy really saves this story from being a run-of-the-mill action flick. He is everything his heroic counterpart is, but lacks any empathy. This makes him a villain worth fighting against. I give Teddy 4 out of 5 Villains.

Greg, I like The Equalizer a bit more than you did. Perhaps it’s my admiration for Denzel Washington, who wields his talents here in impressive fashion. Perhaps it’s the type of hero he portrays, the older gentleman whose hands are lethal weapons, whose wits are unmatched, and whose morals are in all the right places. The Equalizer is a very good film well worth seeing if you enjoy a classic battle between good and evil. Director Antoine Fuqua makes some poor decisions here and there, but overall this movie provides great entertainment. I happily give this film 4 out of 5 Reels.

The character of Robert McCall is one of my favorite hero types and most certainly is thrown into a different world where he must triumph over a formidable villain. But it’s not the strongest hero story for a few reasons. While Robert must kill the bad guys to accomplish his mission, does he really need to use corkscrews and power drills? Like Teddy the villain, Robert’s level of violence seems a bit over-the-top. Second, there is no classic hero transformation here. Robert is a benevolent bad-ass when the movie starts and he remains one by the movie’s conclusion. As much as I love Denzel, I can only give a hero rating of 3 out of 5 here.

I agree with you, Greg, that Teddy is a terrific villain. The scene you mention in which Robert converses with Teddy in the restaurant is a fabulous piece of work; the scene is tense, taught, and meaningful for our understanding of what’s going on with these two powerful characters. All the bad guys and henchmen were fun to watch and had my full attention at all times. There is a fascinating backstory to Teddy that helps us understand his horrific disregard for human life. Like you, Greg, I give Teddy and his associates a meritorious 4 out of 5 Villains.