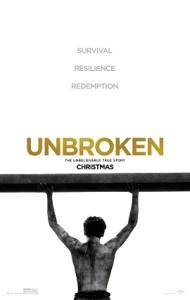 Indeed. Let’s take a look at this film adaptation of the best-selling novel by Laura Hillenbrand.

It’s World War II and young Louis Zamperini (Jack O’Connell) is the bombardier of a B-24. He hits his target, but his ship is damaged and barely makes it’s way back to base. This reminds him of his childhood growing up in the Bronx. He was constantly picked on by the other boys because of his Italian heritage. He was always getting into fights and engaging in underage drinking. His brother takes notice and sets him straight. It’s his brother who teaches him “if you can take it, you can make it.” This is a lesson he’ll use all through life.

While on a mission in the South Pacific theater, Zamperini’s plane crashes into the ocean. He and two other men, Phil (Domhnall Gleeson) and Mac (Finn Wittrock), survive and remain afloat in a raft for many weeks, barely surviving. Mac dies, but Louis and Phil are captured by the Japanese military who torture and imprison them on a small island. Louis is eventually transferred to a POW camp near Tokyo, where he is brutalized by one particular camp officer nicknamed ‘The Bird’ (Takamasa Ishihara).

Unbroken is a longish look at the survival of a man through the trials of torture and abuse in World War II. I thought in many ways it was a technically fine film, but I don’t expect it to win any awards. One thought that kept going through my mind while watching Zamperini live through his lost-at-sea adventure, then his torture, and then his POW experiences was – how was his experience any different than any other POW’s? What made him the subject of a book and movie where he was called “Unbroken?” Weren’t all POWs in some way unbroken?

Unbroken is an inspiring and heart-wrenching look at an extraordinary tale of survival. Director Angelina Jolie does a commendable job of capturing (most of) Zamperini’s heroic journey while also remaining true to Hillenbrand’s book. Zamperini was not the only survivor of the Japanese POW camps but his story is unique and powerful in three ways: (1) his celebrity status as an Olympic track star; (2) his ordeal on the raft for 47 days prior to imprisonment; and (3) his unfortunate experience with ‘The Bird’, who singled out Zamperini for especially brutal treatment.

The performances here are all first-rate, although none are exemplary. This story lacks greatness because Jolie omitted what is arguably the most important part of Zamperini’s ordeal: His shattered post-war psyche. Hillenbrand’s book tells us that Louis suffered from severe PTSD that left him, well, broken. The darkest part of Zamperini’s life wasn’t in the POW camps; it was the alcoholic depression of his post-war life. For Unbroken to reach it’s full storytelling power, we need to see this nadir and how Louis overcomes it. It’s unfortunate that we were deprived of this resolution because we know that redemption is arguably the most central part of any hero story.

I agree with you that the story needed something more to earn the title Unbroken. And if the redemption portion of the story that you mention had been told, I might have been more interested. The scenes with Zamperini and friends in the life raft seemed to go on forever. Likewise, his tours in the different encampments seemed to drag on without storytelling purpose. If the intent was to give us all a sense of the pain Zamperini endured, then Jolie succeeded. I was bored several times during the movie.

The main villain in this story is “The Bird” – a Japanese sergeant who ran the camps. We get the sense that he was an underachiever. It seems his parents were aristocrats and that “The Bird” did not live up the their, or the Japanese army’s expectations. This made him perhaps more cruel to the prisoners. And even more cruel to Zamperini who was famous as an Olympic athlete. “The Bird” was indeed a sadist and spared no opportunity to make Zamperini miserable.

I agree, Greg, that Jolie gives us an extraordinary survival story without the all-important hero transformation that any good hero story needs to achieve maximum impact. In some ways, the film is similar to two 2013 films, Gravity and 12 Years As A Slave, which both described remarkable survival tales but also omitted the aftermath of the survival. The aftermath is essential in showcasing the hero’s changed state, which ultimately transforms us all.

You’re right, Greg, that Japan is the institutional villain of the story, and “The Bird” is the face of Japan in the movie. We grow to despise The Bird as he senselessly beats Zamperini to a pulp again and again. He is pure evil and has no redeeming qualities other than a pretty face whose boyish qualities belie the sadism taking place.

Angelina Jolie shows she has directorial chops in her adaptation of Unbroken. While I thought it was long at 140 minutes and did drag in places, I was glad that I had seen the film. Unbroken reminds us of the sacrifices and commitment of the Greatest Generation to overcome evil. This is a fine addition to a spate of WWII movies this year (including Fury and The Imitation Game). I give Unbroken 3 out of 5 Reels.

Zamperini as the hero of the story undergoes an early transformation from a fractious child to a determined adult. Through the mentorship of his older brother, he grows into a man who can withstand the worst that the world can throw at him. However, this early transformation is not where the story lies. As you point out, Scott, it is overcoming the damage done to him that is the true Unbroken nature of Zamperini. I give this version of him 3 out of 5 Heroes.

“The Bird” is clearly an evil character who shames and humiliates Zamperini and the other POWs. As the face of the institutional villain he was not very well-drawn. I wish there had been more insight into his character, rather than just his vicious acts. I give “The Bird” just 3 out of 5 Villains.

Unbroken is a well-made film that moves us with a harrowing tale of survival, perseverance, resilience, and courage. Angelina Jolie shows us that she can direct movies with the best of them, but she makes a critical error by denying us the redemptive core of Zamperini’s story. I love Zamperini’s tale, despite the movie not quite living up to the lofty heights of the book. For this reason, I’ll award this film 4 Reels out of 5.

The hero story is remarkable in every aspect, although it is unfortunate that Jolie chose not to show us Zamperini’s psychological recovery from the trauma of the war. This film needlessly shortchanges his heroism, and thus I can only award his movie character 3 out of 5 Heroes here.

The institutional villain is capably portrayed by a number of fine Japanese actors, with Takamasa Ishihara delivering an especially standout performance as the deceptively boyish face of evil. We aren’t given much back-story about The Bird, other than a throwaway line or two, and so I can only grant this evil camp officer 3 Villains out of 5.