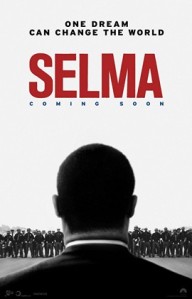 Greg, we just saw another movie about the Civil Rights movement.

Selma was both educational and entertaining. Let’s recap:

Selma opens with Martin Luther King, Jr., (David Oyelowo) receiving the Nobel Peace Prize in 1964. He realizes that a lot work remains to be done in achieving racial equality in America. The most pressing issue for him is to abolish restrictions to Black voting in the South. In the 100 years since the Civil War, White-run communities have erected barriers to Black voter registration. King meets with President Lyndon Johnson (Tom Wilkinson) to ask for help, but Johnson tells him that the war on poverty is his top priority.

Meanwhile, we’re transported to Birmingham, Alabama where the 16th Street Baptist Church is bombed, killing 4 young girls. This is the catalyst that brings Martin Luther King, Jr. to Alabama to begin a movement to change voting laws that prevent Blacks from registering to vote. King understands that voting is the path to true equality because the leaders who look the other way when racist events occur don’t fear being voted out of office.

King meets opposition from the SNCC (Student Nonviolent Coordinating Committee) who has already been working on grassroots measures to increase voting rights. King explains to the SNCC leaders that they need a strategy that is non-violent and forces the White leaders to expose their violent nature, thus providing a news-worthy event that wins uninvolved Whites all over the nation to their cause.

Greg, Selma should be required viewing for all schoolchildren. For that matter, all adults need to see Selma, even those adults who know their Civil Rights Movement history. You and I know from doing years of improvisational work that it is always more powerful to show rather than to tell. It isn’t enough to know that Blacks were once deterred from voting. We need to be shown how, and that’s what Selma does so well. We see the discriminatory practice and its consequences in vivid, horrid detail.

Selma’s greatest strength, in my view, is the way in which it portrays the heroism of Martin Luther King, Jr. We see time and again how King operates at a higher moral plane than everyone else around him. He knows what is right and he knows how to utilize the power of nonviolent demonstration to achieve his noble ends. King is the ultimate mentor figure, and Selma is less of a hero story than it is a story about how a heroic mentor wields his influence. King serves as a mentor figure to his friends in the Civil Rights Movement and also as mentor to President Johnson himself. King himself doesn’t change but he helps others transform to a higher level of moral understanding.

Selma is, indeed, instructive on so many levels. Unlike other movies about Blacks rising up to take their place as equals in society, Selma does not need the benevolent White person to make that change happen. When we look at such movies as The Blind Side, or last year’s 42 (the Jackie Robinson story), we see that Blacks make their advances thanks to the help of a White benefactor. Selma paints the clear picture that King was a true leader and tactical wizard that made the Civil Rights movement work.

Scott, you and I have noted several times over the last couple of years that there are some heroes who don’t transform but who transform those around them. As you pointed out, King is just such a hero. I call him a Catalytic Hero because he is the catalyst for change in his followers and in society as a whole.

One thing we do see in King, vividly, is his awareness of the constant danger he is in. We watch him become fearful of what will happen to him and his followers if they make a misstep. At one point he is on the Edmund Pettus Bridge with hundreds of followers marching behind him. The Alabama State Troopers part their blockade for him and the marchers to pass. He takes to his knees and prays for guidance. He makes the decision not to cross the bridge because he fears another disastrous beating as previously occurred. He is increasingly aware of the risks he is taking and their impending consequences.

You’re right, Greg, that this is one movie about Black progress in society that doesn’t involve a White person precipitating the change. President Johnson is portrayed as the White man who is approached for help and for political reasons is reluctant to offer such help. I’m reminded of that great 2012 film Lincoln in which a President moves the nation slowly toward legal interracial equality. In contrast to Lincoln, which casts President Lincoln in a positive light, Selma is less kind toward Johnson, who is seen as unnecessarily slow and plodding in leading the nation toward equality.

The villains in this story are longstanding institutional barriers such as the Jim Crow laws that took advantage of legal loopholes to ensure racial injustice. The two most prominent faces of racial prejudice in Selma are the Director of the FBI, J. Edgar Hoover (Dylan Baker), and the Governor of Alabama, George Wallace (Tim Roth). President Johnson is also seen as an obstructionist and oppositional character but over time we witness Johnson grow morally and courageously toward Martin Luther King’s view of the world. Like nearly all villainous characters, Hoover and Wallace do not budge from their evil ways.

You’ve covered the villains pretty well here, Scott. We also see that King is facing down his own imperfections. The FBI sends a tape to his wife Coretta Scott King with the sounds of a man and woman in the throes of passion. The voice on the tape threatens to expose King as an adulterer. Coretta confronts King who has to admit his infidelity, but she stays with him. This reminds us that our heroes aren’t always perfect. It also points out that Coretta is a heroic character too, as she is the glue that holds King together.

I would like to point out that this film in no way speeds along in its storytelling. It is thoughtful and deliberate. There are many silences in this film. But they are suspenseful. I never felt that the film was lagging. It is a classic example of how negative space is an integral part of the overall picture. Another thing I want to praise Selma for is its excellent telling of a true-life event. So often biopic films want to tell everything that happens in the hero’s life. Here, we see that the writers focused on one specific event. In telling this one chapter in King’s life we are exposed to a number of King’s abilities: humanity, tactics, leadership, negotiation, not to mention his hopes and dreams and inner turmoil. This is a rich story well told.

Selma is one of the year’s best films. In no other movie have I seen a better demonstration of the mechanics and effectiveness of nonviolent demonstration. It could be an ideal instruction manual for those wanting to emulate King’s (and Gandhi’s) model of bringing about peaceful sociocultural change. The heroic mentorship of Martin Luther King, Jr., is shown in terrific detail here. King was miles ahead of everyone in his moral understanding of the world, and he also had the strength and charisma to move mountains. For it’s depiction of a pivotal moment in U.S. history, this movie earns 5 Reels out of 5.

The hero story is unique in that it’s less about a hero changing than it is about a hero helping everyone around him change. You call him a catalytic hero, Greg, and that term is as fine as any to describe a mentor. Mentors help other people become heroes. King helped Johnson do the right thing, and in fact he helped an entire nation grow up morally and spiritually. King also possessed all eight of The Great Eight attributes of heroes. This powerful heroic mentor story earns 5 Heroes out of 5.

The institutional villainy here is well told, and we are led to despise the faces of racial prejudice and discrimination in the form of George Wallace and J. Edgar Hoover. None of these villainous forces are well-developed but they needn’t be in this movie. Selma is more about the heroic efforts to overcome the evil of racial hate than it is about the hate itself. So I will give the villains here 3 Villains out of 5.

Perhaps the most striking thing about Selma is how it echoes the challenges of race relations in America today. We are still seeing voter identification laws passed which limit the ability of the poor and impoverished to cast their votes. We are still wrestling with police violence against people of color – and how the current institutions protect these actions. Selma shows us that a lot has been won in efforts to afford equality to all, but it also reminds us that we still have more work to do. I give Selma 5 out of 5 Reels.

King leads by example and changes the people around him and people all across the nation. We are witness to his strength and force of character. We are also shown that our heroes are not always perfect. Often, Scott, you and I look for a transformation in the hero, but the transformation King induces in others is second to none. I give Martin Luther King, Jr. 5 out of 5 Heroes.

In our study of villains over the last year we’ve seen a lot of “mastermind” villains – villains who keep safe in the shadows and have others do their dirty work for them. We definitely see that here. George Wallace as the governor of Alabama has the power to reign in the police and to force the registrars to accept Black applications for voter registration, but he chooses not to. He wants to uphold the institution of racial supremacy. We’re witness to the mindless anger and hatred of the crowds in Selma, Alabama. It’s a difficult image to watch because it was real. I give the mastermind and institutional villains 4 out of 5 Villains.