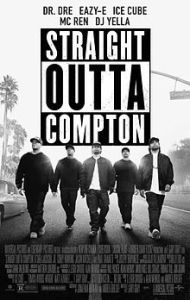 Scott, Dr. Dre and Ice Cube produced their own biopic. Does it deserve it’s good rap?

We’re introduced to Eazy-E, a mule for the local drug dealer. He’s running drugs but he wants to move on to something a little more… sane. And a lot less dangerous. When his friend Dr. Dre proposes he invest some of his drug money in a rap album, he’s dubious. But between Dre and their mutual friend Ice Cube, they convince Eazy-E to bankroll the new group. Not only do they convince him to pony up the cash to produce the first single, but also convince him to rap on it.

The group decides on a name, NWA, and they turn out a hit single. During a live show, music agent Jerry Heller (Paul Giamatti) sees the group’s potential and approaches Eazy E, who hires him. Soon NWA has a record label, Priority Records, which produces NWA’s first album, Straight Outta Compton. It becomes a smash hit, and NWA is on its way to legendary fame.

Scott, I have never appreciated rap or hip-hop music. It never reached me. And after watching Straight Outta Compton I can see why. These young men were rapping about their inner city situation, something completely outside of my experience. They were living in a world surrounded by drugs and crime. And a police force that assumed their guilt just because they were black and hanging around on the streets. No wonder they created a hit single called “F* the Police.”

Unlike so many biopics we’ve seen, this one had a lot of heart. Even though I felt the drugs, sex, and crime were watered down for public display, I was drawn into the world of NWA and grew to appreciate the enormity of their accomplishment. They created a new genre of “Gangsta Rap” that continues to have an impact today.

You’re right, Greg. On the surface, Straight Outta Compton is a movie about a rap group. But it is so much more than that. This film is about human relations – how those relations form, how they evolve, how they unravel, and how we clean up the mess. Compton makes you think about the ways that human beings treat each other, in the good sense but mostly in the destructive sense.

For the most part, Straight Outta Compton focuses on the ability of a group of African-Americans to overcome the institution of racism. Yes, we know that the film cleaned up its portrayal of this hip-hop group, but there is still much more than a kernel of truth in Compton’s message about the dangers of a racist police force. The anger in the song lyrics seems extreme yet understandable.

These are flawed heroes. Eazy-E earns his money running drugs – a strictly illegal vocation. But he sees the drug business as a losing proposition. The dangers outweigh the return on investment. When Dr. Dre approaches to start a record label, he is dubious at first (a classic call to adventure and refusal of the call) but then jumps in with both feet. Dre is painted as a good kid who has dreams of setting the world on fire with his DJ mastery. There’s even a classic scene where Dre is told not to spin that hip-hop stuff and play the master list. But he breaks the boss’s rules and gets the crowd hopping to his mad licks. And Ice Cube has the lyrics. He’s the poet of the group. In a lot of ways, this is a classic rock and roll success story complete with the excess in alcohol, drugs, and sex. But these heroes also have to deal with the seedy underworld of crime as the people running the show are criminals.

In some ways, this movie tells the familiar tale of the rock’n roll group that can’t handle success and must disintegrate. There is a Beatle-esque sequence involving the group writing song lyrics that skewer Ice Cube for leaving the group, followed by the Cube returning the favor in his subsequent songs. We see redemption at the end when the guys patch things up.

The sleazy embezzling Heller character is interesting. He is a mix of the good mentor and the dark mentor. He helps NWA achieve superstardom but in the end Heller reveals himself to be a lying cheat. Another manager is later shown to be crooked and pays the price by having his office dismantled by a baseball bat. We’ve seen this sleaze in the music industry in last year’s Jersey Boys and Get On Up.

There aren’t a lot of secondary characters to review in this movie. There are a lot of minions – people who are hangers on, coasting on the coattails of NWA. There is also what we call a “System” in the police – who are cast as oppressors in this film. Usually there is a single character who might represent the face of the minions or the police, but this film does a disservice by making both a nameless, faceless mass.

Straight Outta Compton was not meant to appeal to an older, non-rappy guy like me. Yet I found myself strangely moved by the film. I found myself rooting for these underdog heroes and appreciating the systemic obstacles placed in their road to success. I’m referring, of course, to the systems of racism and power-abusing law enforcement. This film was well-made and quite interesting. I’m happy to award it 3 Reels out of 5.

Our NWA heroes are not choir boys but they nevertheless travel the classic hero’s journey that includes a departure into the unfamiliar world of celebrity status, help from mentors (both good and bad), encounters with lovers, and battles with villainous institutions. Eazy-E’s death in the end was poignant, too. I’ll give this group a rating of 4 Heroes out of 5.

As you mention, Greg, there aren’t many supporting characters. Heller is a scumbag for cheating the group but he also helped them in some important ways. The appearance of Snoop Dogg and others is inconsequential. Because there isn’t much here, I can only award 2 Cast points out of 5.

Straight Outta Compton is another classic rock-n-roll story, except this time it has a happy ending – mostly. It isn’t surprising that you and I identified with these young men, despite the differences in our backgrounds. We admire people who start with nothing and rise to successful heights.

Not only that, but there are significant transformations here. Dre and Ice Cube grow from young hoodlums into mature adults who are leaders in their respective industries. Even Eazy-E comes to realize that he let money and fame cloud his judgement and he renews his friendship with Dre and Ice Cube, only to be struck down in his prime by AIDS. It is a story of mythic proportions, one that anyong can identify with. I give Straight Outta Compton 4 out of 5 Reels and 4 out of 5 Heroes.

The secondary characters are few and far between. The one character of interest is Heller and he plays both good and bad mentor. The mass of hangers-ons and evil police are hardly noteworthy. I give them 2 out of 5 Cast points.