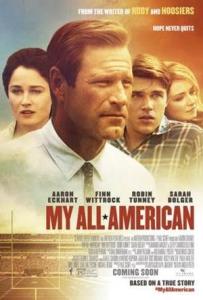 Greg, are you ready for some football?

We meet a young high school student named Freddie Steinmark (Finn Wittrock), who has a passion for playing football and a father (Michael Reilly Burke) who helps train him. While playing for his high school team, Freddie befriends the quarterback Bobby Mitchell (Rett Terrell). Freddie is the star player on his team, but his relatively small size means that most big-time colleges are uninterested in recruiting him. Freddie and his dad become discouraged.

But Freddie captures the attention of University of Texas football coach Darrell Royal (Aaron Eckhart). Royal recognizes that Freddie isn’t the biggest kid, but he has the biggest heart and offers him a spot on the team. Soon, it’s clear that things aren’t going well for the Longhorns and Royal needs to make a change. The seniors aren’t following the new plan, but youngsters Freddie and James Street (Juston Street) get the new plays and they are moved up to first string.

As Freddie nears the end of his junior year he has trouble with his leg. He reports to the doctor and finds that he has bone cancer. This is a devastating blow but it doesn’t dampen his commitment to his team.

Greg, I admit to being a sentimental fool. Movies like this bring me to tears, even when I feel completely manipulated by the filmmakers. Everyone knows the basic plotline of these maudlin tearjerkers. We meet a wonderful person, an individual who is so virtuous and so wholesome that he really doesn’t exist in the real world. I don’t care that this movie portrays our hero as too perfect. Freddie Steinmark embodies our society’s most treasured attributes, and that makes him a hero worth rooting for. Naturally, when he dies, it crushes us.

This hero story taps into a deeply held archetype we have for the hero who dies before his time. Billy Joel sang, “Only the Good Die Young” for a reason. There’s a poignancy to a tragic early death that moves us at the deepest of levels. The poignancy is only magnified here by the perfect person that Freddie is portrayed to be. The hero transformation is physical and emotional; Freddie trains his heart out to become a great football player. Later, he is compelled by the worst of circumstances to acquire grit and courage.

Screenwriter and Director Angelo Pizzo is no stranger to such heroic sports stories. He also penned historic sports films Rudy and Hoosiers. What is interesting in all three stories is the importance of the “runt of the litter.” They all feature a young person who is smaller than his teammates, but makes up for it with heart.

As a story, My All American breaks the traditional mold. This is pretty much a story of a young man who has everything going his way. There isn’t much conflict until well into the third act when Freddie is diagnosed with bone cancer. He stands up to it as he did with all his other obstacles. While he ultimately succumbs to his illness, he faces it with bravery. There’s not much of a transformation here. He was a strong hero at the start, and he finished the same way. Usually, such a hero transforms others. But there is no catalytic effect in American. This is just a story of someone who died the way he lived – full on.

Scott, I’m constantly amazed by the power of sport in American society. There is something heroic in becoming the very best one can be. And if the sports hero has to overcome uneven odds to succeed, all the better. But there is an imbalance in this hero worship. We pay our sports heroes more than our teachers, first responders, and warfighters. Somehow watching someone be better than we can be is more rewarding than actually being better than we can be. It’s a curious phenomenon.

You’re right, Greg. Since ancient times societies have tended to worship their warriors, and in this film the sport of football is seen as a symbolic (or not so symbolic) form of warfare. I find it ironic that this movie, which glorifies Freddie’s ability to lay waste to his opponents, comes out just before another movie (Concussion) offers a stern indictment of the sporting act of laying waste to others. Our culture is changing. I suspect that the Freddie Steinmarks of the football world will not be worshipped much longer.

But let’s turn to the secondary characters in My All-American. As you point out, the villain of the story is not a person but is in fact cancer, the one thing that precipitates Freddie’s demise. We’ve seen cancer as a villain before in The Fault in Our Stars. Freddie is benefited by numerous mentors including his dad, his high school coach, and Daryl Royal, coach of the University of Texas. As befitting a hero, Freddie also has a loyal love interest who assists him emotionally. These are all central elements in the classic hero’s journey.

My All American won’t be winning any Oscars, but it is still a fine film of how someone can rise to be the best that they can be. There’s not a lot of drama here. We’re witness to Freddie’s growth as a spunky football kid to a spunky football adult. Even at his worst, Freddie doesn’t falter. It’s a bit of a monotone and so I can only award My All American 3 out of 5 Reels.

Freddie Steinmark started out small but grew to hero status by his commitment. While we look see no transformation in the hero or those close to him, Freddie embodies the things we value in our heroes. He was fearless in the face of danger, devoted to those he loved and who loved him, and had a strong moral compass. As a movie critic, he’s not the hero I was looking for, but he exemplifies all the things we value in our heroes. I give Freddie 4 out of 5 Heroes.

The secondary characters in this film are cardboard cutouts of stereotypical supporting types. All the other football players were sort of minions who just played along. The coaches were tough guys who followed the leader. The mom and dad were the epitome of the 1950s parents. It’s all pretty dull and I can only muster 2 out of 5 Cast points for them.

You’ve described this movie to a tee, Gregger. My All-American tells the story of a tragic early death and milks it as effectively as any movie possibly can. The film taps into a powerful archetype about the heart-wrenching loss of vast human potential. Our emotions are shamelessly manipulated by the filmmakers but we’re so in love with the hero of the story that we don’t even care. We just enjoy the ride. My All-American is good wholesome fun and a fine story well worth watching. I give the movie 3 Reels out of 5, also.

Our hero Freddie is a remarkable kid with so many terrific qualities that we celebrate every one of his successes. He’s an underdog that we’re all drawn to and root for with great relish. Freddie traverses the hero’s journey with stylish flair and dexterity until he meets the only obstacle that he cannot overcome — cancer. His heroic gift to the world is accomplished posthumously; to this day he remains an inspiration to everyone at the University of Texas. I give Freddie 4 Heroes out of 5.

I enjoyed the secondary characters a bit more than you did, Greg. Aaron Eckhart does a stellar job in his role as Darrell Royal, the legendary Texas coach. As a mentor, Royal strikes just the right balance between toughness and kindness. I do agree that some members of Freddie’s support team are not terribly memorable, but they play their roles in solid workmanlike manner. I’m okay giving the supporting characters a rating of 3 out of 5.