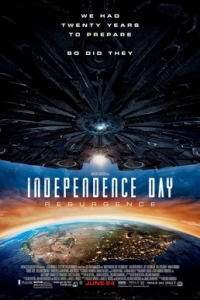 Just in time for the Fourth of July, it’s the resurgence of a bad film from 20 years ago.

Actually, I semi-enjoyed the original film with Will Smith. Did this new one measure up?  Let’s see.

It’s 20 years after the aliens invaded the Earth and we repulsed their attacks. The captured aliens, who were previously dormant, have become strangely animated. It turns out they aren’t angry – they’re celebrating because the mothership is returning. Now it’s up to the human race to re-prepare for the oncoming invasion.

Fortunately, humanity has learned a lot from the alien technology left behind from the prior invasion. Still, they are vastly outnumbered and outgunned by a mothership that is the size of a continent. The alien ship begins emitting a powerful laser beam into the earth with the goal of harvesting our planet’s molten core.

Scott, I was not a fan of the original Independence Day and Resurgence is a pale imitation of a lousy original. All the original characters are back, except for Will Smith’s character who died in the 20 years between events. He’s replaced by his son Dylan Hiller (Jessie T. Usher) and two friends Jake Morrison and Ritter (Liam Hemsworth and James A. Woods). There’s some sort of animosity between Jake and Dylan that is barely explained.

Just as it was 20 years ago, there are too many stars in this film. Nobody gets much screen time and you never feel close to any character. The result is that you never get invested in anyone and so you cannot get invested in the story. ID:R is a lackluster affair, to be nice.

Yep, this summer of 2016 is turning into a major suck-fest. It’s still July and there’s still time for the movie industry to redeem itself. But boy, are we thirsty for a decent movie or what? You’re absolutely right about too many stars spoiling the broth here. We just reviewed Now You See Me 2 and it had the same problem of many stars but little shine.

The entire story is by-the-numbers and routine. We have aliens attacking and we have humans fighting them. It looks like all is lost until a fallen, has-been hero gets his sh**t together and comes to the rescue. The aliens have an evil queen, and of course the evil queen is easily tricked into making herself vulnerable to attack. I’m struck by the vast number of alien movies that portray aliens as insects with a hive mentality and ant-like colonies and hierarchies. Moviemakers must figure that these types of animalistic, pure evil villains are easy to root against.

Independence Day: Resurgence is simple popcorn fare. There’s not a lot of depth here. It’s a run-of-the-mill attack of the aliens story with no surprises and no heart. While the CGI was good, I am inured now to all CGI fests. I am far past the point where special effects affect me. I expect high-quality special effects. I expect that filmmakers can make anything happen on screen. So when “anything” *does* happen, I’m not the least bit impressed. I feel that they’ve done was was expected. I give ID:R just 2 out of 5 Reels.

The heroes in this story are a watered-down version of what we saw in the original. It apparently takes three people to replace Will Smith. Bill Pullman’s President is a mere shadow of his former self. Jeff Goldblum didn’t even try to pull off his usual geeky-science-guy act. He very much phoned it in. The female President played by Sela Ward was easy on the eyes, but didn’t command much of anything. I could go on quite a bit because there were so many characters and each were lackluster in every way. The hero’s journey here is supplanted by CGI and a rehashed plot. I give the heroes in this movie just 1 out of 5 Heroes.

It’s hard to say if there were any mentors in ID:R. Judd Hersch is back as the kindly grandfather. He gives kindly words of wisdom to some children. I guess that’s ‘kindly’ mentoring. However, I did notice a new mentor type – the Martyred Mentor. Will Smith appears as the hero who has died. He is remembered with great reverence and is held up as an example for the young heroes to live up to. Somehow, that character is greater in death than he was in life. This is the only thing that allows me to award 1 Mentor out of 5.

Greg, I think you’ve said it all, and the less said the better. Independence Day: Resurgence is lightweight fare even by mindless summer-movie standards. I came into the theater with fairly low expectations and they were met in every possible way. There’s nothing original to see here, but maybe people who enjoy aliens’ butts being kicked will get a charge out of this flick. 2 Reels out of 5 seems generous but that’s what I’ll give it.

As you mention, the heroes here are about as unmemorable as heroes can get. I didn’t see much of a hero’s journey or much character transformation going on. A rating of 1 Hero out of 5 seems generous once again. And as far as mentors go, the late great Will Smith character is the legend who inspires and Judd Hersch’s wrinkles make him wise. So let’s give these mentors a big 2 out of 5 as well.