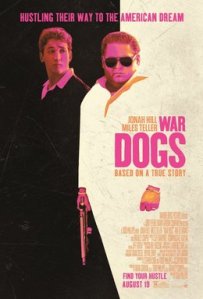 Greg, I think we just saw a flick about two poodles drafted into combat.

It’s time for a different role for Jonah Hill. One where he swears a lot. But wait, that’s every Jonah Hill role. Let’s recap.

We meet David Packhouz (Miles Teller), a massage therapist who struggles to make a living. He tries his hand at selling linens to old age homes, but goes nowhere. Now his wife Iz (Ana de Armas) is pregnant and he’s especially in need of extra income. Enter childhood friend Efraim Diveroli (Jonah Hill), who is now making boatloads of money as an independent arms dealer. Diveroli convinces Packhouz to join him in his growing business.

The have modest success picking up the crumbs of contracts left by the billion-dollar enterprise dealers. Their first big break comes when they run some guns out of Israel through Jordan and into the heart of Iraq. They succeed mainly because they don’t know the danger they’re in. When they get home they don’t know where their next big job will come from. But then they see a deal they can’t pass up: a contract for a billion rounds of ammunition. If they can pull this off, they’ll make hundreds of millions of dollars.

Greg, War Dogs is based on a true story about two twenty-somethings who don’t mind cutting corners in their big-deal makings, and in the end they find themselves in way over their heads. Although the film features two buddy-heroes, it’s clear to me that it’s a pairing of a psychopath anti-hero (Diveroli) with a more sympathetic hero character who shows he can grow and transform (Packhouz). In fact, one could argue that this movie tells Packhouz’s story. We learn how Packhouz struggled financially to the point of needing to join forces with the nefarious Diveroli, and then lived to regret the pairing.

So I’m curious, Greg, whether you view this film as a buddy hero film or as a dark mentor film in which our hero must extricate himself from the mentor. Actor Miles Teller seems to make it a habit of gravitating to roles in which his character falls under the spell of a dark teacher. Two years ago, in Whiplash, he was abused by J. K. Simmons’ character. In most buddy hero stories, each buddy helps the other buddy transform, but as Packhouz is the only character here who shows transformative growth, I lean toward viewing the story as more of a dark mentor tale.

Yes, Scott, I think you’ve nailed it. War Dogs is actually narrated by the Packhouz character so it very much seems to be a hero’s journey where the hero must extricate himself from a dark mentor. It *is* very much like Whiplash in that sense.

I’m seeing Miles Teller all over the place these days. He’s a true rising star. His performances are getting better with each film he appears in. However, Jonah Hill seems to be playing himself in every movie. He’s loud, obnoxious, and swears extensively. We saw it in Superbad, The Wolf of Wall Street, and This is The End. I am tired of this guy.

When we look at Hill’s character, Diveroli, it’s clear he’s a manipulator. He shows up when Packhouz is at a funeral – a vulnerable time. He takes advantage of Packhouz when his wife becomes pregnant – getting him to sign on at a time of need. Eventually, Diverolli reneges on his promise to share 30% of the company with Packhouz. Diveroli is not a good friend to have.

The movie works only because we see hints of goodness in Packhouz throughout the story, and we root for him to build on that foundation even when he makes one dumb decision after another. Yes, he’s skirting legal trouble, lying to his wife, taking unnecessary chances, and cavorting with the unsavory Efraim. But his potential for transformation is made abundantly clear and it takes his inevitable fall into an abyss of trouble for his conversion experience to happen.

We’ve already mentioned that Efraim plays the dark mentor role, and in a strange way the character of Henry, played by Bradley Cooper, attempts to take on a mentoring role toward the very end of the film. Henry is impressed by Packhouz’s integrity in not implicating Henry in the ammunition caper, and we’re left wondering whether Henry is “grooming” Packhouz toward another round of shady business dealings. I applaud the filmmakers’ decision to leave us wondering which direction Packhouz takes. Yes, by film’s end Packhouz transformed into a good husband and honest man, but is this change permanent? We can hope but we’ll never know.

War Dogs is an interesting, nearly light-hearted look at the world of weapons trade. We follow our fumbling hero-buddies as they navigate this morally-gray realm and root for them to succeed. The story is mixed with humor and intrigue and pulls us along for an entertaining ride. I don’t think this film will win any Academy awards, but, like the similar Wolf of Wall Street, offers a cautionary tale of greed and stupidity. I award War Dogs 4 out of 5 Reels.

While this appears to be a hero-buddy story, I think it’s really Packhouz’s story. We witness him telling simple white lies to his wife, followed by bigger and bigger lies until he loses her in the end. Ultimately, his lies and deceit lead him to be indicted on weapons charges and lands him in jail. He comes to his senses and rejects the dark world of international weapons trading and gets his wife and child back. It’s an entertaining tale of the redeemed hero and I give Packhouz 4 out of 5 Heroes.

I see two dark mentors in this story: Efraim Diveroli and Henry. Deivroli take on the shape of whomever he needs to when he is talking to someone. In Packhouz’s case, it is the form of best friend. This shapeshifting dark mentor leads Packhouz down a trail of lies and deceipt that ultimately land im in jail. Henry is the hidden dark mentor. He is a weapons trader who works in the shadows and only comes into the light to make course corrections for his own plans. I give these dark mentors 3 out of 5 Mentors.

War Dogs surprised me with its true-life portrayal of two guys in over their heads in the dangerous game of unscrupulous arms dealings. The story is a cautionary tale of greed and all the despicable things humans will do for money. Most importantly, the film warns us of the dangers of cavorting with the wrong mentor figures in life. If we hang out with dreck, our lives become dreck. There’s a lot to like in this movie but it’s doubtful that I’ll ever give it a second look. I’m awarding it a rating of 3 Reels out of 5.

We’ve seen this type of hero journey before in Miles Teller’s Whiplash. There’s clearly a descent into a dark world from which our hero Packhouz must escape. Interestingly, he doesn’t receive help from others; he must extricate himself on his own, and he does so by allowing the natural consequences of his poor decision making to unfold. Perhaps that’s the only way he will learn, and the only way any of us learn how not to live our lives. Again, it’s a good hero’s journey but not a great one. I give it 3 Heroes out of 5.

Greg, you and I agree on the mentoring in this film. One observation I might add is that time and time again Packhouz resists the positive influence of his wife Iz, who loves him and will love him whether he is rich or poor. I’ve noticed that in storytelling, men get in trouble whenever they defy the positive transformative influence of women. Overall, the mentoring in this story merits a rating of 3 Mentors out of 5.