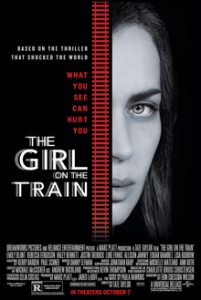 Hey Scott, is this the sequel to Gone Girl – on a Train?

Either that or it’s a sequel to Girl on Planes, Trains, and Automobiles. Let’s recap.

We’re introduced to Rachel Watson (Emily Blunt) who travels drunk into the city every day on the train. She passes the house she lived in with her (now) divorced husband, Tom Watson (Justin Theroux) and his new wife Anna (Rebecca Ferguson). Next door to them is the beautiful couple Scott (Luke Evans) and Megan Hipwell (Haley Bennett) with whom Rachel is obsessed. One day, Rachel observes Megan having an affair with a man who is not her husband and Rachel is distraught.

Rachel’s life gets more complicated when one day, while drunk, she follows Megan toward the entrance to a tunnel. She blacks out and wakes up at home bloodied and caked with dirt. She later discovers that she is suspected by police of murdering Megan. Rachel also discovers that the man Megan was seeing was a psychiatrist whom Megan was seeing professionally — until the professional relationship turned romantic. The situation gets very tense and complicated as Rachel confronts Scott with this information.

The Girl on the Train is the epitome of the “unreliable narrator”. We observe the world through Rachel’s point of view – but it’s the point of view of a deeply troubled woman. She was unable to have  a child with her husband and feels deep guilt and remorse over that. She begins drinking and blacking out. Then, after her husband has an affair with the realtor (Anna), he divorces Rachel and marries the realtor. The new couple now have a child and Rachel can’t bear the thought of them having the life she wants. So she breaks into their house and takes the child – however returns her right away. Rachel is one troubled soul.

As the main character, Rachel is the hero of the story. But she’s not the typical hero. She has few redeeming qualities. She abuses alcohol, she is a burden on her friends, she’s a child abductor, and she lives like a voyeur through the life of Megan and her husband. But we sympathize with her because she is so deeply wounded by the loss of the life she could have had. Despite her shortcomings, she is a pathetic character who has hit rock bottom, and we want her to get help.

Greg, for me the The Girl on the Train is a melodrama stitched together like a made-for-TV movie. About a third of the film is devoted to close-ups of Rachel’s face looking sad, confused, and concerned. The story plays out like a mystery — is Rachel a terrible and crazy person responsible for Megan’s death? Or is she a victim of brainwashing and abuse? It takes an interminably long time to unravel the mystery and get passed 25 minutes of Rachel’s dazed face, but we finally do get an answer.

There is a hero’s journey of sorts. Her journey to the dark, unfamiliar world begins when she recovers from an alcoholic blackout all bloodied and filthy. She is a suspect in Megan’s disappearance and is kicked out of her sister’s home. Heroes usually lack a missing quality that they must discover or recover to succeed on their journey. Megan has about a dozen such missing qualities; she lacks sobriety, clarity, self-confidence, courage, resilience, and overall sanity. Eventually, she does learn that she’s not crazy and that Tom has abused and brainwashed her.

So in terms of mentoring, Tom could be viewed as her Dark Mentor. Like many predators, he has groomed his victim and laid waste to her self-esteem. Good heroes are gradually able to extricate themselves from the nefarious influence of dark mentors, and Rachel does just this, although she appears to do it on her own without much positive mentoring. The psychiatrist (Edgar Ramírez) seemingly tries to mentor Megan and Rachel, but he just fills up space in this movie by representing an attractive male love interest with an exotic accent.

I think you’re being too harsh on this film, Scott. I thought the exposition of a mystery through the eyes of both the prime suspect and a hero with a faulty memory was compelling. I was constantly on the edge of my seat wondering who murdered Megan, and could it possibly be our hero? I was kept in suspense up to the end of the film. I’d recommend this movie to a friend.

However, I have to agree with you on the mentoring element of the story. While Rachel does have a friend who lets her live in a spare room, there are no guides for her. She has to depend on herself – someone who is inherently undependable. She must solve the mystery of the murder using her own faulty wits. She is on her own in this story.

I guess we just disagree, Greg, which is fine as long as we agree that I’m more right than you are.

The Girl on the Train is a mystery story that failed to hold my interest despite a premise that could have worked had the the director, Tate Taylor, been less obsessed with Emily Blunt’s face and more concerned with plot and character development. Our hero Rachel is riddled with more problems than I can ever remember a hero having — divorce, unemployment, alcoholism, depression, anxiety, a suspect in a murder case, and more. She’s a total mess yet somehow, without any help, clears up the mystery. I was not impressed. The Girl on the Train deserves to be shamed with a rating of 1 Reel out of 5.

As I’ve mentioned, there is a hero’s journey but it seems unlikely that Rachel could overcome so many serious problems without a huge team of therapists, self-help groups, and several years of healing. Yet she does gain clarity about the true nature of Tom’s abuse and thus enjoys a true personal triumph, not to mention a triumph over evil. But there aren’t very elements of the classic hero’s journey beyond the departure, suffering, and (hopefully) a transformation. So I can only award Rachel 2 Heroes out of 5.

The mentoring is pretty non-existent in the film, which is unfortunate given that we’ve never encountered a hero who needed more mentoring than Rachel. Just another example of this film’s sloppy lack of credibility. A Mentor rating of 1 out of 5 seems generous.

The Girl on the Train is a taut psychological mystery/thriller that had me guessing at every turn. It’s difficult to write for an unreliable narrator, and as it turns out, Rachel is as unreliable as they come. Her frequent blackouts leave her with the inability to depend on anyone, least of all herself. She falls so deep into despair that she even wonders if she committed murder. It’s pretty rare for me to become so enrapt in a character’s world that I forget that I’m in a theater. The Girl on the Train did just that for me. I give it 4 out of 5 Reels.

I don’t know what more you need for a transformational character, Scott. Here we have someone who is so very flawed that her own life is in danger. By the end of the film, however, she sidesteps her disabilities, solves the case, dispatches the villain, and gets the help she needs to overcome her alcoholism. This is a classic redeemed hero story. I give Rachel 4 out of 5 Heroes.

But we agree on the mentoring. There isn’t anyone helping Rachel on her journey and in that sense I have to agree with you that the story lacks some credibility. I would have liked to have seen at least one friend who lent moral support. I give the mentors in The Girl on the Train just 1 Mentor out of 5.