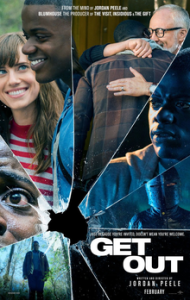 Well, Greg, it’s time to get out the old review pad and review this next movie.

Get out of town – let’s recap…

The story begins with a Meet the Parents-like scenario. Chris Washington (Daniel Kaluuya) is about to meet the parents of his girlfriend Rose Armitage (Allison Williams). Chris is concerned because Rose hasn’t told her parents that he’s Black, but she assures him it won’t be an issue. They arrive at the home of Dean (Bradley Whitford) and Missy (Catherine Keener), and Chris notes the odd behavior of the African-American couple, Walter (Marcus Henderson) and Georgina (Betty Gabriel), who work for the Armitages.

Chris is especially worried about Rose’s mother, Missy’s occupation – a hypnotherapist. He doesn’t trust therapists at all and hypnotists least of all. Missy promises to cure Chris of his smoking habit. Later that night, when Chris is craving a cigarette, he goes out on the lawn for a smoke. He encounters the lawnkeeper going for a sprint. When he goes back inside, Missy is there stirring a teacup in a way that causes him to go into a hypnotic trance. She makes him relive his mother’s death when he was a child. It’s a chilling moment for him and for the audience.

Greg, Get Out is both odd and oddly enjoyable. The movie taps into a great fear that many of us have involving the meeting of a significant-other’s parents. We want everything to go well, and so good storytelling demands that things go poorly. In Get Out, everyone Chris meets at his girlfriend Rose’s house is either slightly “off” or very much “off”. And it gets worse with time, leading one to wonder why Chris (along with every family in every haunted house movie) doesn’t run fast and run far much sooner than he does.

Despite operating from a predictable formula, this movie strays cleverly from it by focusing on racism in its ugliest forms. I was never able to quite figure out why horrible racists would want the consciousness of their loved ones to inhabit the bodies of what they consider to be racially inferior people. The racists seem to dwell on the so-called size and strength of African-Americans, but it still defies logic that white supremacists would perform this surgical procedure. In any event, the story follows a common pattern but does so in a fresh, albeit bizarre fashion, and the overall cinematic result is strangely enjoyable.

To elaborate on what you’re talking about, Scott, we have to let our readers in on the secret of the film: the aging white population of Rose’s family is killing black visitors and exchanging brains with them. So, the elderly white folk are inhabiting the young bodies of such people as Chris whom Rose is enchanting and bringing home to their demise.

It’s a sort of Invasion of the Body Snatchers with elderly white folk as the pods. The story gives director Jordan Peele an opportunity to expose white racism by putting Chris in the “special world” of the fish out of water. And by fish I mean a black man and by water I mean a sea of elderly white folk. It’s both embarrassing and embarrassingly funny to watch Rose’s family touch Chris’s hair, comment on his genetics, and praise Black celebrities (“I voted for Obama twice”).

Chris follows a good hero’s journey, being thrown into bizarre and dangerous circumstances. Unlike most hero stories, Chris receives no help; he’s totally on his own, although we can’t discount the assistance from afar from his pal Rod (LilRel Howery) back home who IDs Logan, the missing musician from Brooklyn. More than anything, Get Out is a story of survival, much like Gravity and the final act of Silence of the Lambs. The hero finds him/herself in the proverbial belly of the whale and does what it takes to basically not die.

In terms of transformation, there is certainly a series of sinister physical transformations taking place at the Armitage’s residence. Does our hero Chris transform during the story or as a result of the story? He certainly must summon up courage and resourcefulness to extricate himself from the dungeon of doom in the basement. This type of transformation in times of crisis is common in the movies (and in real life). We never see how Chris becomes a changed man in the aftermath of his ordeal, but we can infer with confidence that he’s forever changed.

With comedy and horror, story structure often gives way to shock value. Director Jordan Peele is half of the comedy duo of Key and Peele who have made a career of poking fun at racial issues. Both come from interracial families and have seen racism “from both sides, now.” Get Out is the culmination of Peele’s comedy career and with it he continues to mine racism for humor – and now horror as well.

So, it’s no surprise when no one in the movie really transforms. Chris is probably scared straight on white women – or potentially romantic relationships – for a while. He’s pretty much the same guy at the end of the film as he was at the beginning. However, the audience rose in cheers when Chris finally breaks his bonds and skewers Rose’s brother with the antlers of a stuffed deer. There was definitely some catharsis for the viewers in my theater when he transforms from prey to predator – taking out the whole family one by one.

Get Out shocked and entertained me for two hours, thanks to numerous creepy and memorable characters plus a grisly secret kept by the family whom our hero is trying to impress. The racism in the film was blunt and discomforting to a comic extent, which was probably the intent of the filmmakers. The performances by the cast were excellent and the storytelling was solid, despite the family secret defying logic from their racist perspective. I award this film 3 Reels out of 5.

The hero’s journey was bold and required a fierce independent spirit for our hero Chris to survive. It is a true story of survival requiring courage, resilience, resourcefulness, and necessary brutality. My only complaint is that Chris takes a little too long to ask Rose if they could leave the house. The minute that Walter, the groundskeeper, came at Chris at full speed at 3am at night was the minute that Chris should have hightailed it home to safety. But he stayed and paid the price, thereby treating us to a horrific ordeal from which he escapes. I give his heroism 3 Hero points out of 5.

There isn’t much in the way of overt transformations in this film, other than the obvious physical mutilations carried out by Dean and Missy Armitage. As I’ve mentioned, Chris couldn’t have extricated himself from the horror of his situation without transforming mentally, emotionally, and physically. These are the types of transformation we discuss in our latest book, and they happen when real world heroes confront emergency situations. Still, we never see Chris as a changed man after his ordeal, and so I can only award 2 Transformation deltas out of 5.

Get Out is an uncomfortably comedic horror film. It’s said there is truth in comedy.  Surely the funniest moments in the film were of white people saying stupid things in the presence of a black man. Both white folk guilty of such moments and black folk who are subject to them feel a sense of discomfort that gives rise to humor.

The image of white people taking on the bodies of black men and women may be a metaphor for white people adopting black culture: minstrels in blackface, tap dancing musicals, rock and roll music, and modern rap are all examples of how whites take on black culture and make it their own. And in so doing rob blacks of their own cultural identity. For holding up a funhouse mirror to American racial culture, I give Get Out 4 out of 5 Reels.

In the typical horror movie, the protagonist commits some social sin (say, teenagers having sex, drinking alcohol, and smoking pot). Then they go somewhere they should not be going (say, into an abandoned house). And must pay the consequences (attack by an axe wielding madman).

Chris is just such a character. He’s defied social norms by dating outside his race. He is transported to a scary mansion where he meets the evil family looking to rob him of his brain and his life. It’s not what I’d call a hero’s journey, but it is a classic horror plot. I give Chris 3 out of 5 Heroes.

As we’ve discussed, there isn’t much transformation going on in Get Out. This story isn’t so much about transforming the characters in the movie. But, perhaps, the people transformed are the viewers. We can laugh a bit at ourselves and become more aware of our latent and subtle racism. And so we can transform into more aware individuals. I give Get Out 3 out of 5 Deltas for transforming the audience.