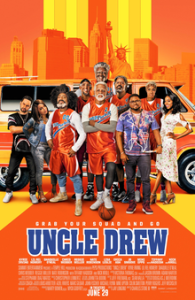 Scott, this story of geezers playing basketball really drew me in.

Greg, please, I beg you to stop with the puns. I say ‘Uncle’! Let’s recap.

We’re introduced to hapless loser Dax (Lil Rel Howery) who is coaching a basketball team prepping for the 50th anniversary Rucker Park Tournament. His best player Casper (Aaron Gordon) is being courted by his childhood arch-rival Mookie (Nick Kroll). When Mookie raids his team and all his players defect to Mookie’s team, Dax’s gold-digging girlfriend Jess (Tiffany Haddish) also defects to Mookie and throws him out. Now Dax has to find a new team or forfeit his life savings which he used to secure his place in the Rucker competition.

Enter Uncle Drew (Kyrie Irving), a 1970s star of the Rucker competition who happens to heckle the team during practice one day. Drew defeats the team’s star player in a one-on-one competition, a feat that catches the eye of Dax. Somehow Dax convinces Drew to come out of retirement to play in the tournament, but only on the condition that Drew assembles his own team. Also coming out of retirement now are Preacher (Chris Webber), Big Fella (Shaquille O’Neal), Lights (Reggie Miller), and Boots (Nate Robinson).

Scott, I’m not a fan of sports films because you typically have to be a sports fan to appreciate the story. But Uncle Drew is less about basketball and more about living a life without regrets. Dax gave up on basketball in middle school because he last a game to Mookie. He lost his confidence and never played again – choosing to coach instead. When he has to recruit a new team, he seeks out the mythical Uncle Drew who was an amazing player in the 1970s. But Drew blew it all the night before a championship Ruckers game by sleeping with Big Fella’s girlfriend. It’s been 50 years and the two haven’t spoken and Uncle Drew withdrew from basketball forever.

One detail about the story I wish they had spent a little time on was what Ruckers Park was and why it was important to these characters. I had to do a Wikipedia search to learn that many successful professional players came out of the Harlem Ruckers outdoor basketball tournament.

Another interesting element of this story is that Uncle Drew is a mentor character to young Dax. And like the Karate Kid, Drew receives the “call to adventure” and initially “refuses the call”. This is usually the hero’s journey. Drew also is a classic mentor in that he is a fallen hero. This is a common  theme for mentors. In mending his ways with Big Fella, Drew also shows Dax that you have to be willing to fail to succeed, that you only achieve as much as you aim for, and that being a member of a team is like being a member of a family.

This is a lot of philosophy for screwball comedy. And Uncle Drew delivers a three-pointer. (I did learn something about basketball, after all).

Uncle Drew is a quirky comedy with a heart of gold. Like all good heroes, Dax carries with him a deep wound of having been humiliated on the basketball court having his shot blocked in the last second of a championship game. It’s a wound that we know is crying out for healing and redemption later. This movie goes overboard (unnecessarily) in portraying the shot-blocker as a complete douchebag. To make redemption even more necessary (and satisfying), the douchebag is also dating Dax’s ex-girlfriend. The ensemble cast of former NBA players just serves as amusing window-dressing for Dax’s heroic journey.

Greg, I wanted to like this movie, but it was all a bit too strange for me. We’re presented with the impossible scenario of men in their 70s competing on the basketball court with men in their 20s. Even an elderly man who has spent years in a wheelchair transforms instantly into a basketball all-star. In most films of this ilk (e.g., Big and Freaky Friday), we’d see our heroes consume a magic pill or have some magical person cast a spell on them to restore their eroded skills. But this movie just shows old people “naturally” doing things that old people cannot possibly do. I needed some mysterious magic injected here for my belief to be suspended.

Is it all mere zany comedy or is there a deeper meaning? Perhaps this film represents a statement about the unsurpassed power of belief and self-confidence, with the geezers’ exploits serving as comic metaphor. Or more likely, the filmmakers wanted to do a movie with former professional stars in it whom we could cheer for. I’m not certain, and maybe figuring it out isn’t important. Like I said, it was a strange premise – but as I also have said, it’s also a sweet story of love and redemption.

Uncle Drew is a fun movie with more heart and inspiration than I expected. The writing, directing, and acting were all top-notch. I was surprised that people who are known for their athletic abilities turned out to be great comedic actors. The story hits all the turning points we expect in the classic Hero’s Journey and we had a good time. The jokes about old people needing to have the heat turned up and Dax’s confusing 8-track tapes with Nintendo cartridges were quick-witted and fun. I give Uncle Drew 4 out of 5 Reels.

Dax as a hero starts out pretty well. He’s got an internal hurt that he has to overcome. But as a character, Dax is overshadowed by Kyrie Irving as mentor Uncle Drew. The story carries two plotlines of redemption – one for Dax and one for Drew. It’s very entertaining, but it detracts from Dax as a hero. I give Dax and Drew just 3 Hero points.

There aren’t a lot of archetypes to write about here. Drew as the MENTOR is a fallen hero who needs redemption. We’re treated to the SOUTHERN BAPTIST PREACHER in Preacher. Otherwise, the team is a collection of caricatures (Boots resembles Frederick Douglass, Lights resembles Michael Jordan with his glasses, and Big Fella looks like Wolverine’s grandfather). I can only muster 2 Arcs out of 5 for this cast.

Uncle Drew is a heartwarming comedy that didn’t quite achieve its full potential. The film isn’t an air-ball, as it does drive home the importance of love, loyalty, and redemption. These are all great heroic qualities. But the film is far from a three-pointer, Greg — and by the way, I’m quite impressed that a non-sports geek like you knows what a three-pointer is. These old geezers are far too ancient to be defeating men the age of their grandchildren, indicating to me at least that some magical or mystical explanation is missing that should underlie the absurd premise. I award this film 2 Reels out of 5.

Our heroes are a commendable ensemble of guys who answer the call to an adventure on the basketball court. Of course the basketball is a metaphor for life, as we all make mistakes that we need to atone for in our words and actions. The journey isn’t exactly dangerous, but there is great emotional risk for our heroes. They do emerge transformed by uniting together, by setting aside their pride, and by stepping up to do the right thing, the heroic thing, during crunch time. I give these heroes 3 Hero points out of 5.

Once again there are several noteworthy archetypes: there is the underdog in Dax and in the players all being extremely old. We also have the archetypes of the bully, the unfaithful girlfriend, the disloyal friend, the love triangle, and the deceptively dangerous old guy (which we see in movies like Red). All told, these archetypes earn 3 Arcs out of 5.