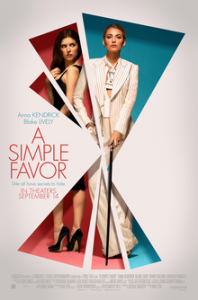 Greg, I have a favor to ask but it’s not simple. Will you review this movie with me?

We meet Stephanie Smothers (Anna Kendrick), a single mother raising her young son. Stephanie has her own youtube channel that she uses to demonstrate her latest recipes and crafts. We learn from her most recent video that Stephanie’s best friend Emily (Blake Lively) has been missing. Three days earlier, Emily asked Stephanie to pick up her son up at school and babysit him while Emily went on a business trip to Florida. We then see flashbacks about how the two women met, and about how Emily is a rather unconventional mother and wife to her husband Sean (Henry Golding).

When Emily’s body is found in a lake, Stephanie quickly gets over her concern for her friend and starts comforting husband Sean. And what comfort she gives!She has sex with him and moves into his house, taking care of both her son and Sean’s. She goes so far as to remove all of Stephanie’s clothes from the closet and replace them with her own. But things take a dramatic twist when she returns one day and all of Stephanie’s clothes have been returned to their rightful place. Is it a ghost, or is there something more sinister going on?

Greg, A Simple Favor is a dark comedy that veers dangerously close to being too dark for a comedy and too comedic to be dark. Yet the strange mix works on the strength of our two strong female lead characters, Stephanie and Emily. Both these women have dark edges to them. Emily, the sister-killer, is transparent and wears her darkness on her sleeve, whereas Stephanie, the brother-fucker, hides hers behind a façade of a benign and perky homemaker. Emily’s husband Sean bears the brunt of these two women’s sinister sides. It’s a love triangle with three dark, deadly points that deftly poke us with humor tinged with treachery and ruthlessness.

There a couple of over-the-top plot twists at the end that convolute things unnecessarily. But I can forgive the filmmakers for giving us an overly strong martini because that’s the point of the film. The message we get is that people get in trouble when they overdo things – too much alcohol, too much debt, too much life insurance, too much sex, too much heroin, and too much denial of past indiscretions all eventually catch up to these characters. And in a comic irony, a filmed murder attempt gives Stephanie’s homemaker youtube channel what she wants most – a million followers.

I think A Simple Favor is what you might get if Wes Anderson had written Gone Girl. This is a quirky film that could be called a “Cozy Mystery” – except for all the killing and sex. Anna Kendrick is great as the naive single mom homemaker who goes on the trail looking for a murderer. Her perky innocence is a stark contrast to Stephanie’s worldly lifestyle. It’s this sort of contrast that make stories fun.

I have to agree with your assessment that Favor doesn’t fall cleanly into either the comedy or thriller genre. And I’m OK with that. I think director Paul Feig and writer Jessica Sharzer did a great job of lifting elements of suburban comedies (like Jason Bateman is famous for) and suburban thrillers (like A Girl on a Train) to create a Frankenstein’s monster of a movie that entertains both as a comedy and a mystery. I had a great time with this film.

Overall, I enjoyed A Simple Favor. The movie is full of surprises and dark twists and turns. Anna Kendrick delivers a superb performance as a goody two-shoes wife and mom whose past indiscretion costs the lives of her husband and brother. Blake Lively also turns in a lurid performance as an edgy, mysterious friend whose past is also murky and violent. These two actresses enjoy a wonderfully disturbing chemistry that hold our attention for two hours. A Simple Favor is fun and creepy entertainment, earning it 4 Reels out of 5.

Our anti-hero love triangle is certainly thrown into the hero’s journey once the two women become friends and even more so after Emily goes missing. It’s interesting to watch Stephanie become transformed; her association with Emily chips away at her happy, perky façade and reveals her true vixen nature. Emily is damaged at an early age and seems unable to transform, while Sean appears to be in pure survival mode as he navigates his way in and around these two complicated women characters. Overall, it’s a nice blend of heroism and anti-heroism that has me awarding this trio 3 Hero points out of 5.

There are several good juicy archetypes in this film, such as the archetype of the love triangle, the Cain and Abel siblicide, the drug addict, the homemaker, and the femme fatale. These archetypes merit a rating of 3 Arcs out of 5.

I also enjoyed A Simple Favor in all its quirkiness. Kendrick and Lively make for enjoyable opposites and Henry Golding is easy on the eyes and delivers a fine “befuddled husband” performance. This comedic mystery hits the right balance between comedy and mystery. I give it 4 out of 5 Reels.

I differ with you on the anti-hero evaluation, however. It’s pretty clear that Stephanie is the flawed hero on a mission to solve a murder, and Emily is the villain intent on raking in insurance money after killing her sister. I give Stephanie 3 out of 5 Heroes.

Finally, the archetypes here are a little weaker than we’ve seen in the past. There’s a COP WHO’S SEEN IT ALL and the TYKES IN GRADE SCHOOL. I can only muster 3 out of 5 Arcs.