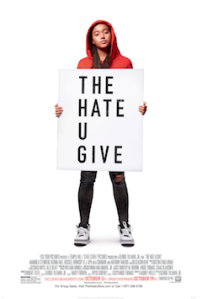 Scott, after all the grade-school movies we’ve seen this year – finally something that rings true.

You wanted realism and you got it, Greg. Let’s recap.

We’re introduced to Starr (Amandla Stenberg), a 16-year-old African-American girl who lives in a disadvantaged neighborhood, but her parents send her to an upscale private school so she can escape the ghetto. Her boyfriend at school, Chris (K.J. Apa) is white and she hasn’t introduced him to her parents yet. Starr lives in two worlds – the world of underprivileged blacks, and the world of white privilege. As if that wasn’t enough, she also straddles the world of crime (her uncle King, Anthony Mackie, runs a drug ring) and the law (represented by her uncle Carlos, Common, who is a police officer). Starr is being pulled in four directions at once. Something has to give.

One evening she and her teenage friend Kahlil (Algee Smith) are out driving but are pulled over by a cop for failing to change lanes without the turn signal on. Kahlil, the driver, is asked to get out of the car and wait while the cop runs his license. After Kahlil reaches into the car to get his hairbrush, the cop opens fire and shoots Kahlil, thinking the boy is holding a gun. Kahlil’s death sets off a firestorm especially when the cop is found innocent of any wrongdoing by the grand jury.

Scott, we’ve seen a lot of teen-angst movies in the last few years (Eighth Grade, The Edge of Seventeen, Searching), all of which I’ve found to be severely sugar-coated, “After School Specials.” While THUG is still a watered-down version of reality, it hits much harder than any young adult film we’ve seen in a long time.

Placing our hero squarely at the intersection of both racial and political divides allows the filmmakers to address very tough problems through the eyes of a naive and sensitive young woman. She starts out hiding at school, trying not to be confrontational. But once the grand jury decides that charges will not be pressed on the police officer, Starr’s voice opens up. She realizes that Kahlil cannot speak for himself, so she must speak for him.

There’s also a poignant moment in the story when she confronts her police officer uncle. He explains what it’s like to be a police officer when he pulls over a young black man. It’s a moment that gives this film balance. It’s not just the point of view of the victims, but also the men who hold the guns. It doesn’t excuse the wrongful death of Kahlil, but it does give Starr, and the audience a chance to realize that the police aren’t evil – they’re human, too. And in those pullovers, both the driver and the officer are very scared and that leads to a scenario that can quickly erupt.

Well said, Greg. I commend The Hate You Give for daring to delve into America’s deepest wound: race relations. Our hero Starr Carter is a 16-year-old African-American who has been raised to live up to her name (Starr), i.e., a person who is destined to shine brightly in the darkness. At first she evades that destiny by staying out of trouble and avoiding being who she truly is. We see this avoidance in her acknowledgement that she is Starr 1 while at home and Starr 2 when attending her all-white affluent high school. After the violence that catapults her onto her hero’s journey, Starr’s two lives are fused into a single empowered life that is the courageous, resilient “star” that she was always meant to be.

Going into the theater, I was curious whether and/or how this movie could achieve a balanced perspective. Greg, you’ve identified the key scene. The Hate You Give clearly emphasizes the viewpoint of the African American community more than it does the police community. One might argue that true balance would require equal time with the family of the cop who kills Kahlil. Yet we do (somewhat) get this perspective from Starr’s uncle who explains the difficulty and complexity of routine traffic stops where it is often unclear whether a driver is reaching for a weapon. During this conversation Starr manages to get her uncle cop to admit that the police force applies a double standard in expecting more compliance from African American suspects than they do from White suspects.

This is a brave, bold film for addressing such a profoundly painful and difficult subject for most Americans to talk about. And yet we desperately need to talk about it, in a civil, respectful way that honors both the families of the victims and the Black Lives Matter movement. There is a way out of this mess, and The Hate U Give does give us glimpses of how compassion and understanding can help us navigate through America’s deepest sore spot.

The Hate U Give finally reflects the realities of a young woman in America – much more so than other YA films we’ve reviewed. Even still, this is a sanitized version of reality. But truth be told, I don’t think reality would have been a palatable presentation for a young adult offering. The author goes to great lengths to give a balanced story – putting our hero in a situation where she must straddle multiple lines of battle. The performances from all the players were authentic and avoided stereotypes. I give THUG 5 out of 5 stars.

Starr is a wonderful role model for young woman, and young men alike. She starts out naive and wants to hide in the shadows to protect herself and her friends. Ultimately, though, she realizes that she must be the voice for the unheard and stands up to authority. She risks her popularity, her privilege, and ultimately her safety for what she believes is right. She not only changes herself, but becomes a change-agent for those around her and her community. I give Starr 5 out of 5 Heroes.

Finally, we see a number of archetypes that verge on stereotypes. But the filmmakers take care not to cross the threshold. The white BOYFRIEND isn’t given enough dimension to warrant the respect he wins in the end. The DRUG DEALER is a typical of what we’ve seen in other films, yet he’s woven into Starr’s life as more than just a side character. The POLICE OFFICER who is Starr’s uncle shares his own unique conundrums that make him non-stereotypical as well. I give them all 4 out of 5 Arcs.

The Hate You Give bravely explores one of America’s most divisive topics, namely, the issue of racial injustice. The film does so in a way that is intelligent, poignant, and sensitive to multiple viewpoints. After watching The Hate You Give, it would be difficult not to appreciate the supreme challenges facing African-Americans in our country, challenges that are economic, social, political, and familial in nature. This movie is empathy-building and should be required viewing for all Americans. I give it 4 Reels out of 5.

Our hero Starr, is a fabulous champion who is thrown into horrific circumstances and is forced to confront them and grow from them. Watching Starr become her true self is like reading a textbook on the hero’s journey. Starr undergoes departure, initiation, and return, with the initiation stage the centerpiece of the film. During her initiation, Starr encounters an excruciating darkness, menacing villains, and loving mentors. Her new and dangerous life situation forces her to evolve and transform into her authentic self, a self that is a courageous, resilient leader. I can’t imagine giving Starr anything less than 5 full Hero points out of 5.

With regard to archetypes, we encounter in the movie the underdog, a corrupt police force, the trigger-finger cop, the drug lord, the recently released from jail ex-con, the protective mother, and a racist society. I give these archetypes 3 Arcs out of 5.