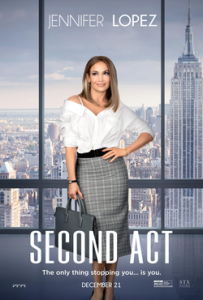 I think we’ve caught Jennifer Lopez in the act of creating a new movie.

We’re introduced to Maya (Jennifer Lopez), a 40ish woman who is a floor-level employee at a national chain grocery store. Her innovative ideas to acquire and retain new customers is greeted with enthusiasm by her boss (Larry Miller) who shares the ideas with corporate bigwigs. When the time comes for a promotion to manager, Maya is passed over because she doesn’t have a college degree. When she complains to her best friend, Joan’s (Leah Remini) son creates a new online ‘persona’ for Maya replete with Harvard resume and Himalayan Facebook pictures.

Maya gets hired by a large New York cosmetics company that thinks she is a Harvard grad with incredibly experience in the industry. She goes along with the charade and is asked to create a new organic skin care product. Maya and her team are competing with another internal team to develop the best product, but a jealous colleague is suspicious of her credentials and begins to check out the veracity of her resume.

Scott, this film’s trailer promised us a movie about a woman of a certain age fighting back against a corporate structure that dismisses a woman because she doesn’t have a degree. It reminds me of the premise of 1988’s Working Girl. However, this movie is selling anti-intellectualism in the sense that it is a battle between street smarts and ivory tower dismissiveness.

I find this premise offensive. While it’s true that you don’t have to have a college degree to be smart, there are plenty of avenues for people to achieve a college degree if they want one. Not that it’s easy or inexpensive. But the idea that somehow Maya is deserving of a promotion despite not having a college degree – just because – is anti-intellectualism at it’s finest. If you compare to Working Girl – Melanie Griffith’s character had a college degree, she was not taken seriously because she was a woman working her way up through the secretarial pool – quite a different premise.

But in the end, education is not the premise of this story. It’s how the studio (STX Films) sold the movie to the masses. It is, instead, a story about being true to oneself and being honest about who you are. Ultimately, it turns out that Maya is hired by Anderson Clarke (Treat Williams) because he discovered that Maya was actually the biological mother of his adopted daughter Zoe (Vanessa Hudgens). It was his goal to reunite the women after Zoe’s mother had passed away. AND, Maya was dating everyman Trey (Milo Ventimiglia) who wanted to marry her. But she hadn’t revealed that she had given Zoe up for adoption, so he didn’t trust her.

This is a confusing mess of a movie that could not find it’s center. It gave us a promise of Maya finding her way in big business despite her lack of education, but ultimately was a story about being honest and true to yourself. If only the producers and distributors of this film had followed this advice and been honest with us about its message, we might all have enjoyed it better.

Greg, I share some of your concerns about Second Act. First, let’s acknowledge that there are a number of good things going for this film. There are fine, likable heroic characters, a couple of worthy villains, and some amusing secondary characters. Not to mention some good comedic scenes and situations that are grin-worthy. These elements ought to make Second Act a movie worth watching. And if you’re a JLo fan, it probably is a film worth viewing because she shows off her acting chops and she does a more than commendable job in her role here. My problem is that the story doesn’t quite add up and, in fact, feels contrived from the start.

Here’s the crux of the issue: Our hero Maya is a person of integrity and superb common sense who would never fall for the fraudulent role thrust upon her at the outset by the brilliant hacker teenage son of her friend. If we are to believe that Maya is as smart as she is, and has as much character and integrity as she appears to have, then there isn’t an ounce of realism in her decision to play along with the charade for a few months. She has to know that she’s going to get caught, and the more things spiral out of control for her, the less believable it is that she continues to live a terrible lie. When she finally does come out and tell the truth, it’s done in the contrived, time-honored Hollywood way – before an online audience of millions of people. Ughh. Sorry, not in a million years.

Having criticized the basic premise of the story, I have to acknowledge some good elements of classic hero mythology that still resonate with us in modern times. The themes of discovering one’s true identity and realizing one’s true potential are powerful archetypal motives in storytelling throughout the ages. We’re reminded that’s one’s true worth is not defined by superficial titles or degrees, but by one’s accomplishments and inner qualities. Maya’s story reminds us of the power of the underdog and the power of being one’s authentic self. It’s too bad that these wonderful time-honored themes are not packaged within a better, more believable story.

Second Act is perhaps Jennifer Lopez’s entry into her second act as producer of films. Sadly, this film comes off more as a made-for-tv or Lifetime movie (notice that all the supporting players come from a television sitcom background). While it was well-acted and the script was decent, the entire premise was misleading and ultimately was poorly delivered. I give Second Act 2 out of 5 Reels.

I agree with you, Scott, that Maya is a good heroic character, albeit poorly drawn. She is dealing with difficult realities of both adoption and education. She starts out being dishonest about who she is. And when she comes clean, she pays the price of her deception. But, also, in coming clean, she reaps the rewards of honesty. I give Maya 3 out of 5 Heroes.

This year, we’re rating the message of the story. I’m puzzled by the meaning of this film. It is attempting so many different themes at once (adoption, education, honesty, friendship, relationships) that I found it hard to tweeze out the point this film is trying to make. I’m going to settle on “being true to yourself.” I give Maya 3 out of 5 Message points – despite the fact that the film was not true to itself on selling us a movie about anti-intellectualism.

Greg, as I’ve mentioned, Second Act is no doubt an enjoyable movie for fans of Jennifer Lopez, whose charisma and intelligence are palpable on the big screen. But for fans of good movie-making, this film falls short. The entire premise of the story – that an intelligent woman of good character would live a Big Lie when getting caught is inevitable – is terribly flawed. So despite all the heartwarming elements, good characters, and some good scenes, too, we’re left with a premise that simply doesn’t work. I give Second Act 2 Reels out of 5.

There is indeed a reasonably good hero’s journey for our protagonist Maya. When hired under fraudulent circumstances at the big company, she enters into the dangerous and unfamiliar world. She gets help from a few co-workers, discovers her true identity, and becomes transformed into the kind of person who opens up her own business under legitimate means. I give Maya 3 Hero points out of 5.

We’ve gone over the message of the film, which is the importance of being your true self rather than pretending to be someone you’re not. It’s a time-honored theme seen in countless fairy tales and mythological stories. Betraying one’s true self always, always leads to problems. The message here is a good one but it’s unfortunately delivered in an unconvincing way here. I award the message 3 Message points out of 5.