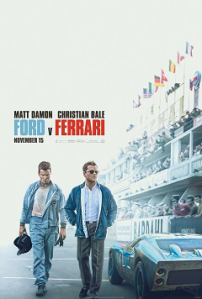 Greg, we have a couple of F-words here. Should we be offended?

Only if you think cars are evil… well considering the current “climate” maybe we should. Let’s recap and see…

The year is 1963. We meet Lee Iaccoca (Jon Bernthal), a Ford executive, who convinces Henry Ford II (Tracy Letts) that the best way to attract baby boomer customers is to focus on fast racing vehicles. Iaccoca advises that Ford to purchase Ferrari, a company with a great track record in winning the 24 Hours of Le Mans race. But when Iaccoca pitches the deal to Ferrari, he is rebuffed and insulted. Henry Ford wants revenge and gives Iacocca carte blanche to build a car that will defeat Ferrari at the next Le Mans.

Iaccoca enlists the aid of former race car driver and master car-builder Carroll Shelby to build a car and win the race in 90 days. Shelby turns to his masterful, though erratic, race card driver Ken Miles for help. Miles laughs at Shelby but agrees. They then embark on a journey to win Le Mans while being undermined by the villainous Leo Beebe (Josh Lucas) who was embarrassed by Iaccoca’s project.

Greg, I’m not a race-car fan and have never shown any interest in NASCAR or Formula One racing at all. Yet I absolutely loved Ford v Ferrari, a movie that isn’t so much about racing as it is about heroic levels of passion, hard work, intuition, competitive spirit, redemption, perseverance, and doing the right thing. The characters in this movie are a truly unforgettable ensemble. Ken Miles, especially, is an astounding and outlandish movie character, and Christian Bale deserves an Oscar for his riveting portrayal of Miles’s eccentricity, feistiness, and relentlessness.

But here’s what really makes Ford v Ferrari so unique, from a heroism perspective. As viewers, we find ourselves rooting for the race team of Miles and Shelby, yet we also know that they work for the unsavory Ford Motor Company ownership team of Henry Ford II and Leo Beebe. Ford is a ruthless racist and Beebe is his petty, underhanded henchman. So I really was torn. I wanted Miles to win but that of course would mean that those two scoundrel fat-cats will win, too. Fortunately, it became easier for me to root for Miles when it became clear that the Ferrari team he was competing against were also headed by a bunch of dislikeable miscreants.

Here’s another thing I loved about Miles. Even when Beebe screwed him out of winning the Le Mans trophy, Miles took it on the chin with classiness, grace, and aplomb. He knew he had won and no one could deny him that satisfaction, even if the racing world officially didn’t acknowledge it. Heroes do the right thing even when no one is watching. It isn’t fame, riches, or positive reinforcement that drives the hero. It is doing what needs to be done, regardless of the outcome. Ken Miles embodied this principle. And to make his heroism even greater, Miles dies tragically shortly after his Le Mans “victory” while test-driving a car. My own research has shown that we tend to deify dead heroes, and Miles’ death seals the deal on his superb heroism.

Scott, I heartily agree. FvF does what every sports film must do – it must not only tell the authentic story of the competition, but deliver a personal story that non-sports fans will relate to. Much like 2013’s Rush, we have two very different personalities in Shelby and Miles who eventually come together. It’s clear that Beebe is thrown in the mix to be a convenient villain for our heroes to overcome. But by the end of the story we want our buddy heroes to not only win, but to be friends at the end. And we’re not disappointed.

I want to think of Shelby and Miles as one hero with two heads. They organically need each other. One cannot succeed without the other. It is Shelby who risks everything by betting Ford that he can win the next Le Mans, but only if he’s allowed to do it his way (including having Miles at the wheel) without interference from Beebe. Miles himself doesn’t really traverse the challenges that the hero normally does. It’s Shelby who has to slay the dragons. But it’s Miles who undergoes the radical change of being self-centered and ultimately giving away his title for the benefit of the team. Individually, neither has a complete hero’s journey – but combined, they hit all the turning points of Campbell’s pattern.

Ford v Ferrari is a terrific movie with rich layers of heroism and villainy. Christian Bale delivers an impressive performance as the quirky, mega-talented Ken Miles and deserves Oscar consideration. You know it’s a good movie when it runs two and a half hours yet feels like an hour at most. Ford v Ferrari is one of the best movies of 2019 and I award it 4 Reels out of 5.

The heroism here is powerful and it is shared by the heroic duo of Shelby and Miles. I hadn’t thought of them as 2 heads on the same hero, but that’s not a bad conceptualization, Greg. Shelby fiercely and cleverly takes steps to ensure that Miles is behind the wheel of Ford’s GT 40 at Le Mans. Miles, meanwhile, has the physical skills and mental agility to design, diagnose, and drive a race-car like no one else on the planet. It was fun watching their friendship and professional relationship grow and evolve. These heroes are a dynamic due and deserve 4 Hero points out of 5.

The message of the movie pretty clearly points to the importance of conviction in attaining our heroic goals. Shelby and Miles are presented with setback after setback yet find ways to overcome Ford’s shortsided leadership and Beebe’s moral turpitude. And conviction alone isn’t enough. Heroes need resourcefulness, cleverness, and help from others. I award these messages 4 Message points out of 5.

Ford v Ferrari is an enjoyable ride through an important turning point in automotive history. It could just as easily been about Lee Iaccoca who is credited with saving Ford motors through the revitalization of the Ford line and the Mustang in particular. But focusing on the race and the journey to win the race – and beating the well-known leader in the industry – presents a far more exciting event. I give FvF 4 out of 5 Reels.

As we discussed, the journey of both Shelby and Miles makes for a complete hero’s journey.  I give them 4 out of 5 Heroes. And the message that good old American ingenuity, grit, faithfulness to friends, and bucking establishment leads to success — well it’s a tried and true Hollywood trope that I can give 3 out of 5 Message points.