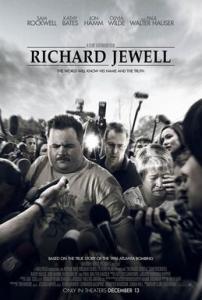 Well, Greg, Clint Eastwood is at it again. This time he’s made a movie about jewels.

In a sort of right-wing response to liberal Hollywood’s Bombshell, Eastwood spins his own version of how the FBI is corrupt to the core. Let’s recap:

We meet Richard Jewell (Paul Walter Hauser), who is employed in a low-level position at a law firm. He befriends one of the lawyers, Watson Bryant (Sam Rockwell). Jewell leaves the job to pursue a career in law enforcement, starting with a job as a security guard at Piedmont College. He is fired from that position for being too overzealous in enforcing drinking and disorderly rules on campus. Jewell then is employed as a security guard overseeing the 1996 Atlanta Olympic games.

One day during the games, Jewell finds a suspicious backpack and alerts the police. The backpack does indeed contain explosives. Jewell and his team get people to move away from the danger, but not enough to prevent a couple fatalities and many injuries. When word gets out in the media, Jewell is hailed as a hero. But when an overzealous reporter Kathy Scruggs (Olivia Wilde) sleeps with underzealous FBI agent Tom Shaw (Jon Hamm), she reports that Jewell is the FBI’s lead suspect. Now the tale turns to how old friend/lawyer Bryant tries to keep hapless/super-patriotic Jewell from going to jail.

Greg, Clint Eastwood continues to defy the aging process. With Richard Jewell, he has crafted a movie that beautifully illuminates how people’s thirst for heroes, and even deeper thirst for villains, can lead to horrible consequences. Jewell’s discovery of the pipe bomb first hurls him into the hero spotlight, making him the toast of the town. But a terrible Dean at Piedmont College of all places decides that he didn’t like Jewell’s work history there and telephones the FBI with a “tip” that Jewell is erratic and fanatical. The media seizes on the story and Jewell’s reputation does a 180. He’s gone from Zero to Hero to Nero.

I’m going to have to give a shameless plug for my latest book with George Goethals entitled, The Romance of Heroism. In this book, we discuss how people’s deep need for heroism causes them to become highly sensitized to see and reward heroes. Even more insidious, though, is people’s longing for villains to hate. Human beings tend to have a hypervigilance for scapegoating that may run even deeper than their need for heroes. There is a powerful longing to “connect the dots” in situations where there is a high degree of uncertainty about whether heroism or villainy exists. Jewell is a victim of this human need to resolve uncertainty.

It turns out that Jewell fit pieces of a profile of the stereotypical “lone gunman”, the false hero who creates a disaster that he himself can get credit for resolving. At first, Jewell is “heroified” for locating the bomb and saving people from its destructive effects. But the FBI and the media were so hungry for a villain to blame that they latched onto whatever scant evidence they could find to portray Jewell as the evil mastermind. Clint Eastwood does a superb job of illuminating the psychological and sociological processes at work in transforming people’s opinions of Jewell.

On the flip side, Scott, is the fact that this film comes out at a time when we have a President of the United States who is casting doubt on the veracity of the FBI and the media. Eastwood is a well-known conservative who has used his powerful position to tell stories that feed that narrative. Such is the case in Richard Jewell. Eastwood concocts events that make the FBI look both incompetent and (quite literally) in bed with the press.

One controversial scene involves the reporter Kathy Scruggs and FBI agent Tom Shaw. It appears that she trades sex for information. And further scenes in the film imply that she rose to her position “feet first” – that is to say, by trading sex for promotions. In the modern age of #MeToo, this goes too far. I find it irresponsible that Eastwood might make such an implication in a major motion picture.

There are other right-wing moments in the film. There’s a point where FBI agent Shaw is giving a monologue inside the FBI building in Atlanta with the backdrop of the Confederate flag. This is quite a statement during a time when southern legislatures are either removing Confederate flags, or introducing legislature to do so.

Richard Jewell proves once again that in the case of Clint Eastwood, age is just a number. Eastwood skillfully weaves together the tragic story of Richard Jewell, a big man with an even bigger heart who saved many lives during the Atlanta Olympics bombing. This film does a masterful job of illustrating the human need to seek out villains at all costs, even at the expense of the truth. This story needed to be told and I’m happy that this movie does justice to the terrifying ordeals of Jewell and his family. I award Richard Jewell 4 Reels out of 5.

Jewell certainly goes on both a hero’s journey and a false-villain’s journey here. Greg and I have argued before that many heroes start out as villains (e.g., Martin Luther King, Jr.) before their heroism is recognized by the majority of people. In Jewell’s case, he starts out as a hero before becoming a villain. The abuse he took required him and his mother to develop resilience, courage, and grit. The truth eventually does set him free, but the stress took a toll on his physical health and may explain his early demise at the age of 44. I give Jewell’s hero journey 4 Hero points out of 5.

There seem to be several viable messages to this story. One is that all of us need to be true to our values and not give a rat’s behind about what people think of us. Another possible message is that no good deed goes unpunished. Still another message is that the general public can easily be duped and manipulated by our government and by the media. It should frighten us all that our public servants and journalists can behave so irresponsibly. I give these messages 4 Message points out of 5.

Richard Jewell is too political for my tastes. Still, I found the film to be very enjoyable and informative. The lead character, Jewell, is clearly not very bright and a mama’s boy. He does appear to want to be in law enforcement to compensate for a low self image and receive the praise he desires from his mother. The classic trope of the “Orwellian Government” is played well here. The performances by Hauser, Wilde, and Hamm are excellent. And, despite his propaganda, Eastwood shows his directorial mastery again. I give this film 3 out of 5 Reels.

Jewell is a sort of hapless hero here. He displays an act of heroism by saving lives through the detection of the bomb. Then he survives the media and governmental attacks through the help of a beneficent mentor in his lawyer. I give these characters 3 out of 5 Heroes.