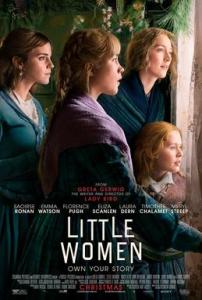 Scott, I understand it is no longer PC to call some people midgets. So, is that the reason for this movie’s title?

Shirley you jest, my dear Gregger. Let’s recap this story of Little Women.

We’re introduced to Jo March (Saoirse Ronan), a young and struggling writer in NYC during the time of the American Civil War. She’s trying to sell her stories but the publisher wants traditional action/adventure and romance (with appropriate happily ever afters). Her professor friend tells her that her writing is … not so good and she needs to be more authentic. Then she gets a telegram that her sister, Beth is ill and Jo is needed at home.

Through the use of flashbacks, we learn our Jo and her sisters were raised in semi-poverty by their mother. Their father is away fighting in the war. At a dance party, Jo meets a young man named Lawrie (Timothée Chalamet) who is the grandson of a neighbor. Laurie is smitten with her but Jo keeps her distance. Meanwhile, out of spite, her sister Amy (Florence Pugh) burns Jo’s book manuscript. All is forgiven when Amy nearly dies while falling through thin ice.

Scott, you know that I don’t care for period pieces like, for example, Jane Austen’s work (this movie is based on Louisa May Alcott’s novel). Stories of women in male-dominated times are usually about whether or not the damsel can trick a man into marrying her. But Little Women is quite a different story. In each of the four March daughters we have different paths for women in the Civil War era. Jo is the most forward-thinking of the four and is blazing a trail for women in publishing. Her sister, Meg, represents a woman who marries for love – not money. Sister Amy is the beautiful one who is destined to marry money. And Beth is the innocent destined to … well to die young.

There are few movies I’d see more than once. The Matrix in particular I’ve seen dozens of times. But I would watch Little Women over and over. The performances are just amazing. Each of the woman playing the March daughters effortlessly portray their characters first as children then again as young women on the cusp of adulthood. As children they are energetic, optimistic, and wildly creative. As they get older, they face the harsh realities of being adults.

Jo is the central character and the character through whose eyes we see the majority of the events in the story. Writer-director Greta Gerwig rearranges the original story using flashbacks from 1868 to 1861 – between the time of the girls’ as adults and as children. And it is quite effective. She successfully creates two parallel stories of the girls’ coming of age and indoctrination into adult life. The presentation of Beth’s contracting scarlet fever as a youth and then dying from its complications as a young adult made for an incredibly moving climax. Rarely does an adaptation present better than the original, but I argue, Gerwig succeeds.

There are four parallel stories here and so, a hero’s journey for each as well. Jo fights for her independence and nearly gives in to societal norms before rebounding and winning her fight. In an entertaining twist, her publisher requires the in-the-story version of Little Women to end with “Jo” marrying the dashing young professor. So she agrees, but we wonder if we’re watching the fantasy story that Jo sold, or if Jo really did marry the dashing professor.

Greg, Louisa May Alcott’s classic novel about the March family has hit the Big Screen. While this isn’t my favorite genre, I do occasionally enjoy reading and watching Jane Austen movies. At first I thought that Little Women seemed like it could have been written by Austen if she had lived in America during the Civil War. But I recognize your distinctions, Greg. These little women are independent and uncompromising. We do see some familiar Austen-esque themes regarding how women struggle to navigate their limited role in a brutally patriarchal society. Jo March is told explicitly by her publisher that a woman character in her novel must either marry or die. He wasn’t kidding.

This movie works on so many levels and only fails to work on one. Let’s first focus on the positive – there are several terrific performances here, most notably by all the actors who play the March daughters, by Laura Dern as the extraordinary mother, and by Tim Chalamet who plays Laurie. These performances breathe life into the script and bring a vibrant humanization to a 19th century world that is, in the words of Thomas Hobbes, nasty, brutish, and short. The story is a celebration of life, a shining testament to the human spirit when that spirit is the target of repeated and relentless societal debasement.

The area in which the movie fails is with its irritating time jumps from one point in the girls’ lives to another. There was no functional or stylistic reason for these flashbacks and flash-forwards. They were simply there to get in the way of telling a cohesive, coherent story. I can forgive the filmmakers this one sin and appreciate the mostly good delivery of two-hours of solid, heartwarming entertainment.

Little Women is a triumph of movie-making. It can be very difficult to bring a time-worn classic to life in modern times. Gwen Gerwig succeeds in spades. Between her deft direction and writing, and simply amazing performances from all the key players, this version of Little Women cannot be improved upon. I give it a full 5 out of 5 Reels.

Jo as the main hero travels a complete hero’s journey. The story is told very much with Jo as the hero and her three sisters as sidekicks. But still, this is quite the ensemble cast. All the March women undergo transformations and each has an ending uniquely her own. For my writer-friends, the scenes of Jo dumping her soul onto the written page (and ambidextrously switching  between hands) will resonate strongly. I give these Little Women 5 out of 5 Heroes.

The message here is to “be true to yourself.” Even now, in the #MeToo era, it’s hard for a woman to live by that credo. Jo demonstrates that even in the most unfair times, it can be possible to forge new paths for ourselves, and those who follow. I give this film 5 out of 5 Message points.

Little Women is a highly entertaining look at what life may have been like for mid-19th-century northern families of modest means. Like you, Greg, I was struck by the character of these young women and their mother, all of whom showed great intelligence, compassion, and integrity during stressful times for themselves and for the nation. I was not as enamored with the story as you were, Greg, and for that reason I can only award the film 3 Reels out of 5.

I also enjoyed how Louisa May Alcott gave each of the little women a different hero’s journey to traverse. These hero journeys yield fun and surprising outcomes. Who, for example, is Lawrie going to marry? The fact that each of the March daughters undergo their own unique hero journeys is a testament to strong writing and to strong acting. I give this ensemble 4 Hero points out of 5.

There seem to be several messages that spring from Little Women. First, there is the message of resilience and grit. The March women persevere no matter the obstacles handed them. Jo March, in particular, will not marry out of societal obligation. She waits for true love. Another message is the heroic message of giving to others who are less fortunate. We see that from the character of Mr. Laurence who donates a piano to Beth, and from Mrs. March who teaches her children to give to the desperately poor family in their community. Finally, there is the message of working to advance society. Jo March and her sisters fight tooth and nail to challenge gender roles and to carve out careers as writers, teachers, thinkers, and providers. I give these inspiring messages 5 Message points out of 5.