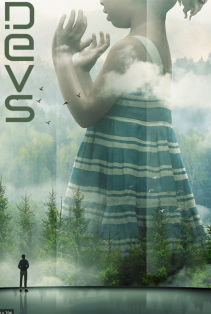 Greg, Alex Garland’s new project appears to be about “Development” in the world of computer coding. Are you ready to review Devs?

The miniseries is all about determinism… so I guess I have no choice. Let’s recap.

We meet a young computer coder named Sergei (Karl Glusman), who lives with his girlfriend Lily (Sonoya Mizuno) in San Francisco. Sergei works at a major tech company named Amaya and is now pitching his latest coding project before the big boss, Forest (Nick Offerman). The project involves projecting the exact movements of a simple life form 10 seconds into the future. Forest is impressed enough with Sergei’s accomplishments that he invites Sergei to work at Devs, a top secret development program at Amaya.

It turns out Devs is using quantum computing to look deep into the past. By collecting everything that is known about the present, along with the knowledge that everything is deterministic, it should be possible to reconstruct any event in the past … or the future. Sergei attempts to record the code with his secret-agent watch. Later, Forest, his sidekick wunderkind Katie (Alison Pill), and security henchman Kenton (Zach Grenier) kill Sergei. They fake his self-immolation suicide which causes Lily to seek out the actual cause of his death.

Greg, Devs is the ideal TV mini-series for people to sink their teeth into, for many reasons: (1) It’s both science and science-fiction; (2) it’s brilliant mix of psychology, philosophy, and technology; (3) it tantalizes us with the mysteries of love, life, death, time, and space; and (4) it features a creepy 200-foot tall statue of a pre-school girl, which ordinarily would be cause for alarm until we realize that the girl symbolizes Devs’ paradox of our choices changing everything – and nothing at all.

I have to give Alex Garland tremendous credit for creating a universe, or rather a multiverse, that succeeds on many different levels. There are fabulous characters, specifically Lily and Jamie, whom we care about and who rise to the heroic challenge. Jamie hits the nail on the head in characterizing Lily as someone who doesn’t merely think about boldly taking actions – she takes bold action in situations where 99.9% of humans would not. That approach to life, dear readers, is the central essence of heroism. As her sidekick, Jamie is loyal to the core and uses his gifts to assist Lily on her hero’s journey.

But Devs is much more than a couple of heroes venturing on the mythic journey. It bestows us with an outstanding ensemble cast featuring generationally different Amaya coworkers Lyndon and Stewart; a charismatic, psychopathic villain in head-of-security Kenton; a pair of ethically shady billionaire tech giants in Forest and Katie; and a homeless dude named Pete who somehow worms his way into these people’s lives.

I gotta say that Episode 1 did a brilliant job of captivating me. We meet Sergei, and we like him. He’s got a lot of heroic potential – he’s young, smart, loving, loyal. His girlfriend Lily has these same qualities and they appear to have a great relationship. Amaya’s top secret Devs operation is shrouded in mystery. This element of mystery is a vastly underrated aspect of heroism and villainy. What role does mystery play? It inflames our heroic imagination. It especially ignites our imagination for evil.

Shameless plug time – In our last book, The Romance of Heroism, my co-author George Goethals and I discuss how the ways in which human beings resolve mystery can lead to extreme and biased conclusions about heroism, and especially about villainy. Here’s a brief overview of how this can happen.

The Devs unit at Amaya is mysterious, and even Forest’s instructions to Sergei on this first day at work are mysterious – he’s told to just look at code and he’ll know what to do, eventually. When Sergei loses his lunch in shock after seeing some of the code, the mystery and the potential darkness of Amaya is heightened. Especially when Sergei says, “This changes everything” to which Katie replies, “This changes nothing.” At this point, Greg, I was hooked and pretty much binge-watched all eight episodes of Devs in two days.

I heartily agree, Scott. Much like Alex Garland’s earlier movie Ex Machina, he’s created a world that feels as if it could exist. And, like Ex Machina, we have a crazed genius who is challenging our concepts of reality. Everything about Devs is high-quality. The acting is just amazing – especially Nick Offerman who is best known for his comedic character Ron Swanson from Parks and Recreation. The cinematography is beautiful. The story pacing is excellent as we never get bored. And yet, it’s not as fast-paced as a motion picture. There is a leisurely element to this story as it takes its time to introduce characters and linger on the dramatic moments.

The thrust of this show is about determinism. The premise is that if we know everything about right now, we should be able to both reconstruct the past, and determine the future. This is the basis for quantitative analytics in which mathematicians and computer scientists try to predict the stock markets. This is also the domain of philosophers. Because, if the Big Bang set everything in motion, and cause yields effect, then there is no free will as everything was determined at zero-hour.

The science in the show is on a bit of shaky ground. I’m not sure that quantum computing really has much to say about determinism. The theory of the multiverse is in strong play here which posits that each decision we encounter creates alternate realities where we went down one path or the other. Some quantum mechanics deal with the observation of events (Schrödinger’s cat) and whether we can know the state of the universe at any time (Heisenberg’s Uncertainty principle). Garland takes advantage of these concepts to play with the question: Do we really have free will?

Greg, you are absolutely right about the quality of the production here. The music, in particular, lends a stylish note during key scenes such as Episode 2’s slow-motion fight between Kenton and Anton in the parking garage. And I concur with your praise for Nick Offerman, who strikes just the right balance between brilliance and eccentricity, and between good and evil. I also enjoyed Alison Pill’s striking performance. She shows off her range here, portraying a brilliant scientist named Katie whose emotional control contrasts starkly to her portrayal of a similar scientist in Star Trek: Picard. I love that Katie calls the shots at Amaya as much as, or more than, Forest himself.

Devs is to be commended for having three very strong female lead characters who drive the story forward. The series takes a big chance in casting Sonoya Mizuno as Lily, our primary hero of the story. Mizuno isn’t the most charismatic actor, and yet I’m going out on a limb by saying that she is the perfect person for this part. Let’s face it, Lily is a tech nerd and, realistically, how many tech nerds have the magnetism of a Meryl Streep or a Kate McKinnon? Her low-key approach is matched by that of Jamie, her sidekick and former lover. The inability of these two characters to communicate their thoughts and feelings was sometimes torture for me to watch, but it was also realistic in a less-is-sometimes-more kind of way.

Most of all, Devs succeeds in a mind-blowing way at the level of storytelling, weaving together a tapestry of mathematics, the natural sciences, the social sciences, and the humanities. I enjoyed witnessing the unfolding success of the Devs’ mission, which begins with the development of brief temporal simulations that can accurately expose both past and future. Soon it becomes more than just an exercise in simulations and evolves into an actual portal into our true past and into our seeming exact future. I love how Devs invites us into the philosophical argument about free will versus determinism and gives us data supporting both positions. Mustn’t the true reconciliation of the free will vs. determinism duality reside in its nonduality? Lily’s final actions in the last episode demonstrate the fallibility of taking an all-or-nothing position on this issue.

Episode eight’s Devs/Deus reveal is fabulous, building on the notion that Zuckerberg, Jobs, Gates, and others are self-anointed Messiahs. I should have seen the connection to Deus coming, as references to the god-like self-images of silicon valley executives are peppered throughout the entire series. But I didn’t see it coming and I credit Alex Garland for giving us enough clues without sledgehammering us.

So we’re left wondering whether we’re all living a “real“ life versus existing as computer simulations of ourselves. And as Stuart says, we could be a simulation existing within countless simulations because the Devs supercomputer exists in every multiverse.

Yes, I also found the “Deus” reveal entertaining because Forest says “it’s an inside joke.” Perhaps Garland is winking at us to say “combine this with my other movie – Deus + Ex Machina”.

The other thing I found compelling is that Forest and Lily talk about technologists thinking of themselves as messiahs. I’ll go a step further – they (we) think of themselves as gods. If you consider that a computer programmer starts with nothing, then creates an animated object (a computer application) that exists completely within the realm of the computer or internet, we are breathing life into lifelessness. It can be a very heady experience and I believe makes for a stronger argument for the name “Deus”.

I was very worried this story would go on for several more seasons. I was thrilled that the story concluded in episode eight. So many of these streaming series go on for years, stretching the story lines to keep viewers coming back for more – and never completing the arc. “Devs” ends on just the right note: Lily is special. She can make her own decisions. She is not tied to the norms of the simulation. And in effect, we are all like Lily. If we can break out of the mold that our simulation (society) has cast us in, then we do have a free will. I give Lily 5 Heroes out of 5 and Devs 5 Reels out of 5. I also nominate Devs for our Reel Heroes Hall of Fame.

Overall, I give Devs 5 full Reels out of 5. This miniseries is a masterpiece and is a must-see for anyone who enjoys science, science fiction, psychology, philosophy, and ethics. To be fair, Devs isn’t perfect. One could be critical of Pete’s identity as a Russian agent being a little too obvious. We know that Pete isn’t really a homeless man, and so the “big reveal” at the end is hardly a big reveal. A second criticism centers on why Lily and Jamie returned to her apartment after her escape from the mental institution. They had to know that Kenton would likely hunt them down and kill them. Jamie in particular, who was terrorized and tortured earlier by Kenton, should have been extremely reluctant to sit in Lily’s apartment waiting to be Kentonized.

Finally, I’m still not sure why Forest was so adamantly opposed to the multiverse idea. Surely Forest had to know that the multiverse theory, championed correctly by Lyndon, was the surest path toward saving his daughter from enduring her tragic death. Devs does a sublime job of portraying the multiverse perspective in several scenes involving ghostly images of various characters responding in different ways to the same situation — including the key scene involving little Amaya’s death in a car crash.

Our hero Lily traverses the hero’s journey in exemplary fashion. She enlists the aid of a sidekick and uses an avalanche of adversity to transform herself into a courageous, resilient, resourceful hero. I give her 5 Hero points out of 5. For its sustained excellence throughout all eight episodes, I concur with your nomination of Devs to our Reel Heroes Hall of Fame, Gregger.