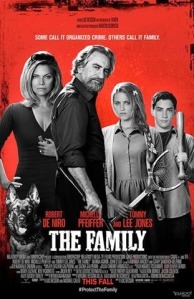 Well you can’t leave ‘em and you can’t kill ‘em – it’s time to review The Family.

Yes, let’s see what Robert De Niro and Tommy Lee Jones are up to in this new release.

Giovanni Manzoni (alias Fred Blake, played by Robert De Niro) is a member of the Italian mob. Or should I say former mob member. He ratted out his friends and family and is now on the run in the FBI’s witness protection program. He is stuck in a small flat in a small town near Normandy, France. He is joined by his lovely wife Maggie (Michelle Pfeiffer), teenaged daughter Belle (Dianna Agron) and younger teenaged son Warren (John D’Leo).

The family apparently has a history of being unable to remain inconspicuous and incognito, and the law enforcement officer in charge of the family’s safety, Robert Stansfield (Tommy Lee Jones) is forced to move them around Europe constantly.  Here in Normandy, the family continues to attract attention much to Stansfield’s dismay. Giovanni pretends to be a writer who is an historical expert about Normandy, Maggie blows up grocery stores, and the two kids are violent thugs at their high school.  Soon the mob discovers their whereabouts and the family is in danger.

Scott I had low expectations for this film and I was delighted with the depth of the characters and richness of the story. After the much maligned De Niro film The Big Wedding earlier this year, I was wondering if he had the chops to pull off a real role. And he did indeed. Giovanni is a textured man who can “describe the entirety of human emotion with one word – f**k.” He is a loving father, a doting husband, and a shrewd negotiator – although most people don’t survive the debate.

Greg, it looks like we had opposite reactions to this movie.  There were no heroes in this movie, unless you count the poor bored-as-hell government officials who are compelled to protect this horrible family from the mob.  De Niro does a nice job of playing the character of Giovanni, but this character has the moral fiber of Al Capone and the peaceful instincts of Charles Manson.  Giovanni says that he never hurt anyone who didn’t deserve it, but apparently nearly everyone deserves it.  In several scenes it is clear that he is ruthless sociopath.  It’s hard to root for a hero like this.

Compounding the problem is that the rest of the family is just as bad.  Maggie doesn’t think twice about blowing up the local grocery store because the shop owner doesn’t like Americans.  The daughter Belle beats people to a pulp with a tennis racquet.  The son sets up a mafia-like organization in his high school.  They are all reprehensible characters, and the entire movie is devoted to showing how another group of reprehensible characters hunts them down.  Do we really care about the well-being of any of these killers?  Are we supposed to root for them to get away with their disturbing violence?  I just couldn’t.

Scott, I’m shocked that you found Vin Diesel’s Riddick heroic and find The Family reprehensible. In each case the Blake family was attacked first. Maggie’s heritage was attacked. Some testosterone-laden boys wanted to have their way with Belle. And the high school bully made mincemeat of Warren. These small-time crooks didn’t know what they were in for. I think your problem with the Blake family is their clear overreaction.

But what shines out in my mind is how this family sticks together through thick and thin. There is a constant showing of affection for one another. There’s a definite caring attitude even between the siblings. They are a true family. Warped, perhaps, but very clearly devoted to each other. There’s a point in the film where the members of the family are separated and it looks as though they will go their separate ways. But when they sense the others are in danger, they work together as a unit. It’s what every mother would want for her family.

Greg, I’m glad you were moved by the mobsters’ tendency to look out for each other.  To me, that didn’t make them good heroes worth admiring.  It made them violent thugs who happen to be loyal to each other.  Riddick was an absolute choir boy compared to the characters in The Family.

But the complete absence of heroes isn’t my only problem with The Family.  The movie never really makes up its mind about what it wants to be.  It starts out as a dark comedy, with all the over-the-top violence being portrayed in a light, whimsical manner.  Then during the second half the movie turns into just plain darkness with no comedic edge to it at all.  I was disappointed with this inconsistency.  Either be a Fargo-like dark comedy, or a serious mob-drama like The Godfather, but don’t try to be intermittently both.

I’m sorry you didn’t see the comedy in a neighborhood picnic where the Blakes entertain the local yokels with a true American barbecue. They are in great form controlling every member of the town with their finely honed skills of manipulation. I loved the flash-frames where we get inside Giovanni’s head and see what he’d do to these numbskulls if he weren’t on the lamb. His restraint is itself heroic.

At its heart, this film is a look behind such films as The Godfather and Goodfellas. It asks the question “What happens to an old mobster at the end of his career?” Giovanni begins his memoir – a book he knows will never see the light of day. But it gives us a look into what makes this loving man a hard-nosed killer. For him there is no contradiction between a tender moment with his wife and dragging the local corporate stooge behind his SUV.

For me, there isn’t a single redeeming thing to see in The Family.  There is no character transformation at all.  All of the main characters grew up in horrid violence and will live their lives that way, no matter how much Tommy Lee Jones’ character implores them to change their ways.  I held out some hope that the two children would somehow evolve into decent people, and maybe one can envision that their lives will change for the better at the end of this movie.  But I doubt it.  They are part of the mob family for life, in all likelihood.

The Family is a dark movie about senselessly violent people trying to avoid being killed by other senselessly violent people.  If you like seeing human beings being pulverized by baseball bats, then by all means go see this movie.  But if you want to see a good story about characters who grow and evolve in meaningful ways, then stay away from The Family.  I give it 1 Reel out of 5 and 1 Hero out of 5.

Geez, Scott. Don’t hold back, tell us what you really think! I found De Niro’s portrayal of a man at the end of his useful life profound. And it’s a story of how a particular way of life is ending. The mob in this film is dying from the inside out. The world is changing around them. I think I’ll go out on a limb and predict Oscar® nominations for The Family.

If you want to see the elements of deep family devotion in the face of ingrained immoral behavior, then I think you’ll enjoy The Family. While our heroes don’t seem to learn any lessons, they do represent a classic family hierarchy. I found the violence to be on the verge of slapstick as it was always an over-the-top reaction to attacks on the family. I recommend this film and give it 4 Reels out of 5. I have to relent to Scott’s complaint that there isn’t much of a hero’s journey here. But that’s because our hero is at the end of his journey. I give The Family 3 out of 5 Heroes.