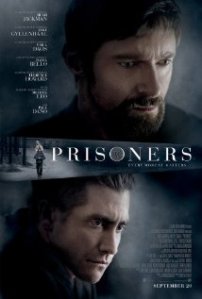 Greg, it looks like Hugh Jackman has temporarily discarded his Wolverine costume just long enough to take on a new role as a desperate father.

Yes he has and he’s pretty convincing in the role.

Prisoners opens with two families sharing a Thanksgiving dinner together. We meet Keller and Grace Dover (Hugh Jackman and Maria Bello) along with their teenage son Ralph (Dylan Minnette) and their six-year-old daughter Anna (Erin Gerasimovich).  And we also meet Franklin and Nancy Birth (Terrence Howard and Viola Davis) and their young daughter Joy (Kyla Drew Simmons).  After their dinner, the families discover that the two young girls are missing. Ralph remembers that the girls had earlier been interested in playing on an RV parked near their home, and soon the police, led by Detective Loki (Jake Gyllenhaal) focus their search on the RV and its owners.

Loki finds the RV and its driver is Alex (Paul Dano) who is a full grown adult but has the mental capacity of a 10-year-old. He is taken into custody but offers no clue as to the whereabouts of the girls. Also, there is no evidence of the girls in the RV. The police let him go. But Keller Dover is not convinced that Alex is ignorant of the girls’ location and abducts the man. Together with his friend Franklin he hides the man in an abandoned home and beats him mercilessly trying to get some clue about where to find his daughter.

I’ll cut right to the chase. Prisoners is one of the best movies of the year. The film grabbed my attention from the opening minute and held it in earnest for 2 and a half hours. Prisoners is the most compelling movie I’ve seen since The Girl With the Dragon Tattoo which came out in 2011.

What explains the excellence of Prisoners?  For one thing, it’s riveting. We have a powerful storyline combined with the emotional anguish associated with innocent children gone missing. We witness the parallel hero journeys of two strong characters in Keller and Loki, each driven by the same goal of finding the missing girls alive yet they find themselves locking horns repeatedly. There are strong performances from the entire cast and some outstanding direction, too.

I have to agree. I was leary of a 150-minute running time, but every minute is put to good use. Detective Loki is not just dedicated, but obsessed with finding the girls. He hasn’t lost a case yet and he doesn’t expect to lose this one.  Despite Gyllenhaal’s cool exterior, his Loki is focused and intense.

There is also a time limit. Keller keeps reminding Loki that children that aren’t found after 7 days are rarely found alive, if they are found at all. And the days tick by with both men approaching the search in their own fashion. Loki is methodical. We get the sense that his every waking moment is focused on solving this case. We are drawn into Loki’s world and his intensity is palpable.

Whereas Loki is caught between his incompetent boss and Keller’s defiance, Keller is torn between his Christian faith and his desire to do whatever it takes to get Alex to talk.  This makes for a terrific hero story, as Keller’s intensity and devotion to his daughter’s safety compromise his better judgment.  Or so it seems.  Keller cannot find it in himself to live up to his own strong Christian belief in forgiveness, and yet in an interesting twist, Keller’s inability to forgive Alex leads him toward discovering the truth.

One of many things I liked about Prisoners is the way it invites us to ponder interesting issues like forgiveness.  Another theme is the idea of “readiness” for life’s obstacles. Keller believes he is physically and emotionally ready for any catastrophe, and he even drills this principle to his children, but it’s painfully clear that Keller isn’t ready at all for what unfolds in this movie. We learn that no one can be ready for every possible setback that life throws at us.

The title of the movie is misleading. We’re attracted to the movie because we think that the story is about two little girls who are prisoners. But in fact, the prisoners in this film are Loki and Keller. They’re both bound to their ideals and constrained by their beliefs. Loki believes that if he follows the clues and plays within the rules then he will solve the case. And he is trapped in that belief system. When things don’t work the way he thinks they should, he begins to make mistakes. But working outside the box means the system doesn’t work – and he needs it to work.

Keller believes that protecting his family is his sole responsibility. And it’s clear that he’s not able to protect his family from every eventuality. If he cannot find his daughter he will have to live with the fact that he has failed. And this is not something he can live with. This forces him to work outside the system and find his daughter by any means necessary.

Well said, Greg. Prisoners is one of the year’s best films and contains more memorable scenes than the previous dozen movies combined which we’ve reviewed. This film is a great reminder of why I love movies and how a good story can leave its audience thinking and feeling in meaningful ways. I give Prisoners 5 Reels out of 5.

The parallel hero stories here were also inspired and moving. Keller and Loki are most certainly not your Hollywood-stereotypical father and cop characters, nor were their journeys predictable. They were two highly memorable characters who travel the hero arc in surprising and powerful ways. There is absolutely no chance at all that their searing experiences could fail to transform them.  I give them 5 Heroes out of 5.

I agree, this is one of the best films of the year so far. I have to say that I didn’t find it as rewarding as you did. I was held captive by the plot and the performances. But I wasn’t satisfied that either man impacted the other. At the end of the day they were both vindicated in their own way of thinking. I don’t think Detective Loki was much changed at the end of the film compared to the beginning. In fact almost nobody was much different at the end of the film. Keller was tortured by the fact that he couldn’t keep his family safe from every evil thing and he became something that was far from heroic.

I award Prisoners 4 Reels out of 5 for an entrancing psychological thriller and 4 out of 5 Heroes for compelling characters that kept me watching. To get to a higher rating I would want to see some interaction between Keller and Loki that would catalyze them to change in some more compelling way.