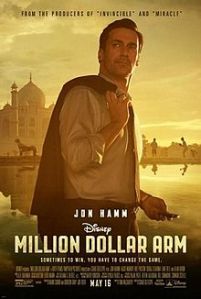 Greg, strangely enough, it looks like Disney has made a movie about the arms race.

We meet JB Bernstein (Jon Hamm), a sports agent who is struggling to attract clients and is on the brink of financial collapse. He concocts an idea to create a reality show that promises to reap fame and fortune. The idea involves going to India to recruit cricket players with the raw skills to become professional baseball pitchers in the United States. J.B. obtains financial backing from businessman Mr. Chang (Tzi Ma), who gives J.B.’s agency only one year to complete the task.

In India JB discovers things don’t work as they do in the US. He has to grease the skids with backdoor deals. He meets an enterprising young man in Amit (Pitobash) who loves baseball and offers to work for JB for free. JB scours the countryside looking for players but finds only two: Rinku (Suraj Sharma) and Dinesh (Madhur Mittal). Ironically, neither boy is a cricket fan.

JB brings the boys home to America and convinces the USC pitching coach to train them. JB is focused on the deal and neglects to give the boys the attention they need. Tenant and neighbor Brenda (Lake Bell) urges him to be more sympathetic to the two boys who are far from home and only aim to please.

Based on a true story, Million Dollar Arm is a pleasant Disney tale that delivers two different underdog stories within the same movie. The underdogs are JB, a struggling sports agent, and two Indian baseball prospects who are not given much chance to succeed at the game. All these underdogs prevail, of course, and they do so in a predictable way. Yet somehow the movie charms us with the sweetness and innocence of several key characters.

Greg, this movie works because Disney has spent almost a century perfecting the formula for tugging on audience’s heartstrings. The two Indian baseball prospects are wonderful young men. Yes, they are naive and jittery, but they wear their generous, innocent hearts on their sleeves. JB is a darker character, self-absorbed to a fault, but lurking behind his careless egocentricity we see hints of inherent goodness. The job of the movie is to develop that goodness into its fullness, which it accomplishes nicely.

I agree, Scott. I’m not a baseball fan, so sports movies occasionally leave me in the dust (witness last spring’s Draft Day). But this isn’t so much a story about sports as it is about overcoming our weaknesses.  The young men in the story are honest and eager to please. They see this as an opportunity and also an obligation to reflect positively upon their families back home.

JB is both a hero and a villain in this story. He is the character who is most transformed by the events in the film. But it is his inner demons – those of greed and ambition – that get in the way of seeing the good in people. And it is this missing inner quality that threatens to doom him to failure in his task. Happily, through the intervention of a good woman and the good nature of the young men, JB overcomes his focus on the business of the game and is reminded of what makes baseball fun.

You’re right, Greg. JB doesn’t need an outside villain, as he is his own worst enemy here. JB is mentored by two people in this story. Besides the woman you mention, early in the movie JB’s contact person in India, Vivek (Darshan Jariwala), plants the seeds of JB’s transformation. Vivek tells JB that the two Indian boys represent more than just a great business opportunity; they are first and foremost an important “responsibility.” This wisdom reminds me of Stan Lee’s oft-quoted line, With great power comes great responsibility. It certainly applies to JB, who at first wields his power in selfish and reckless ways before he learns that people come before profit.

I think Million Dollar Arm doesn’t quite hit a home run with its easy-to-digest sports story. It is predictable and unsurprising in many ways. But it has an honesty and good naturedness that makes it an enjoyable movie to watch. I give the film 3 out of 5 Reels.

JB is definitely a man fighting himself in this story. I was happy to see his slow transformation from all-business jerk to understanding jerk. JB gets 3 out of 5 Heroes from me.

There isn’t much of a villain story for us to take home. JB is his own enemy and as such doesn’t have much to overcome. I give him just 2 Villains out of 5.

We’re on the same page, Greg. Million Dollar Arm is formulaic to a fault yet somehow manages to succeed as a worthwhile film due to its charming cast and fulfilling take-home message. There isn’t much new ground covered here, but I enjoyed Million Dollar Arm and recommend it for people who are in the mood for a feel-good movie. Like you, Greg, I award it 3 Reels out of 5.

The hero story is interesting and follows the conventional path of sending our hero JB to India, an unfamiliar place where he is a fish out of water. Several key allies assist him on his mission, and while in India he encounters resistance and also cultivates a love interest. Ironically, she is a woman he Skypes as she lives in America. She ultimately helps JB discover his missing inner quality, which is his sense of humanity. Again, it’s a bit formulaic for a woman to help a man reform himself, but Million Dollar Arm does it in an appealing way. JB deserves 3 solid Heroes out of 5.

The villain, if there is one, is JB himself, or at least it is the dark side of JB’s character. We learn in this movie that heroes find ways to overcome their dark sides, whereas villains are either blind to these sides or cannot summon the conscience to overcome the darkness. Greed is a powerful human force and has destroyed many people, and is thus a worthy adversary here. For this reason I’m willing to award the “villain” 3 out of 5 Villains.