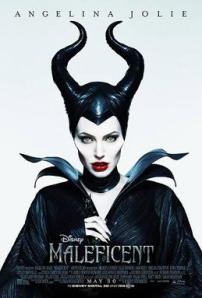 Scott, it looks like Angelina Jolie is back with a Tomb Raider sequel.

We’re introduced to a very young faerie named Maleficent (Angelina Jolie) who lives in the Moors. The faerie world doesn’t get along with the human world so it’s quite a big deal when the young man Stefan (Sharlto Copley) appears to her. They strike up a friendship and eventually fall in love. The problem, though is that Stefan has ambitions to become a higher-up in the king’s court. This causes Stefan to abandon his new love. Over the years Stefan does grow in the king’s graces and he needs to impress the king and be named successor.

To gain the king’s favor, Stefan returns to the Moors and wins Maleficent’s heart again. One night he moves to stab her in her sleep, but he cannot bring himself to do it. Instead, he cuts off her wings and brings them to the king as proof of her death. Maleficent’s disfigurement turns her into a bitter, vengeful witch-like figure. When she discovers that the new King Stefan and his queen have given birth to a daughter named Aurora (Elle Fanning), Maleficent inflicts a curse upon the baby such that Aurora will fall into an endless sleep and can only be revived by a true love’s kiss.

Scott, this is a prequel to the classic Sleeping Beauty story. Maleficent does for Sleeping Beauty what Wicked did for The Wizard of Oz. The story focuses on the evil queen and how she came to be who she is. The production values are amazing. The world of the Moors is colorful and full of interesting creatures.

I found the story to be captivating and moved along at a nice pace. I rarely felt bored as we were carried from scene to scene as the story twisted along this Villain’s Journey. We start out with a young, happy, vibrant Maleficent. Then she is betrayed by her lover. Then she curses the baby Aurora and the story switches to the growth of Aurora. Maleficent also grows during this period. Disney created a beautiful world full of color and life.

I agree, Greg, that this is a fascinating tale. For me, Maleficent is first and foremost a story of a hero who can be misunderstood to be a villain. Beyond its obvious entertainment value, Maleficent highlights the fine line that exists between heroes and villains. Capitalizing on this ambiguity, and even toying with it, is no doubt one of the main goals of the film.

We’re introduced to a sweet young girl, a fairy with impressive wings, who seems by all appearances to be a heroic figure — or at least potentially one. After a man physically brutalizes her, she takes on a villainous persona. Bitterness consumes her and leads her to an act of vengeance that she later regrets. Most importantly, she falls in love with the very person who was the target of her vengeance. This love redeems her. We witness the healing power of love, as our fairy becomes the sweet person she once was. For me, this is a dramatic and powerful hero’s journey.

I was thrilled that we get the full round trip here. Maleficent starts out with all the characteristics a heroic character. She’s smart and happy and she does good deeds for those around her. Despite her physical superiority to other faerie people in the Moors, she’s their advocate and protector. Then once she is betrayed, she turns dark and starts down a path that appears to have no return. She puts up barriers to the Moors that the humans cannot penetrate. For a generation she steeps in her anger and builds a hatred for the humans. She reaches the pinnacle of her villainy when she lashes out at an innocent child. Aurora is cursed to fall into a deep sleep on the day of her 16th birthday.

Then Maleficent starts on the return path to heroism. She observes the child growing up and as she does she comes to love her. It is this love that touches Maleficent and causes her to return to goodness. Ultimately, Maleficent comes to defend Aurora and it is Aurora who saves Maleficent. It is a wonderful tale of a fall from grace and redemption.

We also learn how villains differ from heroes. Maleficent is a character who illustrates beautifully how heroes find ways to redeem themselves, even when they appear to be irreparably damaged. Heroes never let physical or emotional injury define them, at least not in the long run. Heroes transcend difficult circumstances. Villains succumb to them. Maleficent rises above her pain, thereby cementing her heroic status.

I might argue the Maleficent is the anti-villain. She has to have something to catalyze her to turn from villainy back to heroism. If it weren’t for Aurora’s beauty and love, Maleficent would have been lost forever. We’ve seen this catalyst in last weeks’ Million Dollar Arm. In that movie the lead character was going down a dark path until his girlfriend and the young men from India show him a different way. Both these stories remind us how very close a hero is to a villain.

Maleficent is a colorful, suspenseful, and thoughtful examination of the psychology of villainy. I heartily recommend it both for adults and children. Although, personally, I thought some parts were too dark for younger children. I give Maleficent 4 out of 5 Reels.

Maleficent isn’t a great movie but its lead character, Maleficent herself, is one of the most compelling and complex Disney characters ever to appear on the big screen. Angelina Jolie shines in the role and gives Maleficent the depth and nuance needed to portray character’s long, painful, yet ultimately redemptive journey. I’m torn between giving the movie 3 versus 4 Reels but because I enjoyed the layers of this character so much I’m going to award Maleficent 4 out of 5 Reels.

The ambiguity of the heroic status of Maleficent, and the twists and turns that her character experiences, are great fun to behold. I honestly didn’t know whether her turn to darkness was permanent or temporary, and I was delighted to see a character that is redeemed by love. Such a message offers hope to all of humanity. Like you, Greg, I also award Maleficent 4 Heroes out of 5.

The true villain of the story is Stefan, who is slave to his deep desire for power and glory. The only love he knows is the love of conquest and ambition. He’s not a particularly deep or interesting villain, as his role is mainly to flesh out the depth of Maleficent’s character. Because Maleficent herself shows a villainous side and showcases the fine line between heroism and villainy, I give the pairing of Stefan and Maleficent 4 out of 5 Villains.