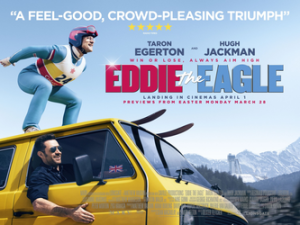 Scott, it’s time to take off on another movie.

Greg, I’m ready for Eddie. Let’s do this.

It’s 1988 and we’re introduced to Eddie Edwards (Taron Egerton) – an awkward man who has grown from a child wanting nothing more than to participate on the British Olympic Team. He has overcome a disability that kept him from running and playing with other children. Now, in his early twenties, Eddie has become an above-average skier with the British team. But they decide they simply don’t want him – he’s not British enough. Not letting anything deter him, he sets his sites on ski jumping. Since Britain hasn’t launched a ski jumping team since the 1920s, the requirements for qualifying are still very low – just a 70-meter jump. He relocates to Germany and self-trains, but nearly kills himself. That’s when he attracts the attention of drunken snow-groomer Bronson Peary (Hugh Jackman).

We learn that Bronson was once an American ski jumping star who squandered his talent and under-achieved. Eddie asks Bronson to coach him but Bronson declines, observing that Eddie lacks the experience and talent necessary to become a world-class ski jumper. Eventually, Bronson is won over by Eddie’s tenacity and work ethic. Bronson begins to train Eddie, who edges closer to his goal of competing in the Calgary Winter Games.

Scott, Eddie the Eagle Is a classic sports success movie with the added bonus that it is based on a true story. We meet the underdog athlete who desires to be the best in his field. In this case, the underdog has already overcome a physical challenge, so we admire his tenacity. But then he raises the stakes on himself to compete in one of the toughest of winter sports.

We’ve seen this kind of pluck in other stories – like The Karate Kid and Creed. In these stories, the hero character is not ready for the challenge of their selected sport. They have to train hard to overcome their underdog status and realize their goal. What’s interesting about Eddie, and the thing I like most, is that Eddie doesn’t play to win – he plays to be the best he can be.

There’s a touching scene where Eddie is riding the elevator to the top of the highest jump and he’s talking with the world record holder, Matti “The Flying Finn” Nykänen. Nykänen says they are alike in that they aren’t competing against each other, but against themselves – to make their personal best. This message is what makes Eddie the Eagle stand alone among sports hero movies.

Yes, this movie is the prototypical underdog story that showcases a lovable guy who doesn’t let any of his many disadvantages deter him from pursuing his dream. Eddie is sweet and innocent, yet also fearless and determined. It is this fearlessness and unwavering resolve that help Eddie attract a primary mentor figure that he needs to accomplish his dream of competing in the Olympics. Bronson is that mentor.

Speaking of which, this movie has more layers of mentoring than I’ve ever seen in a movie. Eddie’s parents are his first mentors, with his mom being the positive nurturer who encourages his dream and his dad serving as a dark, discouraging mentor who belittles the dream. Next, Eddie befriends a woman at the ski jump facility who gives him basic tips about where to go and whom to see on his quest to gain experience. Then there is Bronson, the main mentor, who has his own mentor, whom we’ll call The Grand Mentor. Eddie is also discouraged from competing by rival skiers and coaches, and he is counseled to abandon his dream by his own country’s Olympic committee. And before his final jump, Eddie gets advice from Matti Nykänen. I can’t recall a hero who has to navigate through so many good and bad elders, advisors, and mentors.

You’re right, Scott, In the classic hero’s journey the hero is approached by a mentor who lays down the call to adventure. Almost invariably, the hero refuses the call before ultimately going on his adventure.However here, (and with the other films I mentioned) we see a mentor character who is approached by the hero who asks for help. It is the mentor who initially refuses the call to adventure. I wonder if this is typical of just sports movies, or if there are examples in other genres as well. I think this makes Bronson a Reluctant Mentor.

As with other mentors we’ve reviewed this year, Bronson is a former hero turned mentor. But Bronson is a fallen hero as he was kicked off the ski team due to his drinking, womanizing, and generally bad attitude. Throughout the movie we get glimpses of Bronson’s old coach Warren Sharp (Christopher Walken). Both Eddie and Bronson look to Sharp as an example of good coaching. In the end Sharp gives Bronson his blessing, making Bronson a kind of Redeemed Mentor.

All these layers of mentoring are fascinating. One thing we learn is that while a mentor is given great respect, a grand mentor is revered like a god. When Warren Sharp enters the room, he attracts a kind of solemn silence usually reserved for royalty. If a mentor is like a hero to our hero, then a grand mentor is the hero to the hero’s hero — a multigenerational multiplicative effect that we just don’t see much of in storytelling. I liked it.

One more thing to add about our hero, Eddie: He definitely transforms, as any good hero must if we are to care about him. You could argue that with all these mentors, he should transform, right? But let’s not forget all the dark mentoring in Eddie’s way. This is a hero who believes in himself and clings to his dream no matter what kind of feedback he is given. It’s a great lesson for us all. And he transform in terms of courage, resilience, and physical ability.

Eddie the Eagle Is a surprisingly fun sports drama with a message we don’t often see. I enjoyed watching Eddie grow from a handicapped child to his own champion. We got some wonderful performances from both Taron Egerton and Hugh Jackman. (BTW: How does Hugh Jackman, a big star, end up in these little films?). It’s a period piece that took us back to the eighties in style. I happily reward Eddie the Eagle 4 out of 5 Reels.

Eddie stacks up as a great hero. He’s likable due to his unrelenting enthusiasm, as well as his ability to overcome obstacles. He is a dreamer and idealist. There’s a lot to like about Eddie. In fact, he is such a great guy, that his transformation is a little lackluster. He starts out great and ends up great, too. While he does undergo a physical transformation (one of the five types we mention in our book Reel Heroes and Villains), the internal transformation is lacking. Still, I give Eddie 4 out of 5 Heroes.

Scott, you point out correctly that there are mentors a-plenty in this movie. Although I think identifying the parents as mentors is a bit of a stretch. Generally, you look to mentors who give advice and gifts. While his mother is encouraging, she doesn’t give him advice that will help him be a great ski jumper. She’s more of an ally than a classic mentor. Bronson is interesting for the redeemed mentor character – overcoming his deficiencies as a hero by contributing to the advancement of a new hero. And I award bonus points for introducing us to the Grand Mentor character in Warren Sharp as well. I’m happy to award a full 5 Mentors out of 5.

You’ve nailed these ratings, Greg. This is a movie that’s almost impossible to dislike, unless you’re a total misanthrope. Eddie teaches us to embrace our dreams and pursue them, no matter what the cost and no matter who, or how many, oppose us. What better message is there about how we should all live our lives? I, too, give Eddie the Eagle 4 Reels out of 5.

The hero’s journey follows the classic pattern and gives us a hero who is willing and able to transform himself from a crippled child to a Olympic ski jumper. Eddie not only transforms himself, his story inspires us all to transform ourselves. Best of all, this movie allows us to sink our teeth into a multi-layered mentor cake. It seems that every secondary character is a mentor of some sort, and our main mentor Bronson even experiences “an atonement with the father” — a reconciliation that is usually reserved only for the main hero. Like you, Greg, I also award Eddie 4 solid Heroes out of 5.

With more mentors than you can shake a stick at, how can one not award the maximum rating of 5 Mentors out of 5? This gaggle of mentors is a fascinating and variegated collection that illuminates the importance of social support in the hero’s journey. In developing our model of mentoring in the movies this year, we’ll be referring to Eddie the Eagle quite a bit. And deservedly so.