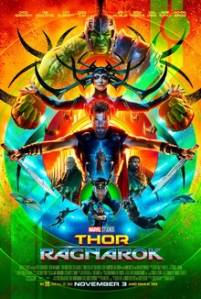 You’ll get hammered by Thor for your disrespect, Greg. Let’s recap.

It looks like Thor has been trapped upside down and is talking to a skeleton for some reason. Meanwhile his brother Loki is pretending to be his father Odin for some reason. The two make friends and go in search of their father who is dying in Norway for some reason. Odin warns the two that their (heretofore unknown) sister is coming back to reign terror and take over their homeworld of Asgard… for some reason.

Odin explains that Hela had once been a vicious conqueror but had been vanquished and erased from history. Sure enough, Odin dies and Hela appears. She easily defeats Thor and jettisons him into space to die. Traveling into the underworld, Hela resurrects her old army and oversized wolf. She also recruits an Asgard named Skurge (Karl Urban) to be her executioner. Meanwhile, Thor appears on a planet of garbage and is captured by Valkyrie Scrapper 142 (Tessa Thompson) who appears ready to sell him into slavery.

Scott, I think I no longer know what makes a good movie. Thor: Ragnarok is about as nonsensical a film as any I’ve ever seen. And yet critics and fans alike give the film rave reviews (93% from critics on Rotten Tomatoes, and 90% from fans). I’ve seen bad movies (like Adam Sandler’s Grown Ups films) that have low scores from critics, but high scores from fans. That makes sense to me – an artist like Sandler knows his audience and delivers. But how in the world critics can give Ragnarok a good review is beyond me.

Here’s my beef: it longs to be Guardians of the Galaxy but has none of the charm and complexity of that film. Nothing in Ragnarok makes sense: We have a purely evil character in Hela. How is it that she can destroy Thor’s hammer? I thought it was indestructible and only could be held by someone of incredible virtue? She has a backstory that comes out of nowhere and her storyline is basically put on the back burner while we follow Thor on Sakaar who has to fight for the Grandmaster (delightfully played by Jeff Goldblum who seems to be keenly aware he’s in a ridiculous movie) against, of all creatures, The Hulk (Mark Ruffalo). How convenient / unlikely is that?

This scenario is clearly designed to pit two Marvel characters against each other in humorous ways. But in the end it begs a bunch of questions about just how super these superheroes are. I mean, is Thor indestructible? He can withstand being bashed against walls and floors. If so, why is he disabled by a little shock of electricity from Scrapper’s device? Isn’t Thor the God of Thunder? Shouldn’t he be able to withstand the shock of, say, lightning. This movie made no sense at all and I didn’t find the situations funny as much as they were contrived.

Greg, you’ve been singing the praises of Marvel films for years now, and I can’t think of a single one that operates in the world of logic, consistency, or reality. They’re all skillfully crafted goofball adventure stories, with pretty much every scene of these films requiring a cavernous suspension of disbelief.

Thor: Ragnarok continues in this tradition and is another storytelling triumph for Marvel. This film showcases the cycle of life, with our hero Thor going through the ordeal of replacing his father on the throne. In the process he even loses his eye in the same way that his father did. As with most Marvel films, this movie has depth and heft to it, gifting audiences with memorable characters and a screenplay offering a perfect blend of intelligence and wit.

Redemption is a key component of heroism and it abounds in this film. Loki is the obvious redeeming figure, but we also see redemption in the rock creature rotting in the Grandmaster’s dungeon, and in Scrapper 142, the Valkyrie who captures Thor but later becomes empowered to reclaim her rightful place in the universe. There is also redemption in the Hulk, who is liberated from the Grandmaster’s fighting arena. In addition, we see satisfying redemption in Skurge, the henchman who turns against Hela and dies saving the citizens of Asgard.

Scott, in my own defense, most of the Marvel films have internal consistency and deep characters that make them worth watching. I didn’t find this to be true in Thor: Ragnarok.

Thor as a hero is his usual self. He’s super powerful and super moral. He is also flawed in that he is still brash and filled with hubris. He seems to mature in this film as he puts his people ahead of himself and takes the throne. He realizes that leadership is a service and not a burden nor a privilege. Different than his earlier incarnations, he is both willing and able to make this transition.

As mentioned, Thor undergoes a deep transformation as he shifts from a selfish, devil-may-care character to a leader. The demise of his sister Hela seems accomplished in a simplistic way. She goes from a ‘hellish’ leader to a bit of ash by the film’s end. It seems the relationship between Thor and Loki, while still tenuous, has also matured into one of mutual respect and cooperation.

I’m glad you mention transformations, Greg. Transformation and redemption go hand-in-hand, and so this film is chock-full of them. In a key scene, Thor and Loki are having a heart-to-heart conversation about how different they turned out, and Thor cuts to the chase: While he (Thor) has changed and grown as a person, Loki has not. Thor even mentions that growth and transformation are what life is all about. Perhaps his little speech had an effect, as Loki later steps up and helps Thor defeat his older sister.

And so we see that Thor serves as Loki’s mentor, thus demonstrating how mentorship is key to transformation. Thor ends up mentoring several people, including Bruce Banner, the Valkyrie, and the rock creature. Odin operates as Thor’s mentor.

Thor: Ragnarok mystifies me as I don’t see the appeal. It’s a loosely tied plot with shallow characters and no point. The only character I found interesting was the Grandmaster played by Jeff Goldblum. I am dumbfounded by how Thor can withstand intense beatings by the Hulk and yet lose his eye to lightning – of which he is the supposed god. I give this film 1 out of 5 Reels.

As far as heroes go, Thor does pretty well. He is the classic superhero which gives him a baseline of points. And he undergoes a transition from fractious child to responsible adult as he takes both the throne and responsibility for his people. I give Thor 3 out of 5 Heroes and 3 out of 5 Deltas.

Thor: Ragnarok is yet another winner for Marvel, the movie studio that has perfected the art of producing fabulously entertaining superhero stories. This film works on every level, from storytelling to character development to production value. Our hero Thor is tested to the limits and is humbled en route to defeating his evil older sister. I’m impressed by the numerous instances of redemption and transformation in a half-dozen characters who are forced by circumstances to respond to the heroic challenges facing them.

This movie is clever and imaginative, easily earning it 4 Reels out of 5. For its emphasis on heroic growth among many of its ensemble of characters, I award Thor: Ragnarok’s heroes a rating of 4 Hero points out of 5. The pervasiveness of redemptive story arcs among these characters also signifies significant character growth and change, and thus I also give this film 4 transformation Deltas out of 5.