Murder on the Orient Express •••• 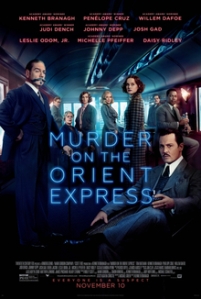 Greg, it looks like Hercule Poirot took the last train to Clarksville.

Stop monkeying around and let’s review Murder on the Orient Express.

In Jerusalem in 1934, the famed detective Hercule Poirot (Kenneth Branagh) is in the process of solving a case. Afterward, he is called on a case in London and must board the Orient Express, slated to leave Istanbul. At first it appears that the train is completely booked but Poirot obtains passage thanks to his friend Bouc (Tom Bateman), who is the director of the Orient Express.

He meets an array of characters, among them gangster Edward Ratchett (Johnny Depp) who tries to enlist Poirot as his personal assistant – looking out for anyone trying to do him harm. Poirot declines pointing out that he chooses his company, and he does not want to be in the company of Ratchett. Later that night, Ratchett is found dead in his room with a dozen knife wounds in his chest. Poirot would rather start his vacation, but the game is afoot!

Greg, Murder on the Orient Express is a stylish re-make of two other films based on Agatha Christie’s iconic 1934 novel by the same name. Viewers may need to be fans of the mystery genre to appreciate this film, as there is a lot of talking between Poirot and the dozen suspects of the crime. These conversations are intelligent and witty, and it was fun watching Poirot struggle to put all the pieces together. Kenneth Branagh deserves kudos for bringing Poirot and his ridiculous mustache to life on the big screen once again.

It helps that this re-make is superbly cast. The assortment of colorful characters include Caroline Hubbard played by Michelle Pfeiffer, Hector MacQueen played by Josh Gad, and Gerhard Hardman played by Willem Dafoe. Depp also steps up his game in portraying the sleazy killer whom everyone wants dead. A prominent non-human character in the film is the beautiful yet foreboding Bulgarian mountain range that supplies the avalanche needed to give Poirot time to solve the case.

I had a good time with this film. Unlike other offerings this year, it was not a slam-bam fest. It was a thoughtful, humorous, and enjoyable two hours. Branagh’s Poirot, though, was a very monotone character – rarely raising his voice or even an eyebrow.

It has been a long time since I read “Murder on the Orient Express” in high school, so I didn’t remember the ending. It turns out that all the suspects took a stab at the villain. I was surprised that Poirot let them all go. I suppose it was his guilt at not responding to Armstrong’s letter that swayed him. I feel it made him just as guilty as the rest. But it’s hard to argue with Agatha Christie. I think she took a risk aligning her hero with killers. Perhaps sensibilities were different in the 1930s. But otherwise, Poirot is the classic “competent” hero.

Greg, I’d say you’ve put your finger on the heroic transformation of Poirot, if you could call it that. Remember, he is portrayed as having an OCD perfectionism that requires him to see the world in black-and-white terms. The circumstances of the murder compel Poirot to re-examine his rigidity and recognize the moral grey area surrounding the murder. Ratchett is a despicable man who got away with either killing or ruining the lives of several good people, and while this fact doesn’t excuse the taking of his life, it certainly does mitigate the immorality of the act. Poirot walks away from this grisly affair with a more nuanced understanding of justice, human nature, and human culpability.

Poirot is Poirot throughout and is the epitome of the “competent” hero. Branagh’s portrayal of Poirot was a bit on the reserved side. While Poirot himself is a reserved character, a few highs and lows would have been appreciated. I give this incarnation of Hercule Poirot 4 out of 5 Heroes.

Transformations are abundant in this film as we watch everyone on the train change from who we thought they were – into who they really were. But no one was particularly changed for the better. I give the perpetrators just 3 out of 5 Deltas.

You’ve summed it up nicely, Gregger. Murder on the Orient Express delivers exactly what fans of mystery movies desire, namely, a smart and charismatic detective and an assortment of colorful suspects who supply a mix of intriguing clues. I agree that a rating of 4 Reels out of 5 is a fair assessment.

The hero’s journey is a bit stunted by the fact that Poirot is a recurring character with limited ability to grow or change from his journey. He also lacks good mentors or a love interest. I give his heroism a rating of 3 Heroes out of 5. Poirot does show a slight transformation toward appreciating moral nuance, and Ratchett transforms from alive to dead. The reality is that this genre of film isn’t about transformation, and so I give these characters 2 Deltas out of 5.