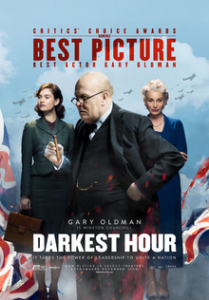 Greg, we just saw film that sheds light on a darkest hour.

It’s the second film this year about the Dunkirk rescue. Let’s recap.

In mid-May of 1940. Prime Minister Neville Chamberlain’s (Ronald Pickup) appeasement policy with Hitler has proven unsuccessful, with German forces now streaming into Belgium, the Netherlands, and France. Winston Churchill (Gary Oldman) has just been appointed the new Prime Minister. He is impatient with his new secretary, Miss Layton (Lily James) and he must have weekly lunches with King George VI (Ben Mendelsohn), who is skeptical of Churchill’s policies.

Churchill is sure that Hitler will not honor any terms of surrender that Brittain may offer. He assembles a cabinet of men who are not entirely friendly to Chamberlain because he wants honest opinions – not yes men. In particular Viscount Halifax (Stephen Dillane) is pushing for an agreement with Hitler. The totality of Britain’s army – some 300,000 men are stuck on the shore of Dunkirk, France – with the German army closing in fast. Chamberlain has to come up with a plan to rescue his men and convert the minds of Parliament before Hitler slaughters his army.

Greg, Darkest Hour is reminiscent of that extraordinary 2012 movie Lincoln that garnered multiple Best Picture awards. Both films focus on remarkable leadership during times of national crisis, and both offer heavy emphasis on dialogue, negotiation, and inner struggle. While I wouldn’t place Darkest Hour in the same stratosphere of excellence as Lincoln, it is an extremely worthy micro-biopic that showcases the talent of its star, Gary Oldman, whose depiction of Churchill’s eccentricity and volatility are right on the mark.

I use the term ‘micro-biopic’ because we are only given a glimpse of a three-week window in the life of Winston Churchill. During these crucial weeks, Chamberlain has been ousted as Prime Minister, Churchill has been appointed, and advancing German armies in Europe must be dealt with. It is a pivotal moment in European history and this film centers of Churchill’s transformative resolve to fight the Nazis in lieu of negotiating with them. As the audience, we know the right way to proceed but only with our 20-20 hindsight. This movie teaches us that peace at all costs can be a risky ideology.

Darkest Hour is a wonderful film with a very endearing performance by Gary Oldman. While historical images of Churchill present a bulldog of a man, the character we see here is humble, uncertain, and deeply pained by his loss at Gallipoli. He starts the film with virtually no one in his corner – least of all the king. He event doubts himself at his “Darkest Hour” and gains strength from commoners on a subway train. Then he rouses himself and orchestrates one the greatest rescues in human history. Finally, he wins the hearts of Parliament and sets Britain on a difficult but ultimately victorious path. Regardless of the historical accuracy of the film, it is a compelling hero’s journey.

That’s my main complaint about the film, namely, that Churchill’s unorthodox decision to meet with the commoners on the London Underground never really happened. This turns out to be the critical moment when Churchill recognizes that the public has a steely resolve to defeat Hitler rather than appease him. It’s a transformative incident, as the Prime Minister now know what he must do. Too bad it never happened that way. While including this fictitious scene makes for a better drama, I would have preferred a more veridical account of history.

So in this micro-slice of Churchill’s hero’s journey, we’re privy to his transformation along with his transformative effect on others. The latter is illustrated in Churchill’s famous “We will fight them on the beaches” speech. His words were so rousing that even Churchill’s detractors (such as Chamberlain) were silenced and forever rendered irrelevant. Churchill’s heroism proves that heroes do not have to be tall, handsome, and conventionally charismatic to be effective. They can find their heroic voice in their own idiosyncratic way, much like Lincoln did in the US nearly a century earlier.

Darkest Hour is a well-produced slice of the life of Winston Churchill during the darkest hours of Britain’s history. Gary Oldman’s performance is Oscar-worthy. As is typical of such biopics, Churchill changes the hearts and minds of others more than he himself changes. As the audience we know what the historical events will be – but what we don’t know is the behind-the-scenes story. I give Darkest Hour 3 out of 5 Reels for an average movie-going experience. Winston Churchill gets a full 5 Heroes out of 5 for standing in the face of villainy and doing what had to be done to save his country and ultimately the world. And finally, the Parliament gets 3 out of 5 Deltas for their transformation due to Winston’s steadfast leadership.

I agree that Darkest Hour does an exemplary job of chronicling how an iconic leader met the challenges of a pivotal moment in world history. As with another recent movie, Lady Bird, this story offers but a tiny slice of our hero’s life, yet it still manages to show us the hero’s ability to transformatively rise above severe challenges. Gary Oldman did the near-impossible by portraying Churchill’s eccentricity and boldness so effectively. I award this film 4 Reels out of 5.

Churchill’s heroism is impressive in that he did what the best heroes among us manage to do, namely, find a way to do the right thing despite significant social pressures to do the wrong thing. His transformation can best be described as a metamorphosis from uncertainty to certainty, from hesitation to resolve, from thoughts of condoning evil to fighting it aggressively. As such I award him 4 Heroes out of 5 and 4 transformative Deltas out of 5, too.