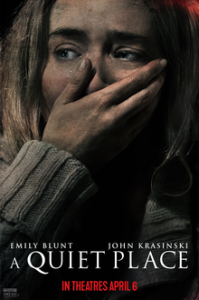 i just hope to find a Quiet Place to review this film. Let’s recap:

The year is 2020, and most of the earth’s population has been decimated by vicious creatures called the Death Angels. With hyper-sensitive hearing, these creatures attack and kill anything that emits the slightest sound. The Abbott family has managed to survive, thanks to their mastery of ASL (American Sign Language). There is Lee Abbott (John Krasinski), his wife Evelyn (Emily Blunt), and their three children Regan (Millicent Simmonds), Noah (Noah Jupe), and Beau (Cade Woodward).

While Lee and son Beau are on an excursion, Evelyn goes into labor and steps on a nail and emits a noise that attracts the beasts. Now it’s a game of cat and mouse as the Abbotts must evade the death angels while keeping silent.

Greg, it’s hard to imagine crafting a decent movie that is 90% silence, but that’s what A Quiet Place manages to accomplish. We’ve seen this villain before in the movies, a pure-evil animal-like villain in the same vein as Jaws and Alien. Only the most empathetic of us will show compassion for a creature than indiscriminately kills and eats anyone who makes a sound. And only the most foolish characters in a movie would choose to have a baby in a world with creatures that will devour a crying baby in mere seconds.

Despite a rather boring pure evil villain and the foolhardiness of the baby, this movie works rather well as a horror story. The creature is bloodthirsty and relentless, and as in every scary movie, there are plenty of false scares and predictable moments of suspense. Our main hero, Lee, is compelled to invent a device that will destroy the creatures, and our secondary family member heroes all manage to overcome their fears and transform into courageous, resourceful threats to the creatures.

I was favorably impressed with A Quiet Place. Unlike typical horror stories, this is not a tale strictly of fright, but a tale of survival and family. Young Regan blames herself for her youngest brother’s demise and imagines her father also blames her. The tension between father and daughter is exacerbated by the typical angst of a teen trying to become independent.

At first the fact that Regan was hearing impaired seemed like an ironic twist. Later we discover that her disability becomes the key to defeating the Death Angels. While the actress who plays Regan happens to be deaf, this is not what separates her from other young actresses. Millicent Simmonds virtually carries this film with her emotive face. She has only one other acting credit before A Quiet Place, but she delivers in a film that requires a strong emotive presence. Truly, she is the breakout star of this film – standing toe-to-toe with the likes of Emily Blunt and John Krasinski.

This movie heightened the suspense by having Evelyn deliver her baby on her own, within “earshot” of a Death Angel lurking in her house. Somehow she does it noiselessly and without any pain medication, which has to be the most remarkable feat in human history. The birthing scene had me on the edge of my seat, as did the film’s climax requiring Lee to sacrifice his life to save his children. It’s good to see good old fashioned ingenuity win the day in defeating these “eerie” beasts (pun intended).

By the way, the FX crew did a fabulous job creating a brand new villain with elaborate ears that were (fortunately) no way reminiscent of the Ferengi in Star Trek. These beasts were indeed terrifying and Krasinski deserves kudos for steering this cinematic ship with sharpness and alacrity. In terms of archetypes, we’ve certainly got the pure evil villain here, along with the scientist hero, the damsel in distress, the budding teen girl with attitude, and a small child who you know is going to do something foolish to attract trouble.

A Quiet Place delivers on both suspense and emotional levels. The actors do an amazing job of performing without much dialog – keeping us interested by their actions rather than their words. I give it 4 out of 5 Reels.

This is very much an ensemble cast with the father as the leader. In our book Reel Heroes and Villains we discuss the family ensemble and how important it is. We are also guided by the Moxnes model which uses the family as a paradigm. I give them 4 out of 5 Heroes.

Again, as an archetype, the FAMILY saves that day. Otherwise, we only see THE PURE EVIL monsters. Usually, this is a boring trope, but it works well here as it forces the family to work together. And what family would be complete without the ANGST-RIDDEN TEEN. I give these archetypes 3 out of 5 Arcs.

A Quiet Place is one of the best films in the horror genre that I’ve seen in a few years. This innovative new villainous menace brings a taut, quiet urgency to virtually every scene in the movie. The production, direction, and casting of A Quiet Place is just about perfect, although it’s pretty clear that the only reason the Abbotts decided to have a baby was for me to lose 10 years of my life in fright during the baby’s delivery. I give this movie 3 Reels out of 5.

The hero’s journey appears in bold relief here as the family is compelled to transform the way the think, move, and survive in this new dystopian world. Most importantly, Lee’s ability to construct a device capable of defeating these ear-monsters is the culmination of the journey for his family and his gift to humanity. I award these heroes 4 Hero points out of 5.

We’ve reviewed the many archetypes in the film, and I agree with you Greg that a rating of 3 archetype Arc points out of 5 seems about right.