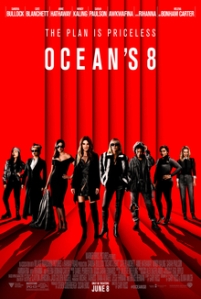 No, it’s proof that eight woman can do the work of eleven men. Let’s recap.

We learn that Danny Ocean’s younger sister, Debbie (Sandra Bullock), has been granted parole. She has big plans to steal a $150 million Cartier necklace, but she needs to assemble a team. Debbie recruits her former partner in crime, Lou (Cate Blanchett), and the two convince big-time celebrity Daphne Kluger (Anne Hathaway) to wear the necklace at a fancy gala dinner. Debbie then manipulates the man who sent her to jail, Claude Decker (Richard Armitage), into being Daphne’s date.

Debbie and Lou recruit a rag-tag fugitive team of women including a street-wise pickpocket, an aging down-on-her-luck fashion designer and a computer whiz-kid. They make their plan to drug Daphne who must go into the lady’s room where the pickpocket will remove the necklace and stash it on a platter destined for the kitchen. Hilarity ensues when things don’t go as planned.

Greg, Ocean’s Eight is a serviceable heist story with the much-needed and long overdue involvement of a team of women doing the heisting. Clearly, these ladies are a team of anti-heroes, and I’m going to shamelessly plug our 2015 book, Reel Heroes & Villains, in which we discuss ensemble teams serving as either heroes or anti-heroes in the movies.

Sandra Bullock’s character is the clear leader of the team and star of this film. Her character is satisfying in some ways and not so satisfying in others. We like her because she has at least five of the “great eight” traits of heroes – she’s smart, strong, resilient, charismatic, and inspiring. She’s been wronged in the past and is out for revenge, and if revenge means becoming a multi-millionaire in the process, so much the better. What is unsatisfying from a hero’s journey perspective is that she doesn’t change at all; she’s essentially the same clever, devious person at the end of this story as she was at the beginning. And maybe that’s by design. Still, a point we’ve hammered home for years is that good hero or anti-hero stories involve character transformation.

I have to say that I enjoyed this movie in part because it wasn’t all about girl-power. It was about a cadre of people who worked together for a common goal. The fact that they were all women was only incidental to the plot. So, it wasn’t as much as a cause film as it was a heist. And, as it was written by the same guy who brought us the other Ocean’s movies, it held up pretty well.

Having said that, there was a distinctly feminine slant to this story. Our heroes are after jewels, they have to dress up for a gala, and there’s a revenge subplot for Debbie’s old lover. There are also a dozen or so cameos from the world of fashion. These are all themes that appeal to a female audience. Still, it was a very entertaining heist movie regardless of your gender persuasion.

Ocean’s Eight has pretty much everything you’d want to see in a large-scale heist movie, and while the film is well-made, the fact that we’ve seen all this before in previous oceanic movies works against it. I did enjoy witnessing the dark side of Sandra Bullock — seeing her evil nature at work is equivalent to seeing Tom Hanks in a diabolical role. She’s very good at deceiving the parole board and pretty much everyone else in the movie. In all, this film deserves a rating of 3 Reels out of 5.

Our hero ensemble team is good, but to be honest, other than Sandra Bullock’s character, most of the team is pretty forgettable — with the exception of Helena Bonham Carter as the eccentric Rose Weil who bamboozles Daphne. These heroes don’t change in any meaningful way as a result of their journeys; they merely do their jobs and walk away with millions. We end up admiring their craftiness but little else. I award them 2 Hero points out of 5.

There are a few notable archetypes, such as the irredeemable villain/anti-hero, and a tech nerd kid who magically solves the problem of the necklace’s magnet fastener. Bullock plays a great mastermind anti-hero, and the insurance detective does his best Columbo archetype impression. All told, the archetypes are fairly meager, earning them just 2 Arcs out of 5.

I’m pretty much in agreement on all counts, Scott. This was a fun movie, but things went a little too well for my tastes. There was never really a time when the plan seemed in jeopardy. Nobody ever seemed in danger of getting caught. And the twist ending, while a surprise, didn’t really satisfy. I award Ocean’s Eight just 2 out of 5 Reels.

This is a classic anti-hero pattern where our heroes are not on the right side of the law, but we are pulling for them to win. The introduction of the ‘villain’ or ‘opposition’ character of insurance investigator John Frazier (James Corden) was a little odd. He didn’t come in until nearly the end and claimed not to be interested in arresting anyone, only in getting the jewels back. Otherwise, there wasn’t a true oppositional character which made the film a little flat. I give these characters just 2 out of 5 Heroes.

As for archetypes, I think you’ve covered it pretty well. I give them just 2 Arcs out of 5.