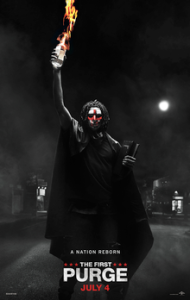 Scott, is this a movie about budding bulimics?

It’s the mid-21st century and the New Founding Fathers of America (NFFA) have displaced the two-party system. They have a problem – they promised an end to poverty and crime in American and now they have to deliver. They hire behavioral psychologist Dr. May Updale () who posits that one night of unbridled lawlessness will allow a release of aggression that will purge the participants of the need to commit crime. They set the experiment up on Staten Island and offer residents $5000 to stay the whole “Purge” night.

At first, things don’t go as the New Founding Fathers planned. At the outset of the purge, the citizens of Staten Island are not murdering each other at an acceptable rate. So the Founding Fathers unleash hired mercenaries to begin killing groups of people all over the island. Our heroes Dmitri (Y’lan Noel), Nya (Lex Scott Davis), and Isaiah (Joivan Wade) are now scrambling for their lives, hoping to survive the night.

Scott, in a sort of Memento fashion, the Purge franchise has been telling their story in reverse order. This third installment gives us the origin story of how the NFFA came to institute the Purge. This is, perhaps, the weakest of the three stories. While it is still an exciting action/adventure with horror elements, the story itself is disjointed and less coherent.

Perhaps the biggest problem I had with the film is that it doesn’t know who the main character, or ‘hero’ of the story is. It starts out following Nya and her brother Isaia, and ultimately settles on drug lord Dmitri. This lack of focus makes it difficult for the audience to rally behind any one character.

Along with that is the fact that when the film settles on Dmitri as the hero, it chooses a villainous character to be the moral heart of the film. Dmitri is not a nice guy. He is the local drug kingpin and is not averse to killing anyone who gets in his way. Not only that, but he has no problem selling drugs that are destroying his community – and then makes the moral decision to “save” his community from the mercenaries of the NFFA. I find it hard to reconcile these two disparate moral stances. I don’t see how Dmitri can be both a drug lord and community advocate.

Greg, I hear you and I also have different problems with the Purge movie franchise. Back in 2013, when we reviewed the first Purge film, I noted the complete absence of scientific support for the utility of purging. This criticism holds true for all the follow-up movies, including this one: the moviemakers get the science of emotional catharsis all wrong. Here’s what I wrote: “The premise here is that committing acts of violence has a cathartic effect. Research in psychology indicates exactly the opposite. Violence only begets more violence. Anger leads to more anger, aggression breeds more aggression.”

One could argue that this installment of the purge features another motive for the government’s support of it: The racist desire to exterminate African-Americans with the goal of saving resources devoted to social programs. I would buy that as a possible motive (especially given today’s rather unfortunate tolerance for intolerance), except there is a psychologist on staff for the government who parrots the usual BS about the psychological validity of cathartic aggression. At least the 2013 film spared us the indignity of a psychologist who knows very little about psychology. But here she is, showing no sign that she passed Psych 101 in college. She even has no idea why criminals and terrorists wear masks, which any beginning psych student knows: Masks disinhibit us into performing acts we would ordinarily not perform.

We’ve had this disagreement with every Purge film. I agree with your science, Scott. You’ve nailed it. But what this film showed us was 1) the psychologist in this story was wrong, and 2) government doesn’t care what science thinks. The politicians in this film will use and abuse science to create whatever narrative they need to reach their political ends. Surely, the creators of the Purge franchise are not trying to further the notion that we need a Purge. But instead are shining a bright light on the fact that politicians will do and say whatever they want to further their goals. And, quite possibly, the Purge is happening now in different ways.

First Purge is a movie franchise that desperately needs to be purged. Yes, Greg, I get it that the government doesn’t give a rat’s behind about the science. So we basically have the same corrupt government featured umpteen times in other movies, especially the recent dystopian movie franchises. There isn’t anything new or original here. A government sanctioned murder-playground isn’t very interesting. It’s the same formula of good people trapped in a bad situation, trying to survive the night. I was bored throughout this film and can only muster a rating of 1 single Reel out of 5.

I agree with you, Greg, that Dmitri’s heroism is hard to fathom, although I do admire both his entrepreneurial spirit and his loyalty to friends and family. Isaiah and Nya are two worthy heroes who fight to survive as well, but there really isn’t a good or interesting hero’s journey here. I give them 2 Hero points out of 5. With regard to archetypes, we have the demon archetype in the character of Skeletor (Rotimi Paul), the foolish adolescent archetype, the mastermind in Ario (Patch Darragh), and the purely evil government bureaucracy. These archetypes earn 3 Arcs out of 5.

Oh Scott, we will forever agree to disagree on the Purge franchise. I think this movie is the weakest in the series, but it illuminates an unsuspecting audience of the kinds of misuse of power and science that are prevalent in modern times. I am impressed with the subversive delivery of a complex message. While I might rate the Purge franchise high marks, I can only muster 3 out of 5 Reels for this, weaker, installment.

I had a lot of trouble with the motivations of Dmitri and cannot give him good marks as a hero. Likewise, the film had a hard time deciding if this was an ensemble offering or if Nya and Isaiah were the heroes. I give them 2 out 5 Heroes.

Skeletor was a rogue character in this film which confusingly was evil in the beginning, but ultimately his villainy and insane nature saved our heroes. And if I remember is effectively martyred in the end. I found the archetypes both lacking and inconsistent in First Purge and can only muster 2 out of 5 Arcs.