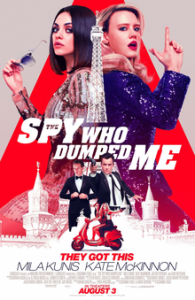 Greg, I just want to let you know that I’ll never dump you.

Your threats have no meaning to me, Scott. Let’s recap.

We meet two women, Audrey (Mila Kunis) and Morgan (Kate McKinnon). Audrey is in the process of breaking up with her hunky boyfriend Drew (Justin Theroux), a spy who is running for his life from other spies who are shooting at him. Just before he is seemingly killed, Drew gives Audrey a statue containing an extremely important flashdrive, and tells her to meet another spy at a cafe in Vienna, Austria.

So, off our two naive but strong women go to Austria to make the exchange. Only to find that it’s a set up. Everyone in the cafe is a spy and a massive gun fight ensues. Audrey handles herself well and our two plucky protagonists are on the run. They crack open the statue to find it’s got a thumb drive with the details of every worldwide bad guy’s financial information. Now it’s a city-by-city romp to return the drive to the good guys before the bad guys kill our heroes.

Greg, The Spy Who Dumped Me is no ordinary comedy. There are crisp action sequences and dramatic plot twists that elevate considerably what could have been throwaway lightweight fare. In the past, I’ve accused movies like this of “not knowing what it wants to be,” that is, an action movie or a comedy. I think in this case I’m giving the film credit for being both. Adding substance to the movie are its two fabulous stars, Kate McKinnon and Mila Kunis. I’ve read reviews noting the absence of chemistry between these two, but from my vantage point in the theater there were plenty of zesty sparks flying from and between this pair of aces.

A major theme in this film is the issue of trust. Audrey is told by Drew to trust no one, and her strict interpretation of that advice saves her life (and ends his). Morgan entrusts her parents with her most intimate secrets, even to an absurd degree. Various spies must trust each other and die either because they don’t trust or because they trust too much. One reason I’m really embracing the resurgence of women heroes in the movies is because topics like trust are less likely to emerge in male-dominated action films. These women are smart, resourceful action-comedy heroes who trust each other and themselves. This film left me thoroughly entertained.

Wow. I saw a completely different movie. But first, McKinnon is great. She’s emerging from the sort of wild-eyed, surreal characters she plays on SNL (and her previous films) into a true comic actress. Still, her Morgan Freeman character is a bit goofy. I’m hoping she’ll feel empowered to leave behind her nearly juvenile characters for more mature comic characters I know she has inside her.

But this film was very light fare. The plot was spliced out of every Bond-esque movie we’ve ever seen. The twist at the end of the boyfriend not really being dead was both predictable and unbelievable. The theme of trust was merely overlayed on a tapestry of exotic location action shots. The chemistry between the characters (at least on the screen) was ‘told’ to us by the women professing their loyalties – rather than ‘shown’ to us through their actions. I’m very encouraged by the number of strong female roles we’re seeing in the movies these days, but The Spy Who Dumped Me is not among those. This was a missed opportunity.

Ahh, it’s a shame you didn’t enjoy the Spy ride as much as I did, Greg. Maybe I’m just too smitten with these two lead actors. But I honestly believe there is more substance here than meets the eye. These two women “get” each other in deepers ways than two typical male lead characters would do in similar circumstances. By the way, I do agree with you about McKinnon selling herself short as an actor. I suspect she’ll step up and take on more mature roles in her future movie projects.

Overall, The Spy Who Dumped Me is a very good comedy-action film that showcases the acting chops of its two superstar acting heroes, Mila Kunis and Kate McKinnon. There are a couple of slow moments in the film that were better left on the editing room floor, but for the most part there is plenty of sizzle, sparks, and pizzazz throughout the movie. As a moviegoer, I was left satisfied with the comedic elements as well as the action components of the story. I give this movie 4 Reels out of 5.

Good hero stories take the hero outside of her comfort zone and into the danger zone. Our two heroes travel a tumultuous journey that stretches them and compels them to acquire the heroic traits of courage, resilience, and resourcefulness. They develop a self-confidence that has them thinking (accurately) that they have what it takes to become full-time spies – which of course is questionable but I’ve learned not to argue to the message that good movies are trying to convey. Audrey and Morgan support each other and grow into their heroic roles in commendable fashion. I award them 3 Hero points out of 5.

There are some good spy movie archetypes that include (of course) the spy, the double agent, the love interest, the mastermind, and his henchmen. These archetypes are standard fare in a movie like this, so all I can muster up is a rating of 2 Arcs out of 5.

Unlike you, Scott, I saw Spy as a simplistic buddy story with little spying and weak buddies. I like both the lead actors, but they were not heavily tasked in this film. Often comedy gives way to story in the movies. Sadly, neither the comedy nor the story were particularly good. I give The Spy Who Dumped Me just 2 Reels out of 5.

As heroes go, Audrey and Morgan are subpar fare. While they step up to the challenge, their dedication to each other is merely spoken rather than acted out. I give them just 2 Heroes out of 5. And you’ve listed the anemic showing of archetypes – I agree that they are worth only 2 out of 5 Arcs.