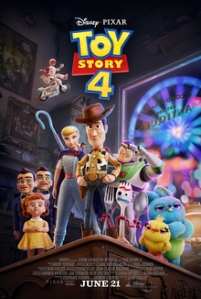 I’m not toying with you, Greg. It’s time to review this next movie.

Well, it’s the story of our lives. Let’s recap:

Once again we see Woody (Tom Hanks) and his fellow toys while they belong to Andy. Woody successfully rescues one of the toys in a flood, but while he’s busy doing that, some of the toys — including Bo Peep — are given away to another child. Soon Andy outgrows his toys and they’re given away to a kid named Bonnie (Madeleine McGraw). Woody learns that Bonnie is about to attend her first day of kindergarten.

But the rules are that you can bring no toys to school. So Woody hides in Bonnie’s backpack to make sure all goes well. At school, Bonnie feels alone without one of her favorite toys and doesn’t want to participate. A mean boy takes her art kit and throws it in the trash. Woody stealthily recovers the art supplies as well as a bit of trash and Bonnie makes a toy from the trash – a little spork with pipe cleaner arms and popsicle stick feet. When Bonnie writes her name on him he becomes an official toy and comes to life.

Greg, Toy Story 4 is a terrific movie for many of the reasons that we love movies. What struck me especially was how much the film is a treasure trove of priceless messages about heroic growth. The franchise’s catchphrase, To infinity and beyond, is an invitation for us all to become part of something bigger than ourselves. Heroes and heroic messages tend to transcend time and space. This overarching message that heroes live in “deep time” gives birth to several other more specific heroic messages, such as “No toys left behind.” The idea of leaving no one behind is a military value almost as old as warfare itself. We don’t abandon our friends when they are trapped or hurting; it is our duty and obligation to always be there for them.

Then there is the powerful message of “Listen to your inner voice.” This one is playfully illustrated by Buzz Lightyear’s tendency to make decisions by pressing one of the voice command buttons on his spacesuit. Hilariously, his random button-pushes never fail to deliver key advice that extricates him from the thorniest situations. Buzz knows he has the wisdom, he accesses it, and then he follows through. This wisdom of hidden inner insight is endemic to every hero tale, from Dorothy discovering she’s always possessed the key to going home in The Wizard of Oz to Harry Potter unearthing his hidden powers of wizardry.

Finally, there is the deep and powerful message that we should “Be of service to all people, even those who have hurt you — maybe even especially those who have hurt you.” Our hero Woody is about to have his voicebox stolen by Gabby who wants it for herself. At first, he’s outraged but then he discovers that Gabby wants the voice box because it may be the only way she’ll ever be loved by a child. Woody then sets out to help Gabby become adopted by a kid so that she experiences love the way he has been able to. It’s an extremely heartwarming message that our troubled world desperately needs to hear — and to apply.

Scott, you’ve only scratched the surface of the richness of Toy Story 4. One of the rules of storytelling is that “everyone must want something.” And TS4 is no exception. Bo Peep wants to give carnival toys homes. Annie the Cowgirl wants to be sheriff. Gabby wants to be loved. Every toy in the carnival wants to go home with a child. This is very difficult work for a writer and Pixar delivers every time.

There was another set of messages here that jumped out at me. This is Woody’s goodbye story. As a veteran hero, he becomes the mentor to young Forky. He has to teach Forky that as a child’s toy, he must be loyal to his child. Not only that but as the favorite toy Forky has leadership responsibilities among the other toys. We’ve seen this over and over in movies that past heroes often become sage mentors.

Also, there’s the sense that Woody has done his job as a toy. He graduates and even retires from the duties of serving his child and becomes a ‘lost toy.’ He decides to live with the love of his life – Little Bo Peep. Now that his duties to his child have been dispatched, he can live for himself. Not unlike adults whose children have flown the nest.

I did have a couple of issues with the film. John Lassiter was notably absent from the credits. Lassiter has come under fire in the new #MeToo culture for being too touchy-feely. Some people have been uncomfortable with his incessant hugging. While he wasn’t dismissed from Pixar, he has stepped back from the company. Another problem I had with the film was how very white it was. With the exception of a few ancillary characters, everyone appeared to be of European ancestry. In a modern era, there’s little reason for that.

Finally, Gabby was a problematic villain in this story. She is clearly driven by the lack of love from a child. And she does some terrible things. In the end, Woody and friends take pity on her and help her find a home. This transformation seemed to serve the plot – but not the character. But hey, it’s a kid’s film, right?

Toy Story 4 is another Pixar triumph that successfully entertains adults and children alike. As you mention, Greg, there is a lot packed into this 90 minutes, yet somehow the pacing seems just right. I’ve noted how the filmmakers weave some wonderful messages into their storytelling, and the result is one of the most satisfying children’s tales I’ve seen in several years. I award Toy Story 4 a total of 4 Reels out of 5.

Our hero Woody follows the classic pattern of Joseph Campbell’s hero monomyth by leaving his safe, familiar world and embarking on a heroic effort to help many of his friends, including Bonnie, Forky, and Bo. I have to say that Woody spends so much time rescuing others that he veers perilously close to being a codependent, but probably a more charitable and accurate view of Woody is that he’ll do whatever it takes to help those in need. For this reason, Woody earns the full 5 Hero points out of 5.

I’ve already detailed the depth of the messages in this film, namely, the ideas of leaving no one behind, listening to your inner voice (AKA your “true” self), and helping even those people who have been hurtful. These messages are illustrated through beautiful storytelling and impart terrific wisdom to audiences. I give these messages the full 5 Message points out of 5.

Toy Story 4 is a fitting end to the Toy Story franchise. Clocking in at just 90 minutes, I was surprised just how dense the storytelling is. There are a lot of characters and none get short shrift. The quality of the story, animation, and voice actors is top-notch. Still, I found myself bored through most of it and will award 4 out of 5 Reels.

Woody is less a hero in this film and more of the veteran Mentor. This is the second film we’ve reviewed this year that I might call a “Mentor’s Journey” (the other one being A Dog’s Journey). Woody has seen it all and is now passing his wisdom to a new generation of toys. He even passed his tin star on to Annie the Cowgirl. I give Woodie 4 out of 5 Hero points.

The message of accepting people as they are is a popular one this year. Also, taking care of those you love (leave no one behind), and passing on one’s lessons to the next generation are all good lessons. I also appreciated the example of looking up to one’s elders as a takeaway message. I giveTS4 4 out of 5 Message points.