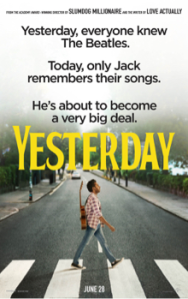 Greg, I’ll get to it tomorrow, which two days from now will be Yesterday. Let’s recap.

We’re introduced to Jack Malick (Himesh Patel). He’s a struggling singer/songwriter in the small town of Lowestoft, England. He’s friends with childhood friend Ellie who is his manager. He has been trying to make a living at performing but he’s just not that good. One night he decides to call it quits, but Ellie (Lily James) talks him out of it. As he rides his bicycle home, a 12-second power outage wreaks havoc worldwide – and causes a bus to hit Jack on his bike. When he wakes up, Ellie is there, but any memory or evidence of the Beatles has vanished – except for Jack. He remembers all their songs.

Jack realizes that he can make it big, and I mean really big, as the man who takes credit for writing and singing all the Beatles’ songs. At first, no one takes him seriously and he has trouble getting anyone to notice him singing amazing songs such as Let it Be. Gradually, though, his genius becomes recognized. The problem, however, is that his growing fame and fortune takes him away from England — and away from his true love, Ellie.

Scott, Yesterday is the latest in a spate of movies reviving the songs of the Baby Boomer generation in a bid to present them for Millennials. We saw this last year with Bohemian Rhapsody and last month with Rocketman. And it will continue next month with the Bruce Springsteen inspired Blinded by the Light. (But I blame Mama Mia for starting the trend).

This is a simple romantic comedy with the soundtrack supplied by the music of the Beatles. It uses the alternate-universe trope (similar to What Women Want) to create an opportunity for our hero to find out what it would be like to be a rock star. And in the process have to choose between a simple life with Ellie – or superstardom. (Which feels a bit like Notting Hill in some ways). And of course, in the end, he realizes the error of his ways and leaves the big stage for life with the girl he’s neglected for years.

Yesterday is an entertaining film with one large plot hole – which I won’t spend time on. There are other things missing from this alternate timeline (Coca Cola, Oasis, and Harry Potter, to name a few). And one important event – the death of John Lennon. Jack’s visit with a now 78-year-old Lennon is very touching. It’s the inspiration that Jack needed to set his life right.

There’s also an appearance by Kate McKinnon as a music executive who sees Jack as a commodity and not as a person. I was looking forward to a great performance from McKinnon who has been featured in several films in the last few years. But I was disappointed as she can’t seem to “play it straight” – always going for the slightly bizarre, crazed caricature rather than someone with depth. This would have been the perfect opportunity for McKinnon to step outside the facade she’s created for her SNL characters. I hope she can break out of this mold because under all that clown makeup, I expect she’s an amazing actress.

Greg, Yesterday is a surprisingly sweet movie about two virtues that are essential to our well-being: Love and Integrity. Jack struggles with both, mostly because he loses sight of who he really is and what’s really important in life. First, we see that Jack is one of these oblivious men who don’t realize when another woman likes him, or maybe he takes this woman (Ellie) for granted. Only when she’s about to leave him does he begin to appreciate her. This is a great lesson for us all – we should never take love, or the people we love, for granted.

Second, Jack forgets that fame and fortune mean nothing if they are obtained dishonestly. He probably already knew this, just as he also knew (but forgot) how much Ellie meant to him. This film works well because Jack is an “everyman”. He isn’t super attractive and he isn’t super bright. But he means well and has a good heart. So when Jack finally does the right thing by publicly proclaiming his love for Ellie and by confessing that the songs aren’t his, we applaud his heroic integrity and hope that we would all do the same thing if we were in his shoes.

Greg, you mention a scene toward the end of the film that truly moved me. In the alternate timeline, Jack is sent to meet an elderly John Lennon, whose songs he has stolen. In our timeline, Lennon has been dead since being assassinated at the age of 40 in 1980. But in this timeline, Lennon is still alive, at peace, and as wise as ever. The visual of seeing and hearing Lennon — one of my heroes – packed quite an emotional punch for me. Apparently, no CGI was used and the actor was able to portray Lennon’s aged appearance to perfection. The voice was not deep enough, but I nitpick. In this movie Lennon serves as a terrific mentor to Jack, instructing Jack to be true to himself and to tell Ellie he loves her. This mentorship moment is exactly what this film needed to tell an authentic hero’s journey.

Yesterday is not a complicated film and succeeds in sharing the Beatles music with the audience. The final scene with Lennon appears to be the point of the film. In a world without the Beatles, what matters is the message of love and integrity. As a romantic comedy, it plays very nicely, indeed. I was a little disappointed that a scene in the trailers (where McCartney and Starr confront Jack) was a dream sequence in the film. Dream sequences are usually a cheat, to begin with – and to use it in the trailer was a double-cheat. I give Yesterday 3 out of 5 Reels.

Jack is a typical RomCom hero. He’s oblivious to the beautiful nubile woman in front of him and is distracted by fame and fortune. He gets two chances to do right by her and misses both of them. There’s the classic “chase” scene, the profession of love, and finally the on-stage admission of the big secret. I give Jack 3 out of 5 Heroes.

The message of love and integrity is delivered by John Lennon himself. There wasn’t much mention of the other Beatles in the film – especially George Harrison. I give this film 3 out of 5 Message points.

Yesterday is one of those movies that is difficult for me to evaluate because I am a rabid Beatles fanatic. Of course, I loved the music in the movie and I applaud the originality of the premise focusing on what would happen if you (and only you) knew all the Beatles songs but no one else did. This movie takes that storyline to its much-needed conclusion that any of us would be tempted to take credit for the Beatles’ genius – but only to a point. The love story between Jack and Ellie also has a gooey and heartwarming ending. I give Yesterday 4 Reels out of 5.

Jack’s hero’s journey is certainly entertaining and placed him in the unique position of being falsely hailed as the most gifted songwriter of all time. Jack goes through the hero’s stages like a pro, encountering dark characters such as Kate McKinnon but also getting help from Ellie, from John Lennon, and from his own conscience. Jack is transformed by his experience, and in fact, we learned that he needed to go through the journey to find his soulmate, Ellie. I award Jack 4 Hero points out of 5.

I’ve already touched on the main messages of the film, namely, the idea that we are called to remain true to ourselves, that ill-gotten fame will rot our souls, and that the love we seek in life may be standing right in front of us. These are worthy messages well worth my time in the theater. Good point, Greg, about the film ignoring the contributions of George Harrison — especially since Jack tries to take credit for singing some of George’s most famous songs such as Something, Here Comes the Sun, and While My Guitar Gently Weeps. Overall I award the messages 4 Message points out of 5.