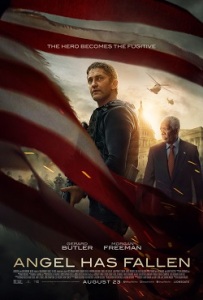 Scott, in this third installment, it looks like Gerard Butler loses his halo.

You can’t have a movie about an angel unless it’s a fallen one, Greg. Let’s recap.

Mike Banning (Gerard Butler) is back and this time he’s fly fishing with his buddy the President of the United States, Allan Trumbull (Morgan Freeman). Banning is suffering from concussions and his doctors are advising him to retire – or take a desk job. The boys are enjoying the day when President Trumbell offers Mike a desk job – Director of the Secret Service. Banning balks, after all, he recently had a chat with an old friend about how they are “lions.” Banning’s headaches require him to return to shore after being relieved by another agent. And then there’s a massive drone attack requiring Banning to return to save the President. Everyone is killed except Banning and Trumbell. Trumbell is in a coma and Banning is implicated in the attack.

During transport to prison, Banning’s van is ambushed in a hail of bullets. Banning manages to escape and needs a hideout where no one can find him. The one place no one knows about is his father’s cabin located in a remote forested region of West Virginia. Clay Banning (Nick Nolte) has the entire wooded area rigged with explosives, so they are prepared for when the bad guys responsible for the attack on Trumbell come after them. Banning’s only hope is to reach Trumbell and convince him of the danger to the presidency.

Scott, the “Has Fallen” series of movies are often hard to believe with their over-the-top action and many plot holes. But I’m endeared to the Banning character as a guy who is always on the path to redemption. Who doesn’t love Morgan Freeman in just about any role? In this case the grandfatherly President of the United States. And nobody plays “comatose” better than Morgan Freeman (he spends easily half the film in such a state).

As with the previous installments, Banning has fallen on hard times as everyone believes he’s the culprit. There are no surprises here. We see the “Checkov’s Gun” on the wall when Banning’s old war buddy Wade Jennings (Danny Huston) comes to dinner and reminds Banning that they’re both “lions.” We know Jennings is up to no good. And sure enough, he’s framed Banning. But it’s all good because this is what we expect from this franchise.

Banning is a classic redeemed hero. In each film, he does something that causes him to fall from grace, become a suspect, and ultimately redeem himself and save the President. There’s no particular message here, just a good time and feeling good about the underdog constantly coming back.

Yep, that about sums it up, Gregger. Angel Has Fallen is one of those movies that’s so easy to mock and to spoof. There are absurdly choreographed fight scenes, shoot-em-up scenes, explosions galore, and hammy interpersonal exchanges featuring even hammier dialogue. Yet somehow I ended up liking Angel Has Fallen, perhaps because it tries so hard to be good despite falling short here and there. The good moments involve the father and son story, with Nick Nolte’s badass performance being a real highlight for me. This movie needed more Nick Nolte and – no offense to Gerard Butler – less Gerard Butler.

Angel Has Fallen is kind of a weird morphed combination of The Fugitive and Red. Our hero Mike Banning is a fugitive from justice, evading law enforcement while doing his best Harrison Ford imitation. The FBI agent after him, played by Jada Pinkett Smith was a disappointing version of Tommy Lee Jones. She should have been a more interesting character. Then the movie turns into Red when we encounter the retired and extremely dangerous Clay Banning, who may be old and crotchety but he is one old fart you do not want to cross.

My main problem with Angel Has Fallen is that it once again glorifies guns, gunfire, bullets, mass shootings, and militarized violence. The movie is so much more enjoyable when it focuses on the story, the characters, the pain they have encountered and how they’re overcoming it. As moviegoers, we thirst for the hero’s journey, not an hour of violent gun-battles. With so many mass shootings in American society and all the tremendous suffering that goes with them, you’d think that America might wake up to the importance of not making shootings a central part of our entertainment.

That’s right Scott, guns don’t kill people – movies do. But anyway, I liked this film. It wasn’t very complicated and despite the fact that I saw the ending a mile away (except the demise of Agent Jada Pinkett Smith – that was unfortunate as she could have come back in later installments), I still had a good time. I give Angel Has Fallen 3 out of 5 Reels.

Banning is the ongoingly, continuingly, redeemed hero – almost to the point of being unbelievable. I mean, a guy like this could never last in politics with as many mistakes or implicated mistakes as Banning has. Still, as told on-screen, Banning does a good job of redeeming himself and earns 3 out of 5 Heroes.

I’ll be curious if the Angel Has Fallen franchise has some additional legs and earns yet another installment. It could be a fallen franchise, with the premise of the fallen Banning running on fallen fumes. I was entertained by this particular movie but not overly impressed with it, especially it’s violence. I give it 3 Reels out of 5.

As you point out, Greg, this is yet another story of hyper-redemption for our hero Banning, and we all know that redemption is a hallmark characteristic of all great heroes. But how many times can one man bounce back? As long as moviegoers keep voting with their theater tickets, Banning will keep bouncing. I give our hero 3 Hero points out of 5.

Greg, I guess I disagree about there not being a few good messages in this film. One pretty solid message that this movie conveys about life is that war does unspeakable damage to individual lives and to families. This is seen in both generations of our hero Banning’s life. A second message is that sometimes it’s better to surrender to a situation and exit it than it is to injure people in that situation. Yet Clay Banning’s admitted regret about his surrender and exit leaves open the possibility that working through extremely tough circumstances (such as PTSD) may be the better choice. We also learn that we can make amends to the people we hurt. Finally, Mike Banning’s fierce loyalty to the President – and vice versa – is a very nice message about being loyal and faithful to our friends. I give this movie 4 Message point out of 5.