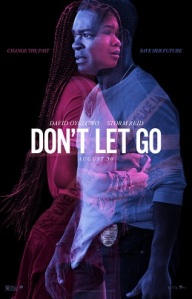 I couldn’t let go of this flawed, but entertaining time-travel/action-adventure/crime drama. Let’s recap:

We meet homicide detective Jack Radcliffe (David Oyelowo), who receives a phone call from his niece Ashley (Storm Reid). She needs him to pick her up from the mall because her parents forgot to get her. Soon afterward, Jack gets another call from Ashley, only this time she is begging for help. When Jack arrives at her home, he discovers that Ashley, her parents, and her dog have all been brutally murdered.

Two weeks later, Radcliffe is obsessed with the case. His boss and partner admonish him to “let it go.” Radcliffe is about to back off when he gets a call from Ashley – 2 weeks in the past. Now, Radcliffe is on a mission to save his niece and her family before the inevitable happens.

Don’t Let Go is a rare and interesting hybrid of a movie that combines a standard shoot-em-up crime story with the sci-fi premise of a repeating time loop. I rather liked it, despite it being somewhat predictable and a bit derivative of movies we’ve seen before in both genres. The storyline involving Don’t Let Go’s temporal loop reminds me of an episode of Star Trek: Discovery entitled Magic to Make the Sanest Man Go Mad, where the good guy uses a repeating time loop to learn (eventually) how to catch the bad guy. In both Star Trek and in Don’t Let Go, it’s all totally preposterous — yet here it is also poignant because the priceless lives of a young girl and her parents are at stake.

This year we’re examining and evaluating the message of the movies that we review. In Don’t Let Go, there really isn’t any earth-shattering message other than maybe the importance of resilience and tenacity, as suggested in the film’s title. Our hero Jack keeps plugging away at solving the problem presented to him, no matter how many times he gets shot in the abdomen and no matter how many times his boss at work blocks him from discovering the truth. Our other hero, Ashley, is also an unstoppable force in following Jack’s directions so that her family’s murder can be prevented. Another hugely important message is this: Don’t ever paint your bedroom windows shut. Doing so could kill you.

Yes, this film reminds me of 2000’s Frequency – where a firefighter son receives messages from his 30-years-dead father over shortwave radio. It was a good implementation of the trope and I enjoyed it. But you are so right about how preposterous the plot elements are. Jack gets shot in the gut twice and still manages to hobble around for hours. He breaks into the evidence room several times. He walks all over a crime scene and removes evidence (that the evidence team apparently forgot) without getting in trouble.

And, as with another film we reviewed this month (Angel Has Fallen) we know from the start who the bad guy is. It’s Jack’s partner. Why? Because there are no other characters introduced who could be the bad guy. And because he keeps trying to get Jack to “let go” of the case. Yeah, he’s the guy.

I love time travel films and I enjoyed Don’t Let Go. But the filmmakers didn’t take care of the time jumps. After the second time dilation sequence, I lost track of the plot. I couldn’t tell where I was in Jack or Ashley’s timelines. And the “ticking bomb” in the story moved as well due to Ashley changing events. So I got a bit lost at about the half-way point.

Still, the performances are very good. David Oyelowo is always a strong presence on-screen. And despite the improbability of the scenes he was forced to act in, delivers with conviction. And young Storm Reid is a force to be reckoned with. She already has a long list of accomplishments (including A Wrinkle in Time and 12 Years a Slave). Her performance here as a youth struggling with an impossible choice (to save herself or her family) was heart-wrenching.

Don’t Let Go is pretty solid entertainment that surprised me with its sci-fi time-change element. It all worked pretty well, even if our hero Jack did indeed bleed enough to kill ten men, yet somehow was able to drive, run, shoot, and basically be a superhero mentor to Ashley. With the exception of the time loop gimmick, this movie is pretty predictable yet I was still able to semi-enjoy it. I give Don’t Let Go a rating of 3 Reels out of 5.

The hero tandem of Ashley and Jack are in a fight to save Ashley and her family, and there is plenty of tense, taught action. But, sadly, there isn’t a whole lot of heroic growth and transformation going on. This movie is basically a survival story, and at that level it works but there is no deeper level that we can derive much satisfaction from. For that reason I give Don’t Let Go only 2 Hero points out of 5.

As I mentioned, this movie’s emphasis on sheer survival means that the message of the story is limited to the importance of virtues such as courage and resilience. These are most definitely heroic traits, but they are traits of self-preservation rather than serving the greater good, which is what the best heroes do. For that reason I can only give 2 Message points out of 5.

I think we’re agreed on all counts here, Scott. As entertainment, this was a pretty average film and overly predictable. I give it 3 out of 5 Reels.

I think we might be able to count this as a “buddy hero” story since Jack and Ashley have to work together to prevent her murder. In a strange twist, at about the halfway point, the film starts to focus on Ashley as much, or even more than Jack. I give them 2 out of 5 Hero points.

And there is hardly any message here. I agree with you that it’s all about never give up, never surrender, and “Don’t Let Go” of those you love – 1 out of 5 Message points.